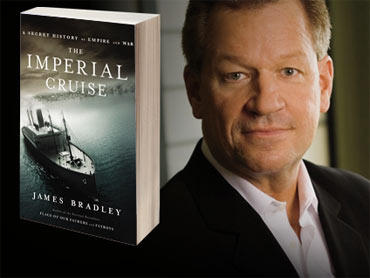 (CBS/Brown & Company)
His father helped raise the flag at Iwo Jima. James Bradley later wrote a book about his dad, but that experience also got him started on another project: When did Japanese expansionism really begin and what was the U.S. position at that early historical stage. His latest work "The Imperial Cruise" is the result of that investigation.

James Bradley: My father was one of the guys who raised the flag at Iwo Jima. After writing two books about WWII in the Pacific, I wondered about the source of that conflict. The explanation we're given is Pearl Harbor, but I realized that the Japanese attack on Pearl Harbor wasn't the invasion of the U.S. The Japanese weren't intending on going to California, but instead they wanted to continue with their game, which was expansion in Asia. So my father wasn't on Iwo Jima to protect his mother in Wisconsin, but to stop the Japanese from expanding further in Asia. So I wondered, "When did Japanese expansionism begin and what was the U.S. position at the initial stage?" It's then that I found the spark that lit the fuse on what we would call WWII in the Pacific happened in the summer of 1905 on this imperial cruise.

JB: That there was so much hidden history to uncover. I had written two books on WWII in the Pacific and had earned a degree in East Asian history, but I never knew that in the summer of 1905 President Theodore Roosevelt had lit the long fuse on the events that would catapult my father from the hills of Wisconsin out atop a hill six hundred miles south of Tokyo on an island the Japanese called Iwo Jima.

JB: I would be spending more time on the James Bradley Peace Foundation, which sends American high school students to China and Japan for one year. If we had tens of thousands of Americans with experience living in foreign countries, we might be able to talk our differences out rather than fighting them out.

JB: I'm taking a stab at some of the books given to me as presents over the last six years that I had been working on The Imperial Cruise.

JB: What's next for you?

I'm interested in exploring Franklin Delano Roosevelt's actions in China during WWII. I am fascinated about all the hidden history still waiting to be uncovered.