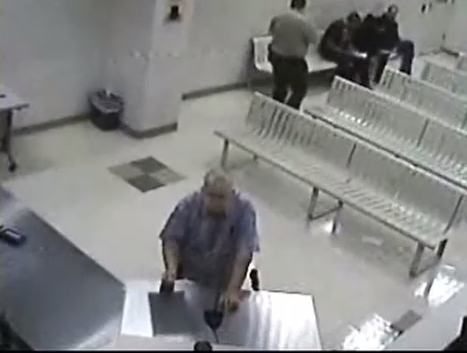 Father John Feit, who was arrested in Arizona this week for the murder of Texas beauty queen Irene Garza more than 55-years ago, appeared in court Wednesday and chose to fight his extradition to Texas.

Feit, who used a walker to move slowly about the courtroom and sounded dazed, used his time before the judge to register his confusion over the murder charge he faces for Garza's death, according to footage of the appearance published by CBS station KPHO in Phoenix.

"It almost sounds as though waiving extradition is a better course but this whole thing thing makes no sense because the crime in question took place in 1960," he told the judge after she had him read what she called a "fugitive rights form" required under Arizona law.

Garza was found in an irrigation canal in McAllen, Texas in April 1960. The last time anybody saw the beauty queen, she was going to confession at Sacred Heart Catholic Church. Feit, 27 at the time, heard that confession. He was a visiting priest.

Feit said while he understood there was no statute of limitations on murder, he had been questioned "extensively" in 2003 and had DNA taken from him. "That was 13 years ago," he said, adding "I'm totally puzzled why something is coming up now, after the fact."

While police interviewed hundreds of people in connection with Garza's murder, Feit was their focus. He was the last person to see Garza alive.

As the investigation continued, another young woman came forward and said Feit attacked her three weeks before Garza's murder. Feit was tried in 1961, but the jury deadlocked. To avoid another trial, he pleaded guilty to a lesser charge and was fined $500.

No charges were filed against Feit in Garza's murder. Feit eventually left McAllen, and the case went cold amid what many believed was a cover-up by the church.

Then in 2002, Texas Ranger Rudy Jaramillo got information about a new witness, a former monk. That monk said Feit told him during counseling sessions about attacking Garza. Feit later claimed not remember the conversation and denied killing Garza.

Another priest later said Feit had told him the same thing.

Garza's family has been pushing the Hidalgo County District Attorney's Office for years to move on the case, demanding justice for Garza.

Feit, now an 83-year-old grandfather, had been living in a Scottsdale retirement community prior to his arrest.

Had he decided not to fight extradition, he would have spent up to 3o days in jail for Texas authorities to come pick him up, provided no local were pending against him.

Texas has 90 days to complete the extradition process and can waive it anytime he wants. He is due back in court on Feb. 24.

He said a family attorney to represent him.