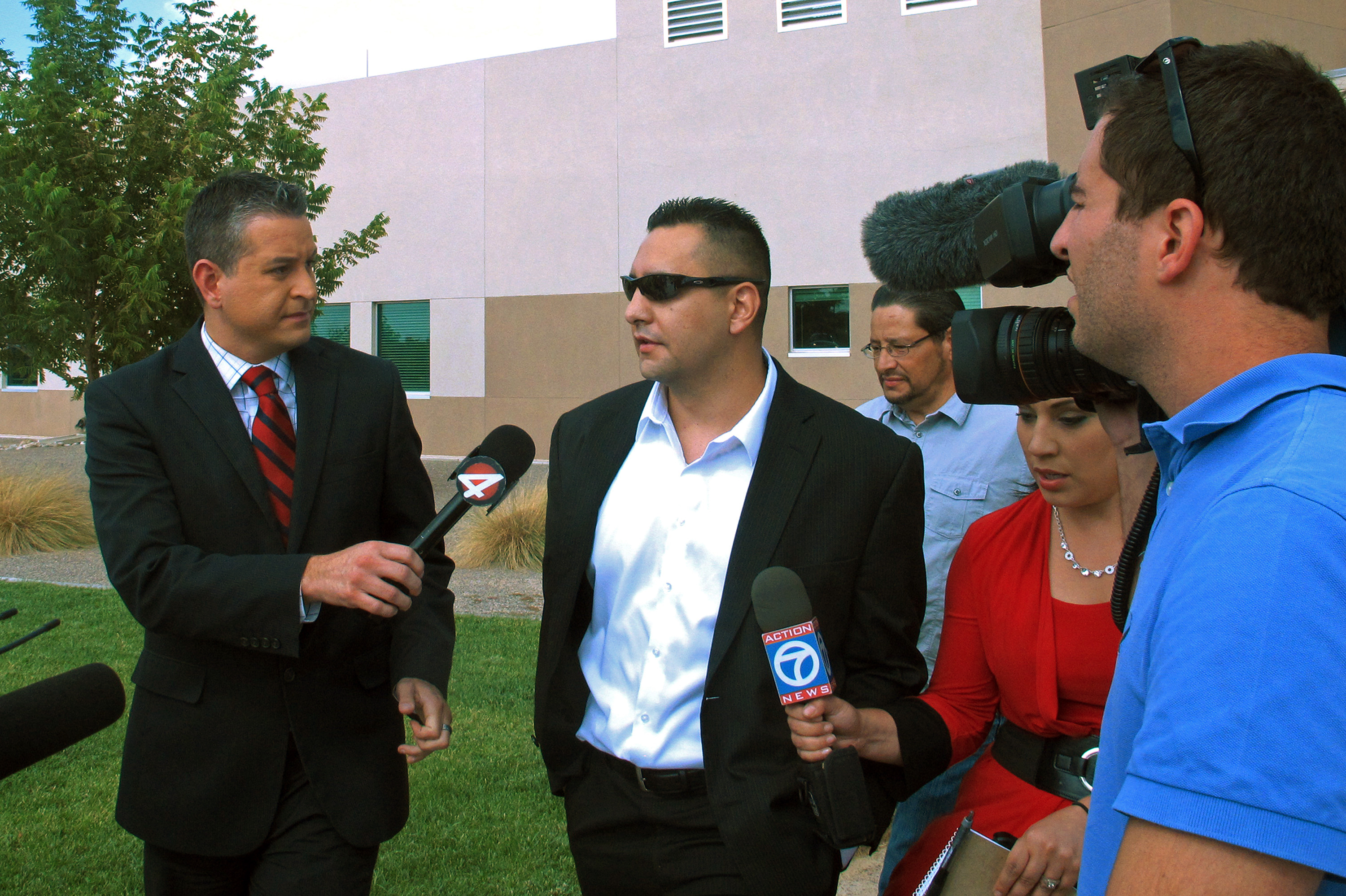 BERNALILLO, N.M. A former Albuquerque police officer clutched rosary beads, made the sign of a cross and hugged his lawyer Tuesday as he was cleared of charges he murdered his estranged wife and made it look like a suicide in order to free himself from a volatile, adulterous marriage.

"I told y'all from the very beginning I was innocent," 32-year-old Levi Chavez said after a jury or nine women and three men acquitted him of murder and tampering with evidence charges.

Chavez was accused of killing his hairdresser wife, Tera, with his police-issued handgun and making it look like a suicide in October 2007. The trial revealed a crumbling marriage that was filled with extramarital affairs, including a love triangle at the hair salon where Tera Chavez worked.

The case became big news in New Mexico with its many tawdry elements and the questions it raised about the practices of the Albuquerque Police Department, which is under investigation by the U.S. Justice Department over a series of police shootings.

The trial included allegations that Albuquerque police officers who responded to the Chavez home in nearby Los Lunas removed and even flushed key evidence down a toilet. Witnesses also described a workplace where interoffice romance was quite common, including both Levi and Tera Chavez having affairs with members of the police force.

Prosecutors also said Tera Chavez had discovered her husband staged the theft of his pickup truck for insurance money, and was threatening to turn him in.

After the verdict was read, Chavez embraced his attorney, David Serna, who said, "What did I tell you?" Chavez's family then surrounded him and they prayed.

Prosecutor Bryan McKay declined comment after the verdict. He had sought life in prison.

Before the verdict was read, state District Judge George Eichwald ordered the families to exit the courtroom separately after the proceedings ended, noting the tension that has persisted on opposite sides of the courtroom throughout the trial.

The family of Tera Chavez left in tears.

"Justice was not served," said her father, Joseph Cordova.

The jury began deliberations on Monday and took about 10 hours to reach the verdict.

In the final days of the monthlong trial, Chavez took the stand and acknowledged having a string of mistresses, searching a website on how to kill someone with martial arts moves, and ignoring his wife's calls for help.

However, the disgraced former officer strongly denied that he killed his wife.

"Absolutely not," he said when asked by his defense attorney if he killed Tera Chavez.

After the couple had their first child when Tera was a teenager, Chavez testified that he got his GED and joined the U.S. Coast Guard. The pair moved to Virginia and later Michigan, but they faced a rocky marriage throughout. The couple later had a second child.

He also testified that Tera Chavez threatened suicide "countless times," saying she couldn't live without him. But he said he never believed her and ignored 176 phone calls from her the day before he found her dead.

Prosecutors questioned whether Tera Chavez would have been able to fire the fatal shot.

There was a bullet in the gun's chamber when it was found next to her body, and the magazine was no longer attached to the weapon. Prosecutors contended it would have been impossible for the woman to press the button to release the magazine after shooting herself in the mouth.

The trial grabbed headlines with its details of infidelity. One mistress of the defendant testified she continued to get her hair cut by Tera Chavez while she was sleeping with Levi Chavez. Another mistress, a woman who sold Chavez a cellphone, testified that she had sex with him at his home just days after his wife was found dead.

Other witnesses said Tera Chavez was having an affair with an Albuquerque police officer who was married to her maid of honor. They had sex in the back of a hair salon where she worked, according to testimony.

In closing arguments, prosecutor told jurors Chavez went to his wife's house, found her asleep in front of the television, shoved his department-issued gun in her mouth, and pulled the trigger.

Then he showered and went to spend the night with a girlfriend, McKay said.

He faulted Chavez for giving conflicting stories to investigators and his mistresses. "He's got an explanation for everything," McKay said. "But it doesn't make sense."

Asked what he is going to do now, Levi Chavez said, "I'm going to go to church, pray my rosary and thank my Virgin Mary."