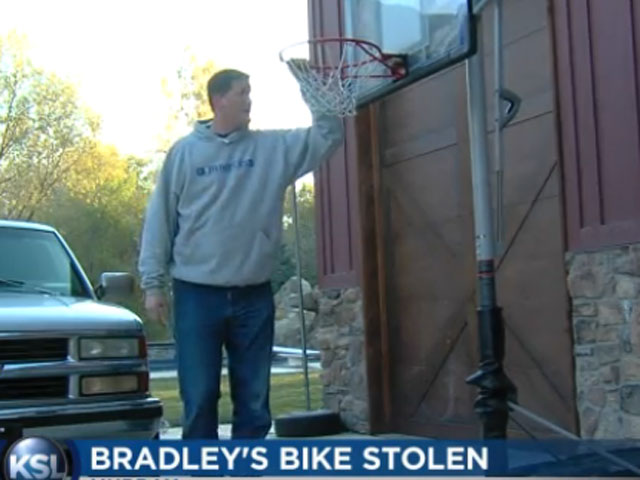 (CBS/AP) MURRAY, Utah - When you're 7-feet-6-inches tall and your bicycle is stolen, you can't just head on over to Joe's bike shop and buy a replacement.

"There's no way they could have ridden it away," Bradley said. "It's kind of baffling. I think it will turn up."

The big man was right.

A random search of a residence by state probation and parole officials turned up the bike Thursday afternoon in the town, where Bradley has a home, police said. Joshua Carter, 34, was arrested on suspicion of possession of stolen property and felony theft, Murray police Sgt. Brian Wright said.

Bradley, who has been riding the bicycle since packing on the pounds after his retirement following 13 NBA seasons, was thrilled at the news.

Authorities wouldn't reveal a motive for the theft, but Bradley speculated that anybody who took it simply was looking for something they could pawn for quick cash.

They certainly weren't going to ride it - as it is about 50 percent larger than what a normal-sized person would ride. Trek never even included a serial number when it built the bike in 2005 because it is so unique.

"I'm guessing he just walked it away," Wright said of the suspect, who stands just 6-foot.

Bradley found it strange that only the bicycle, black with a "76" painted on the frame to denote Bradley's height (7'6") was taken a week ago Friday from a barn next to his gated home. Seven other bicycles used by his six children and wife weren't touched, nor were his boat, tools or even a $200 pair of Oakley sunglasses stuffed into his bicycle helmet.

"It's a stolen bike, not the end of the world," Bradley said before knowing it had been recovered. "It's just kind of a weird story. It's not like I can go down to the bike shop and buy a new bike. It'd be the same if my clothes were stolen."

The ex-NBA big man for the Philadelphia 76ers, New Jersey Nets, and Dallas Mavericks needs just about everything custom-made, from clothes and chairs to kitchen counters and doorways.

In 2010, the 39-year-old Bradley ran for a seat in the Utah House of Representatives but lost.