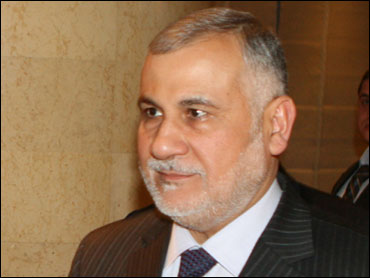 Iraq's former trade minister was arrested Saturday in a burgeoning corruption scandal after his plane was ordered back to Baghdad while en route to the United Arab Emirates, officials said.

The fight against corruption is emerging as a major issue in Iraq, with many Iraqis convinced that graft and government mismanagement are nearly as a great a threat to the country as armed insurgency.

Sensing public discontent, Prime Minister Nouri al-Maliki's government has seized on the issue, promising stern action against wrongdoers after having been criticized for years for inaction against corruption.

Abdul-Falah al-Sudani, who resigned this month after allegations of massive corruption in the Trade Ministry, was taken into custody after his commercial flight returned to Baghdad International Airport.

Officials rushed an arrest warrant to the airport as soon as they learned that al-Sudani had boarded a plane for Dubai in the UAE. The warrant was served as soon as the plane returned, according to Rahim al-Ogaili, chairman of the government's Commission on Public Integrity.

Al-Sudani, a member of al-Maliki's Dawa party, became the highest profile figure arrested so far in an anti-corruption drive launched this year.

Last Wednesday, al-Ogaili told parliament that 997 arrest warrants have been issued this year against officials suspected of corruption, including 51 in senior posts.

Only about a third of the warrants have been served because many of those sought have fled the country.

In recent weeks, however, the spotlight has fallen on the Trade Ministry because of its role in managing a massive $5 billion program to provide monthly food rations for all Iraqis.

The program has been in effect since Iraq was under international sanctions following Saddam Hussein's invasion of Kuwait in 1990.

Al-Sudani is accused of mismanaging the ministry by importing expired foods, engaging in illegal contracts and employing relatives, al-Ogaili said.

His two brothers, who worked for the Trade Ministry's security force, are accused of skimming millions of dollars in kickbacks on food imports. One of them is in custody after attempting to flee the country while the other is still at large.

The case became a national scandal after a video was posted on YouTube purportedly showing al-Sudani's two brothers drinking and partying with scantily clad women. Al-Sudani has acknowledged corruption within the ministry but has denied any role. 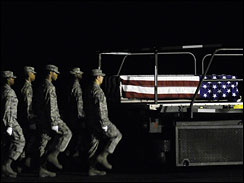 (AP Photo/Steve Ruark)
(Left: An Army carry team marches toward a transfer case containing the remains of Spc. Chad A. Edmundson Friday, May 29, 2009 at Dover Air Force Base, Del. Edmundson, of Williamsburg, Pa., was killed Wednesday by an improvised explosive device in Baghdad. As of Friday, at least 4,304 members of the U.S. military had died in the Iraq war, according to an Associated Press count.)

U.S. officials have long complained that corruption was siphoning billions of dollars away from Iraq's struggling economy.

Former Electricity Minister Ayham al-Samarraie was jailed in a corruption investigation but escaped in December 2006 and fled to the United States, where he also holds citizenship.

Former Defense Minister Hazem al-Shaalan left Iraq in 2005 and refused to return to face charges of $1 billion in fraud in connection with weapons sales under the government of former Prime Minister Ayad Allawi.

In October 2007, the former head of the public integrity commission, Radhi al-Radhi, told a U.S. House panel that corruption had cost Iraq some $18 billion over the past three years and that oil revenues were helping to finance Shiite militias.

However, public pressure is now rising on the government to combat corruption now that armed insurgent groups no longer pose a grave threat to the nation.

"After the decrease in violence, the government now has no excuse not to pursue and try corrupt people," said Abdul-Zahra Yacoub, a 49-year-old merchant in Najaf. "Corruption is a grave phenomenon that has weakened the country."

Mohammed Hassan, 35, a Shiite who works at the Oil Ministry, said corruption was growing even as violence declines and "what has been revealed so far is only the top of the iceberg."

"With the current levels of corruption and embezzlement, I think that Iraq is heading to a total disaster," he said.

Dozens of Iraqi political leaders have been accused of corruption and links to violent groups, with some fleeing the country to neighboring Jordan and Syria, while others have managed to keep the suspicions from turning into formal charges.

In February, Sunni lawmaker Mohammed al-Dayni was charged with being an insurgent ringleader and ordering a wave of attacks that included a 2007 suicide blast in the parliament cafeteria and mortar strikes on Baghdad's Green Zone.

Al-Dayni tried to flee the country on a flight to Jordan, only to have the plane turned back.

He slipped through Iraqi custody, though, after arriving in Baghdad and disappeared. He is believed to be in Syria where he recently appeared on a cooking show.
By Associated Press Writer Robert H. Reid; AP Writers Sameer N. Yacoub and Chelsea J. Carter contributed to this report