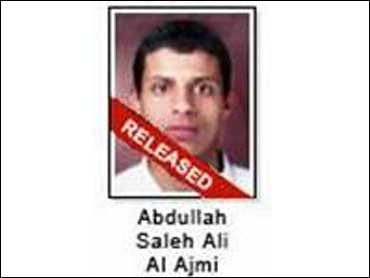 A Kuwaiti who had been imprisoned in Guantanamo for more than 3 1/2 years carried out a recent suicide attack in Iraq, the U.S. military said Wednesday.

It appears to be the first time someone who was held at the prison at the U.S. base in Cuba has carried out a suicide attack, said a Pentagon spokesman, Navy Cmdr. Jeffrey Gordon.

Al-Ajmi, 29, was transferred in 2005 to Kuwait, where the government was supposed to ensure he would not pose a threat. In May 2006, a Kuwaiti court acquitted him and four other former Guantanamo prisoners of terrorism charges.

Dubai-based al-Arabiya television, citing a cousin of al-Ajmi, last week reported that he had carried out a suicide attack, but the U.S. military could not confirm it until Wednesday.

Rye said in an e-mail to The Associated Press that al-Ajmi's family has confirmed his death and that authorities determined he entered Iraq through Syria.

"It is unknown what motivated him to leave Kuwait and go to Iraq," Rye said. "His family members reportedly were shocked to hear he had conducted a suicide bombing."

Three suicide car bombers targeted Iraqi security forces, killing at least seven people and wounding 28 in the northern city of Mosul, local officials said. It was not yet known which involved al-Ajmi.

Military documents previously released to AP show that al-Ajmi was "constantly in trouble" while in Guantanamo and held in disciplinary blocks during his detention. He also allegedly told officials in August 2004 that "he now is a jihadist, an enemy combatant, and that he will kill as many Americans as he possibly can."

Tom Wilner, a lawyer who represented Kuwaiti prisoners at Guantanamo, said al-Ajmi had a broken arm during one of their meetings at the base in Cuba and that he alleged he had been injured by guards who interrupted him while he prayed.

Wilner called the alleged suicide attack a "tragedy" that could have been avoided with court hearings for prisoners held at Guananamo, where the U.S. now holds about 270 men.

"The lack of a process results in tragic mistakes on both sides," the lawyer said.

American officials have said in the past that more than a dozen former Guantanamo prisoners engaged in hostilities against U.S. forces or its allies, an assertion that critics have challenged.