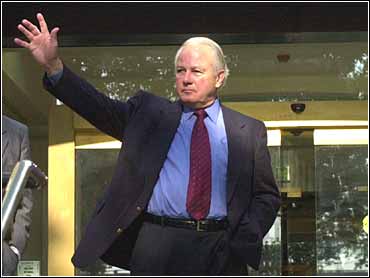 The four-term governor, who had reveled in past victories over prosecutors, was convicted Tuesday of extorting hundreds of thousands of dollars from businessmen applying for riverboat casino licenses during his last term in office.

The jury took fewer than three hours to decide on the amount of the forfeiture. U.S. District Judge Frank Polozola must now determine how the bill will be spread among the five defendants.

"At every turn, these defendants extracted - illegally extracted - money from these crimes," said prosecutor Todd Greenburg.

Dan Small, Edwards' attorney, appealed for leniency, saying that although the defendants were convicted of extortion, that does not mean they received any money from any of the witnesses in the case.

"All we ask now is that you go back and walk through this final task on each item and decide which of these specific pieces of money has the government proven beyond a reasonable doubt," he said.

CBS News Legal Consultant Andrew Cohen said Edwards will have to hope for an appeal, "because the federal judge won't be lenient. Federal judges are bound by guidelines, and if 300 years is the maximum sentence," then the former governor "probably won't get much less than that."

Also charged in the case were cattle auctioneer Cecil Brown, former gubernatorial aide Andrew Martin, businessman Bobby Johnson, state Sen. Greg Tarver, and state gaming commission board member Ecotry Fuller. Edwards and the others were accused in a series of extortion schemes to manipulate the licensing of Louisiana riverboat casinos from 1991 through 1997.

Edwards remains under a gag order and limited his comments outside court after the verdict. He said he faces a long prison term and did not want to be held in contempt.

After the jury's ruling Tuesday, Edwards said, "I regret that it ended this way, but that is the system. I have lived 72 years in the system and I will live the rest of my life in the system."

Edwards ended his comments by quoting a Chinese saying, "If you sit by a river long enough, the dead bodies of your enemies will float by you. I suppose the feds sat by the river long enough and here comes my body."

Asked whether he regretted not accepting a plea bargain, offered by federal prosecutors prior to the trial, Edwards, surrounded by his sobbing wife and children, said he had no regrets.

"I would have had to lie about my friends and I wouldn't have done that," he said.

Edwards is hoping to stay free while he appeals his convictions.