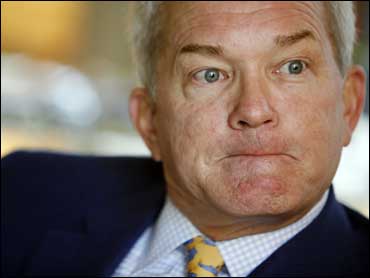 (AP PHOTO)
Do you want to know what's inside the mind of former Republican Rep. Mark Foley? That is the premise of a new radio show that will be hosted by the former Florida congressman, who resigned in 2006 after it was revealed he was sending sexually suggestive Internet messages to male, teenage congressional pages.

Foley recently taped his first episode of his new show, "Inside the Mind of Mark Foley," which will air on Sept. 22 on the North Palm Beach, Fla. radio station WSVU, the Associated Press reports. In the first episode, Foley is interviewed by the WSVU station manager and discusses topics like the Securities and Exchange Commission and its role in the Bernie Madoff scandal. Eventually, the show will reportedly go live, take calls from listeners and feature guests.

The former congressman approached the station with the idea for the show, the AP reports, and will work for free and bring advertisers on board. Up until now, Foley has been working in real estate investment.

Though Foley resigned without facing any criminal charges for his lewd messages, WSVU producers still had to consider whether listeners would want to hear from him. WSVU describes itself as "an Adult Standards music station catering to an older audience that is concerned with the current healthcare issue."

"We weighed the informative aspect of it against everything else and determined that what he has to say is much more important," Joe Raineri, the show's producer, told the AP.