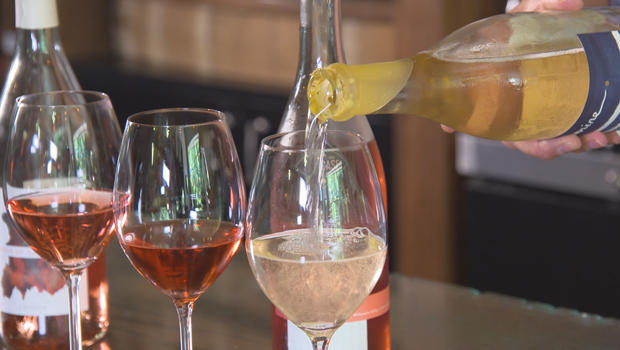 The verdant North Fork of New York's Long Island is a destination for wine lovers. What distinguishes Michael Croteaux's eponymous vineyard: it's the nation's only vineyard dedicated exclusively to rosé.

"Everybody has their own story about how they want their vineyard to go and what they want to do," said Croteaux. "And our story's pink.

It's become so popular that Croteaux sometimes runs dry of his exquisitely dry rosé weeks before summer's end.

"They would call that probably salmon or melon,"  Croteaux said of one sample. "Whereas this is almost like a pale peach kind of color."

But back in the '70's and '80s rosé was considered sweet swill -- not taken seriously at all.

The wine has a surprisingly rich history: "People think of rosé as a lesser wine or a cheap wine, when in fact for centuries the tsars of Russia, the popes, the kings of France, they all preferred rosé to red," said Cole. "Red was for the peasants."

In fact, according to Cole, 47% of all rosé consumers are male. "So I think there's something really beautiful about a guy just being really confident and saying, 'Hey, I drink pink wine. I'm proud, I'm proud to be a pink wine drinker!"

Brothers Tanner and David Oliver Cohen and comedian Josh Ostrovsky are the trio behind White Girl Rosé. "We're like the Magellans of Rosé, you know, constantly forging into New World's rosé," said Ostrovsky.

"Rosé is kind of like the cousin of ill-repute of wine," said Ostrovsky. "It's a little more fun. It takes itself a little less seriously."

Their brand, White Girl, was inspired by the fictional online character they created: "Babe Walker," who tweets about her "white girl" problems:

"She's a girl that would love to drink rosé for a living," said Tanner Cohen.

Their rosé is not exactly high end (their Babe rosé wine comes in a can), and they're okay with that.

"People of an older generation are, like, 'Wine in a can?' But like, it tastes really good," said Ostrovsky.

"It does taste good," laughed Rocca. "What is the future of rosé?"

"Ostrovsky said, "Honestly, the rosé future is anything you can imagine. We're doing rosé kegs. The sky is the limit. Rosé is here to stay."

In fact, everything's coming up rosé.