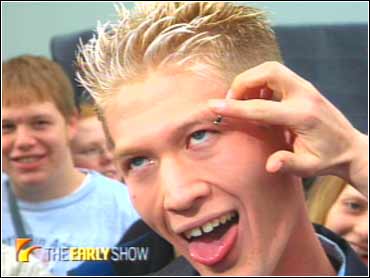 Six finalists vied for MTV's third annual Want to Be a VJ contest. Over the weekend, MTV viewers voted and a new VJ was crowned: Raymond Munns of Fort Collins, Colo., who scored 51 percent of the vote.

Munns explained to The Early Show Co-Anchor Jane Clayson on Monday what he thinks helped pushed him over the top. "I wasn't scared to spit out what everyone else wanted to say," says Munns, who according to MTV, is a laborer who enjoys hip-hop and is a "raver." His laugh is what he'd like to be recognized for.

His reasons for wanting to be a VJ?

"I want to get into movies and entertainment," he said last week. "The chicks would rock, too. Yeah, all right, I love chicks. I love famous chicks. I love hot chicks. I just want to be in that lifestyle."

He may have disappointed some fans by saying, "I'm dating a girl now so I'm not even trying" (to get a date in New York, that is).

He won $25,000 and a car. Plus he added, "I'm going to be moving to the beachhouse in California, and I'll be there all summer, filming, showing you guys what's going on."

MTV's Carson Daly explained to Correspondent John Roberts Thursday how the cable channel's third annual contest unfolded. From 3,000 people across the country, six finalists were chosen after competitions in three locations: San Francisco, St. Louis and Spencer, N.C. "We auditioned thousands of people," Daly said. They went in front of camera to talk about their musical passions, and MTV whittled it down to two in each area. Then on Saturday, after a VJ Olympics, the viewers voted.

"I totally identified with everything Ray said and did," wrote Roxy, who posted a message on MTV's bulletin board. "He is a real person and said what he thought. Not trying to score points with anybody. ... it's so awesome to finally see a real human being on mtv."

The other finalists were Jodi Rosenthal; Christopher Hart, Tavares Garrett, Lorelei Suarez and Shannon Wiseman, who was runner-up.

Rare items from Disney World and Disneyland sold at auction