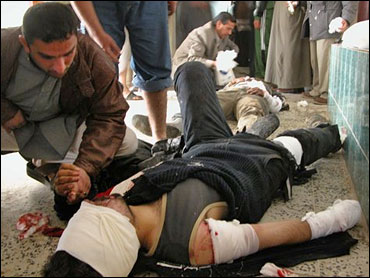 COLUMBUS, Ohio -- On a night when No. 13 Iowa wasn't in synch offensively, Ohio State set a new standard for futility with the ball.

Blame it on Iowa's defense or the Buckeyes' inefficiency and ineptitude on offense, but Ohio State - playing in its 42nd and final year in St. John Arena - scored its fewest points ever in the building.

"To not get 50 is a headache," Ohio State coach Jim O'Brien said after his team's sixth straight loss. "To not put ourselves in position to score at least 60 points will make it that much harder to win games."

Not since 1949 had an Ohio State team scored fewer points at home.

Meanwhile, the Hawkeyes came in averaging 87 points a game, but had 21 turnovers and shot just 43 percent from the field.

But coach Tom Davis wasn't about to take a Big Ten road victory for granted.

"I'm happy with the win, given all the conditions," Davis said.

J.R. Koch added 11 points, while Ryan Bowen had 11 rebounds and Darryl Moore 10 as the Hawkeyes outrebounded the Buckeyes 36-30.

It was the Hawkeyes' eighth straight win over Ohio State - their longest winning streak in the 122-game series.

"We did a good job," Oliver said. ``We took care of the ball after a shaky start and then took control of the ball game."

Ohio State's Michael Redd, the nation's leading freshman scorer at 22.1 points a game, hit just one of his first 11 shots and finished with 13 points on 3-for-15 shooting. Despite twisting an ankle in practice Monday night, Redd never left the court.

"We played man-to-man the first half and then played zone after that," Davis said. "It's tough for one man to stop him."

O'Brien said it's never easy putting the offensive burden on a first-year player.

"We can't expect that guy getting in the 20s for us every single time," O'Brien said.

Ohio State shot just 35 percent (17-of-48) for the game and had 24 turnovers, 10 by captain Neshaun Coleman in his first start of the season.

Ohio State never got closer than eight points in the second half, although Iowa didn't get untracked offensively against the Buckeyes' zone defense.

The first half was marked by dramatic runs for each team.

After Ohio State opened the scoring on a 3-pointer by Coleman, Iowa ran off the next 13 points as the Buckeyes missed 10 straight shots. But Ohio State scored 12 of the next 16 points to get back in the game, with two free throws by Redd pulling the Buckeyes even at 17.

Koch and Moore each scored four points in the closing 15-7 spurt that gave the Hawkeyes a 32-24 lead despite 12 turnovers.

The victory was Iowa's furth in a row at St. John Arena, which will be replaced next year by Value City Arena as Ohio State's home court.