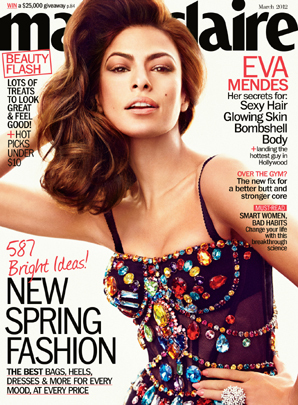 (CBS) Eva Mendes has thus far kept mum on her beau, Ryan Gosling, but the actress did dish -- just a little bit - in the March issue of Marie Claire.

They star in the upcoming film, "The Place Beyond the Pines," and were first spotted together in September, sparking the intitial reports of a romance.

Although she didn't address the romantic side of that relationship, Mendes did admit to having "girl crushes" on her idols, actresses Julianne Moore and Annette Bening.

"I'd kill to have half the careers they've had after 40," she said.

Mendes also opened up about body image, noting, "It doesn't matter what you have or what you look like. It's something everyone has to work at. I realize I have contributed to a certain happy, healthy, empowered image, but that's not all of me. I feel it's important to let women know that I have similar struggles."