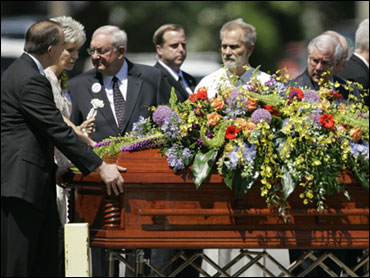 Tiller, one of the nation's few providers of late-term abortions, was killed by a gunshot last Sunday in the foyer of his own church, Reformation Lutheran, while he was serving as an usher and his wife was singing in the choir. His family had the funeral at the Methodist church to accommodate the large number of mourners.

His son, Maury, said the manner of his father's death resulted in an unimaginable outpouring of love and support for the family.

But he added: "I struggle with the manner he was welcomed into heaven."

Others recalled personal quirks that made him human.

Tiller's daughter, Rebecca, recalled how her father loved "Star Trek," and gave her a framed poster of Trekkie sayings for her apartment, which he promised her would bring her success if she read them each day before going out. Among his favorites were: "Live long and prosper," and, "When you go out to the universe remember, boldly go where no man has gone before."

He also was remembered for his generosity and sense of humor.

"Dear God, get heaven ready, because Mr. Enthusiasm is coming," said Larry Borcherding, of Overland Park, who first met Tiller a half-century ago when both were students at the University of Kansas. "Heaven will never be the same. It will be a better, better place with George in it."

About 700 people filled the church sanctuary and some 200 others watched a closed-circuit television broadcast in another room.

A large portrait of Tiller hung at the front of the sanctuary, and nearby was a wreath of flowers with the words "TRUST WOMEN." Some mourners wore buttons that said "Attitude is Everything."

Tiller's clinic in Wichita was among a few in the U.S. performing third-trimester abortions, and that made it a target of regular protests. Most were peaceful, but his clinic was bombed in 1986, and he was shot in both arms in 1993.

Borcherding recalled that immediately after that 1993 shooting, Tiller kept in close contact with him because Borcherding had lost his job.

"Who had a more boisterous, heartfelt laugh than George Tiller?" Borcherding said. "There are so many stories. I have many, many, many. Let's be sure to share them later."

Scott Roeder, a 51-year-old abortion opponent, was arrested a few hours after the shooting just outside Kansas City. He was charged two days later with the attack at the church, where he had occasionally attended services two months earlier.

About 30 abortion rights supporters lined a sidewalk outside the church Sunday, each holding a white carnation and one with a sign declaring Tiller, his family and his staff as "civil rights heroes." Many wore green or blue T-shirts commemorating Tiller's life, with the National Organization for Women's logo. 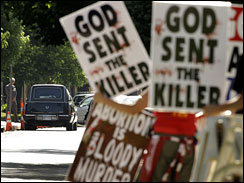 (AP Photo/Charlie Riedel)
Most anti-abortion groups avoided the funeral, having denounced Tiller's shooting. But 17 demonstrators showed up from Westboro Baptist Church, known for picketing soldiers' funerals to present its message that their deaths are God's punishment for Americans' tolerance of homosexuality.

They held signs such as "God sent the shooter" and "Abortion is bloody murder."

Police kept them about 500 feet away from the church, mostly out of sight of people arriving for the funeral, although their shouts and singing could be heard from blocks away.

The Westboro Baptist demonstration drew about a dozen counter-demonstrators, and the two groups shouted insults at each other before the service and tried to drown each other out with singing.

"This has nothing to do with abortion," said Mark Voyles, an Army veteran from Derby who said he was upset about Westboro Baptist's attacks on soldiers.

The service also drew 50 motorcyclists from the American Legion Riders, who honored Tiller's service in the Navy. Their leader, Cregg Hansen, also from Derby, said Tiller's family asked them to be there.

"We don't get involved in politics," Hansen said. "We're here 120 percent for the veterans."