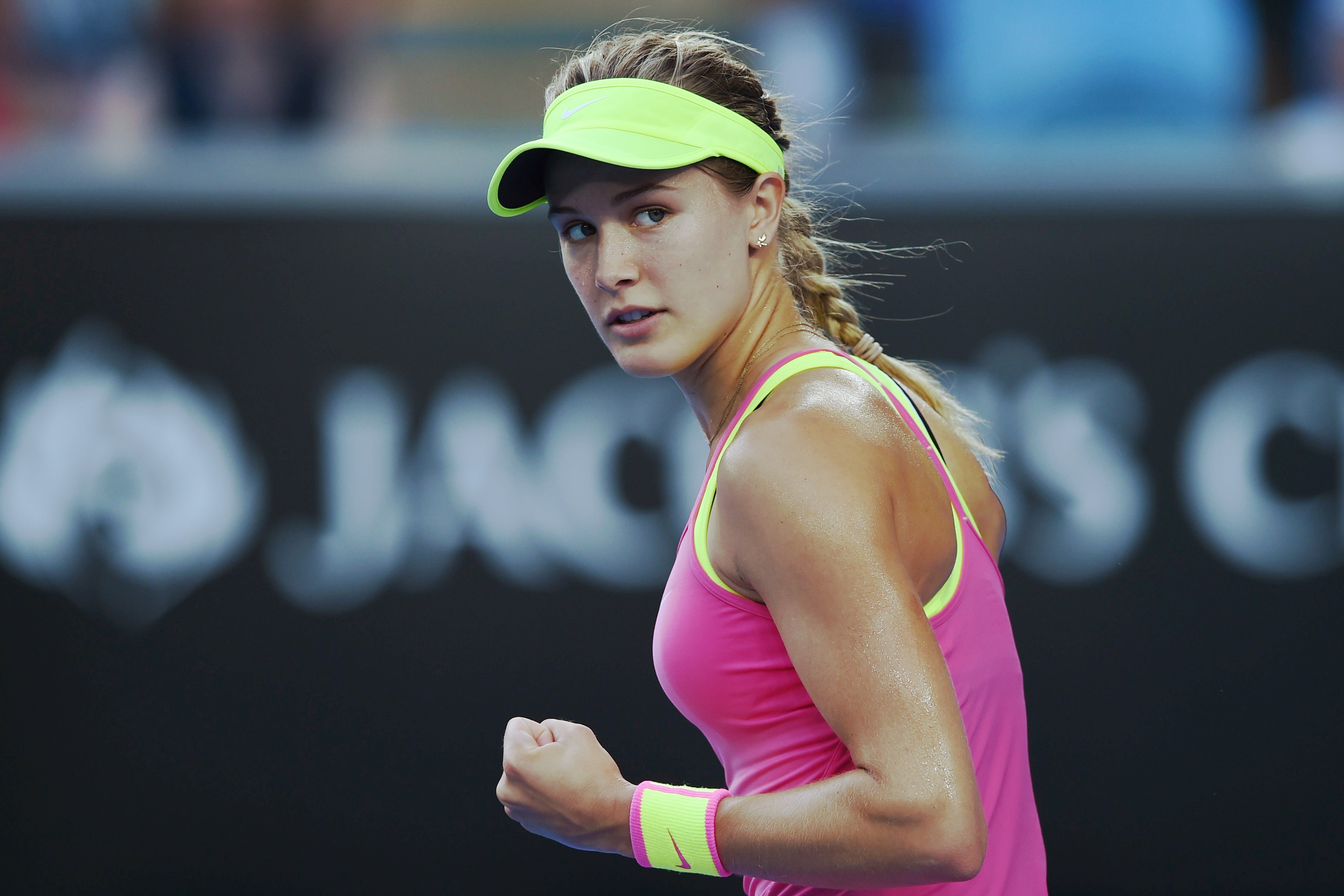 MELBOURNE, Australia -- Eugenie Bouchard - the unwitting protagonist of an Australian Open saga that has been dubbed "Twirlgate" - would prefer if people just focused on her tennis.

For the record, Bouchard said Friday she was "not offended" by the male interviewer who asked her to twirl for the crowd earlier in the week.

"I think it was just kind of funny," the Wimbledon runner-up said after advancing to the fourth round in Melbourne. "I'm fine with being asked to twirl if they ask the guys to flex their muscles."

This is not the first time the Australian Open has offered up a headline-grabbing sideshow that has nothing to do with tennis.

In previous years, two-time champion Victoria Azarenka's former boyfriend, the rap star Redfoo who was a regular front-row fixture, got as much press as she did. In 2011, former No. 1 Caroline Wozniacki told a colorful tale about getting into a fight with a kangaroo and showed a scratch to prove it. She later retracted the story, saying she had bumped into a treadmill but wanted to spice up a dull news conference.

This year, the season's opening Grand Slam tournament has Twirlgate, a term being used by Australian media and as a hashtag on Twitter.

It started Wednesday when Bouchard, one of the rising stars of women's tennis, was asked by a male interviewer to "give us a twirl" and show off her tennis dress after winning her second-round match. Noticeably embarrassed, Bouchard complied with a laugh and later said, "it was very unexpected."

Social media erupted with chatter. Some called it sexist, some questioned whether a male player would be asked to twirl after winning a match, and some dismissed the debate, saying they didn't feel sorry for a highly-paid athlete being asked to twirl.

Billie Jean King added to the chorus of criticism.

"This is truly sexist," tweeted King, an 11-time Grand Slam winner and a longtime campaigner for equal rights in tennis. "Let's focus on competition and accomplishments of both genders, and not our looks."

Serena Williams, who was also asked to "twirl" in an earlier round, said to reporters "A commentator asked me to twirl. I wouldn't ask Rafa (Nadal) or Roger (Federer) to twirl. Whether it's sexist or not, I don't know. I can't answer that."

Williams added "I don't think and look that deep into it. Life is far too short to focus on that. We have so many other problems we want to deal with that we should focus on. Whether I twirl or not, it's not the end of the world."

The 20-year-old Bouchard, a 5 foot-10 photogenic blonde, has become one of tennis' newest cover girls. She won the Wimbledon juniors' title in 2012 and has made rapid progress ever since. She reached the semifinals at last year's Australian and French Opens followed by the Wimbledon final which ushered her into the No. 7-ranking - the highest ever for a Canadian player.

Bouchard won her third-round match Friday, beating Caroline Garcia of France 7-5, 6-0. After a few questions on tennis, her post-match news conference turned to the twirl.

"I was waiting for this one," Bouchard said, smiling.

Players typically say that during big tournaments they try to stay away from newspapers and limit their time on social media to keep their minds on the game. But Bouchard said she was aware that the incident had caused a stir.

"My friends are texting me, saying I dance and twirl well and stuff, as jokes," she said. "It's just funny how it's taken a life of its own. I'm just going to try to focus on my tennis."

She raised her eyebrows when asked if this was a deja vu of an embarrassing question she faced last year, when an on-court interviewer asked her which celebrity she'd most like to date.

"You mean the Bieber question?" she said. Her answer at the time had been fellow Canadian Justin Bieber. "I don't know. They try to ask funny questions. It's entertaining, I guess. I don't mind it."

But she added that it would be nice to move on.

"I'm happy that I've played three solid matches here," Bouchard said, "and we could definitely be a little bit more focused on that."