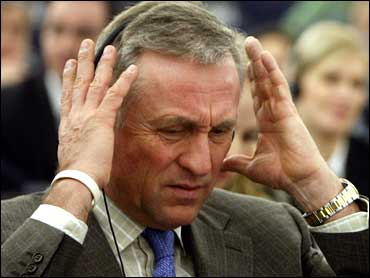 The current head of the European Union presidency on Wednesday warned that the U.S. economic rescue plans were, "a way to hell."

"The U.S. Treasury Secretary, talks about permanent action and we, at our spring council, were quite alarmed by that. He talks about an extensive U.S. stimulus campaign. All of these steps, their combination and their permanency is a way to hell.

"We need to read history books and revisit the lessons taught by history," Topolanek said, taking the E.U. presidency on a collision course with Washington over the economic options to solve the world economic crisis.

The prime minister made the comments as he briefed parliament on the outcome of the EU's recent summit in Horsham, England. His comments came after British Prime Minister Gordon Brown called for more trans-Atlantic cooperation, lauding Mr. Obama for his willingness to cooperate.

At the EU summit in southern England, many EU nations expressed support for regulation, instead of further bailout efforts.

Topolanek was speaking one day after he offered the resignation of his government, after it lost a parliamentary no-confidence vote over its handling of the economic crisis.

It was a huge embarrassment for Topolanek, coming just days before a planned visit by President Obama and midway through the Czech Republic's six-month EU presidency.

It was the first time a government has been ousted by parliament since the country came into existence after the 1993 split of Czechoslovakia.

The government has struggled to resolve deep divisions within Parliament over whether to allow components of a U.S. missile defense shield on Czech territory, and whether to adopt the EU reform treaty to streamline decision-making in the bloc.

In recent months, opposition lawmakers also said they became frustrated with the government's response to the global economic slowdown. Before the crisis, the Czech Republic's export-oriented economy had been growing fast, but the country is expected to enter a recession this year.

The opposition said the government acted too late and did too little - approving a stimulus package only last month worth 70 billion koruna ($3.5 billion), including measures for investments in ecology and infrastructure along with tax cuts and loan guarantees.

"The government got what it deserved," said former Prime Minister Jiri Paroubek, who leads the opposition Social Democratic party. "It was not able to handle the affects of the economic crisis."