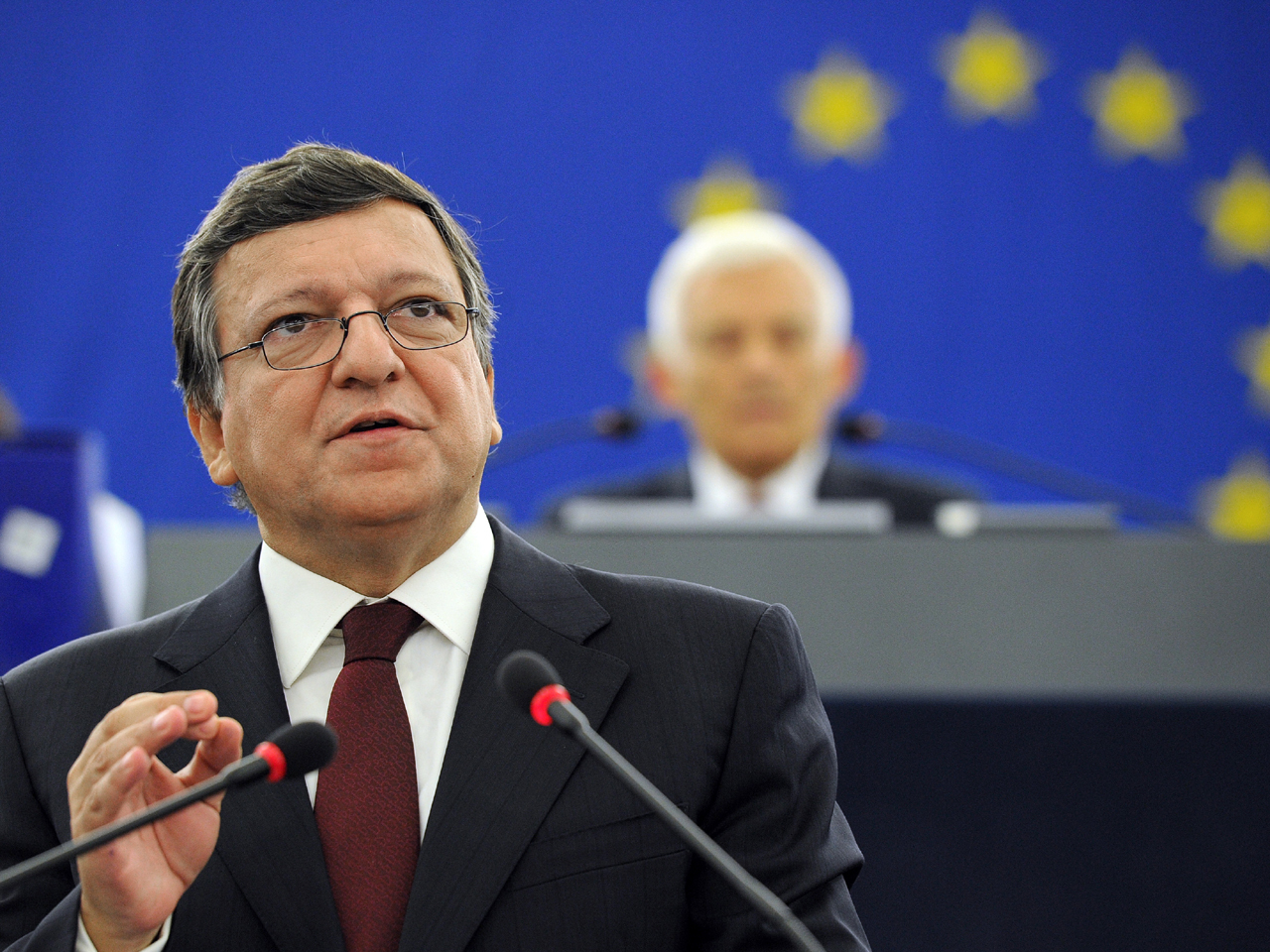 BRUSSELS - The head of the European Union's executive arm urged Europe to get more united as it grapples to contain a debt crisis in Greece that's threatening the survival of the euro currency itself.

In a state of the union speech at the European Parliament in Strasbourg, France, Jose Barroso, who heads the European Commission, came down firmly in favor of the 27-nation EU having a stronger central government.

"If we do not move forward with more unification, we will suffer more fragmentation," he said Wednesday.

"I think this is going to be a baptism of fire for a whole generation," Barroso added.

Barroso's comments came as lawmakers in Finland and Germany prepare to vote on measures that will give the 17 countries that use the euro more powers to fight a debt crisis that's already led to Greece, Ireland and Portugal to seek bailouts. Greece is lumbered with so much debt that many in the markets think it will have no option but to default.

As well as facing a crisis in the eurozone, the wider EU is dealing with problems afflicting its borderless travel area that many observers say call for stronger central management of the union. More integration though would mean that member countries would lose some powers they have considered part of national sovereignty.

Barroso asserted that the EU would be able to summon the political will to come up with overall solutions to its crises and proposed a tax on financial transactions, which he said could raise euro55 billion ($74.7 billion) a year.

Also Wednesday, the head of the European Central Bank told an Italian newspaper that governments should speed up their implementation of measures to fight the continent's debt crisis.

Trichet called on leaders "to demonstrate their sense of direction" and quickly put the new steps into effect.

Trichet said in an interview to be published later that "now is the time for effective action, implementation, verbal discipline and a stronger team spirit."

Lawmakers vote Wednesday in Finland and on Thursday in Germany on giving the eurozone bailout fund the ability to buy government bonds, bail out banks, and lend to troubled governments quickly before they are in a full fledged crisis.

Those measures were agreed by eurozone leaders July 21, but the delay in implementing them has been one of the main reasons for the turmoil in financial markets over the past few weeks.

While waiting for approval of the July 21 agreements, the ECB has stepped in to buy government bonds and drive down borrowing costs for Italy and Spain.

Fears the eurozone's third and fourth largest economy may get sucked into Europe's debt crisis had stoked fears they would lose access to market funding and be forced into requesting bailouts, like Greece, Ireland and Portugal already have.

The ECB launched the purchases only reluctantly, and Trichet indicated he expected the bailout fund — the European Financial Stability Facility — to be in a position to take them over.

Still, the euro440 billion available from the EFSF has not reassured markets; so far European leaders have resisted suggestions to increase its size.

Markets have also watched nervously as eurozone authorities pushed Greece to make more cutbacks to qualify for an installment of bailout money that is needed to keep the country from defaulting.

A default by Greek or another government would send shock waves through the global economy, particularly in Europe, authorities fear. Banks would suffer such large losses on government bonds they hold that they would cut off credit to the wider economy and cause a recession.