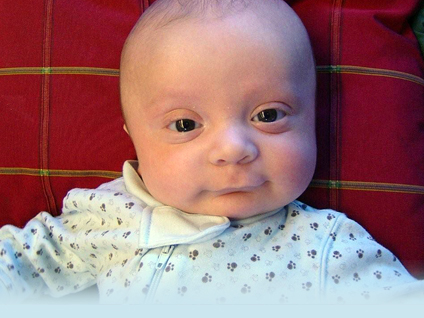 MURRIETA, Calif., - Should newborns be tested for a disease if there's no proven treatment for it? In this case, it's a life-threatening disease, and the only treatment is expensive, risky and uncertain.

CNN's Dr. Sanjay Gupta, a CBS News contributor, tells us why some parents say they have a right and a need to know.

After years of struggling to have a family, Steve and Nicole Aldrian were overjoyed to have healthy twin boys, Tyler and Trevor.

"They were healthy, happy," Steve said. "My dad made special trips just to hold the boys."

But by four months, Trevor was vomiting, fuss and stiff. By six months, he was diagnosed with a rare genetic disease called Krabbe. Krabbe babies lack an enzyme needed to protect their nerves.

It's so painful, Trevor cried for 15 hours a day.

"My child's dying and I'm angry everyday," Nicole said. She's angry because she believes Trevor could have been treated and received a test that costs less than one dollar. Yet only New York screens all babies for it.

"He would have had a chance at life," Nicole said. "He doesn't now."

If Krabbe is detected before any symptoms appear, an experimental transplant using stems cells from umbilical cord blood can stop or slow the disease in some cases.

In 2009, a government panel considered adding Krabbe to the panel of 30 inherited diseases newborns are routinely screened for - but said there's 'insufficient evidence' babies will benefit enough to justify the risk and expense of diagnosing and treating this disease. Stem cell transplants can cost hundreds of thousands of dollars, and cause fatal infections.

Now 11, Gina attends 5th grade. She can't walk, and uses a computer to talk. She swims and is a Girl Scout.

As for the Aldrian family, Tyler doesn't yet understand that his twin brother Trevor will be gone soon.

"I would take Trevor in a wheelchair any day of the week knowing that my child is still alive," Nicole said.

"If we lose Trevor to save the next child," Steve said, "it'll give us a little peace in our heart that we can do something now."

There are more states - Illinois, Missouri and New Mexico - that intend to begin testing for Krabbe. But the Aldrian family wants Trevor's legacy to be a screening program for every newborn.

Is this all about money?

Resources are certainly a part of it, but also the screening test can give false positive and subject babies to invasive procedures to confirm the diagnosis.

So the federal government's advisory panel is watching what happens in New York, where all babies are screened, to determine the cost/ benefit of recommending that all states adopt universal testing.

For more information about how to help the Aldrian family: Peaceloveandtreavor.com

Save Babies Through Screening Foundation