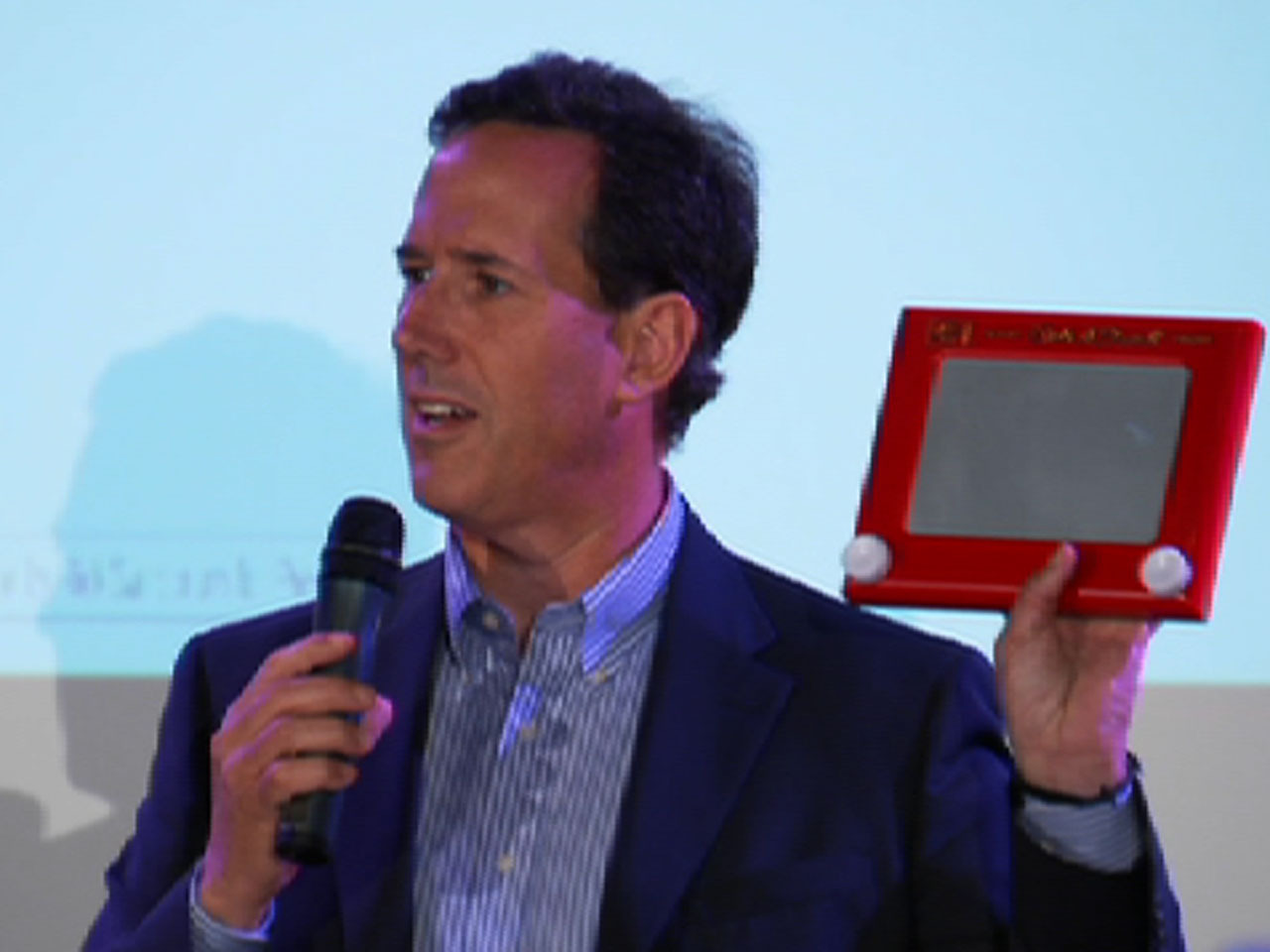 Rick Santorum has found an unlikely new rallying point: The Etch A Sketch.

Santorum's campaign has aggressively seized on a comment Wednesday morning by Romney Communications Director Eric Fehrnstrom, who was asked on CNN if he was concerned that the primary challenge from Santorum and Newt Gingrich "might force the governor to tack so far to the right" that Romney will alienate moderates who would otherwise vote for him if and when he reaches the general election.

"Well, I think you hit a reset button for the fall campaign," Fehrnstrom responded. "Everything changes. It's almost like an Etch A Sketch. You can kind of shake it up and restart all over again."

The comment reflected a political reality: Presidential candidates from both parties traditionally tend to play to their base in the primary before tacking toward the center in a general election in order to win moderates. But it also played directly into the Santorum campaign's argument that conservatives can't trust Romney to stand up for their beliefs in the general election.

In the middle of a campaign event in Louisiana Wednesday, Santorum, grasping an Etch A Sketch, said he was launching "what I'll call my Etch A Sketch tour of America." It was not the first time Santorum brought up Fehrnstrom's comment Wednesday.

"Imagine, had Mitt Romney been around at the time we were drafting our Constitution," he said. "He would just shake it and just shook it up after it was approved to rewrite it. We're talking about big things here folks, this isn't a joke or a game. We're talking about important things in our society. Freedom is not something that you go out and give nice lofty highbrow speeches about and then turn around the next day and say no, when we have to go out and work in a general election, I'll go back to my government control approach."

Added Santorum: "The people of Louisiana have a choice to make now that we know what's very clear about the Romney campaign. We all knew it before, as he was all over the place on every issue, but now they've made it clear. They think they have this nomination in the bag so it's time to reset. It's time to start moving to the middle. We have an opportunity here in Louisiana to make a very clear statement. We're not looking for someone who's the Etch A Sketch candidate. We're looking for someone who writes what they believe in in stone and stands true to what they say."

A Santorum adviser told CBS News/National Journal reporter Lindsey Boerma that the campaign had stopped at a Toys "R" Us store on the way to the event and picked up four Etch A Sketch toys - and that on the way to the event they were doing drawings of Romney in the car. (Santorum's campaign tweeted out a photo of Santorum using the toy with the caption "@RickSantorum studying up on @MittRomney policy positions.")

Meanwhile, Santorum spokeswoman Alice Stewart showed up at a Romney event in Maryland and handed out Etch A Sketches to reporters.

"The point is that clearly the Romney camp acknowledged what we've all been afraid of is that if he were to make it through the primary he would abandon his conservative principles and go right back to the middle," she said, pointing to Romney's relatively moderate record as Massachusetts governor. "That's absolutely the last thing that we need as conservatives."

The Santorum team isn't alone in mocking Romney over the comment. Newt Gingrich brought an Etch A Sketch to a campaign event, where he gave it to a toddler and said that with it, the child could be a presidential candidate too. He also tweeted that "Etch-A-Sketch is a great toy but a losing strategy. We need a nominee w/bold conservative solutions."

Democratic consultant Matt Ortega, meanwhile, went up with a website, etchasketchmittromney.com, featuring what are presented as Romney's contradictory statements on an Etch A Sketch screen. And on Twitter, Romney's critics asked what other toys might describe the former Massachusetts governor using the hashtag #RomneyToys. (A few samples: "Hungry, Hungry Corporations," "Backtrackgammon," "My Little Phony.")

The gaffe blunted a bit of positive news for Romney Wednesday: His endorsement from former Florida Gov. Jeb Bush. Romney responded to questions about the criticism late Wednesday afternoon by saying that his campaign "takes on a different profile," if he gets the nomination, but his positions won't change.

"I can tell you this: When the campaign moves to becoming a general election campaign, the nature of the campaign itself in terms of staff, funding, the states we would go to will be different than today, obviously," he said, adding that the campaign becomes "much larger" and involves working with the Republican National Committee.

Meanwhile, the company behind the Etch a Sketch, Ohio Art Company, says it is thrilled with all the attention. The company put out a statement in which it said that it is "Happy to see Etch A Sketch, an American classic toy, is DRAWING attention with political candidates as a cultural icon and important piece of our society."

It goes on: "A profound toy, highly recognized and loved by all, is now SHAKING up the national debate. Nothing is as quintessentially American as Etch A Sketch and a good old fashion political debate. We are pleased with the added attention being drawn to Etch A Sketch which is truly one of the most recognizable, iconic and fun toys ever developed. As one of the most classic toys of all time, Etch A Sketch has always sold particularly well with today's consumer. It is too early to tell, but we are hopeful to see if there is an uptake in sales given this recent exposure."

With reporting by Lindsey Boerma, Rebecca Kaplan and Caroline Horn.