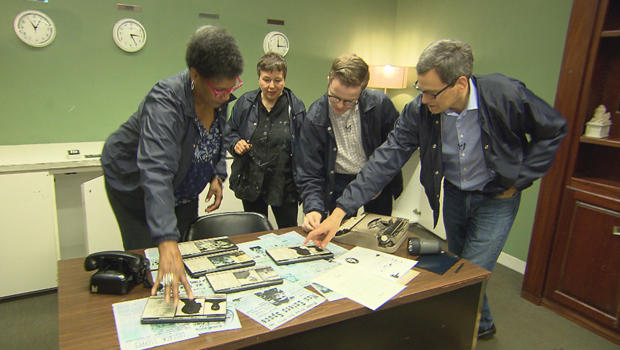 Ordinarily, it takes only one "Sunday Morning" correspondent to report a story. But today, we're working as a team: David Pogue, Martha Teichner and Nancy Giles, joined by "Sunday Morning" intern Cory Peeler.

They are locked in a "CIA office," and they only have one hour to escape before a "bomb" goes off. The clock is ticking … 2:58 left! And here's the crazy part: They paid to do this!

They are playing an escape room called Clue Chase in New York City. You pay 25 or 30 bucks, and you have one hour to hunt for clues and unravel a mystery. What's that ... a hidden doorway?

David and Lisa have played more than 700 escape rooms, out of the estimated 8,000 around the world. They write reviews at their website, roomescapeartist.com.

"An escape room is an immersive adventure for a group of people, your family, your friends, whomever you want to play with," said David. "Maybe you're stopping the missiles from launching, or you're in search of the holy grail."

Pogue asked, "Why would anyone want to be shut into a room for an hour?"

"It is bizarrely revolutionary, in 2019, to go and do something in real life with the people that you care about and to not have a screen in front of you," David said.

Lisa added, "And doing something tangible. You get to pick up things and manipulate them and see if you can figure out what it does or where to put it or what it might be used for. You're solving puzzles."

By the way, our "Sunday Morning" team is not actually locked in … and there's not an actual bomb. They're never alone, either; behind the scenes, a staff member is always watching and listening.

Escape rooms started in Japan in 2007. Since they began opening in the U.S. in 2012, they've been growing fast, and showing up on TV shows. There was even a hit horror movie about an escape room with no escape.

Escape rooms have also been getting more elaborate. If you want proof, check out 13th Gate, in Baton Rouge, Louisiana. It's like being inside a movie.

The elaborate puzzle included a shipwreck, built by the crew brought on by 13th Gate creator and owner Dwayne Sanburn. "They're just amazing, talented guys," he said. "A lot of them came out of the movie industry. It takes a year to build [a game]. A lot of work, a lot of research."

Pogue asked, "On a typical day, how many people come through?"

"In general, it's a profitable enterprise?"

"It's a tremendous amount of work. But it can certainly be profitable," Sanburn said.

But it's not an enterprise where you can have a lot of repeat customers. "That is probably the only downside to escape room, is that after you play it, there's no replayability, really," he said. "So, you have to continue building new games to keep audiences coming back."

It's hard to explain the rush you get from an escape room until you've played yourself. The danger feels real. Your heart races. And as for our crack team of "Sunday Morning" correspondents, well, they did not win. The time ran out … and the bomb went off.

But you know what? They didn't care. For one hour, they'd been working their wits, having fun with friends transported to a different time and place. Talk about escapism!