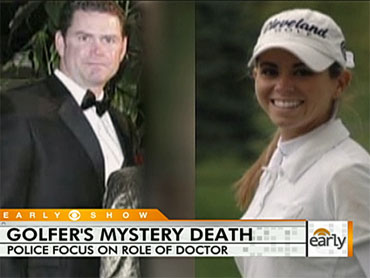 Police may be a step closer to finding the cause in the mysterious death of 25-year-old pro golfer Erica Blasberg. Newly released search warrants reveal that just four days after her death on May 9, investigators raided the medical offices and home of Dr. Thomas Hess.

"Early Show" National Correspondent Hattie Kauffman reported sources close to the investigation say Hess talked to Blasberg the night before her death. The next day, he visited her home, and was the one to call 911.

Formal federal prosecutor Laurie Levenson said, "Clearly at this point he is the focus of the investigation, we don't know exactly why, but they think he either knows or has something to do with her death."

Among the items seized from the doctor's properties: computers, video cameras, a cell phone, and white plastic trash bags, similar to one found near Blasberg's body. A prescription, written by Hess, was discovered in Blasberg's home.

Levenson said, "It may not matter whether he was her doctor or not. It just may be that he was the one who had access to the drugs or was helping her get access to them as well."

Blasberg, whose professional golf career started with fanfare and promise, struggled in the last two years, battling injury and depression. Her final tournament was in Mexico, and sources say there were prescription drugs from that country in her home.

As family and friends continue to mourn her loss, the coroner says a final cause of death could be weeks away.

As for Dr. Hess, Erica's father Mel Blasberg said on "The Early Show" he's not surprised a search warrant was issued.

He said, "The whole issue with Dr. Hess is -- it's been vague, ambiguous, almost, and as these events are coming out, I'm learning about them just like everybody else is."

Mel said the police have largely kept him in the dark about the case.

But did Hess and his daughter have a relationship?

Mel explained, "Well, that's the fascinating thing. I had seen Erica the Thursday before the Saturday that she died or Sunday that she died, and she was mentioning that she had a friend who was a doctor. But that was it. I didn't even know the guy's name. It wasn't until all these pieces of the puzzle came together, so-to-speak, that I knew who he was. There's no doubt Erica and this doctor had something other than a professional patient-doctor relationship. I'm not implying anything beyond the fact that I know for a fact that they played golf."

Mel said he doesn't know anything beyond what Erica told him about Hess, and any further information about an intimate or inappropriate relationship must come from police.

Mel said,"I don't know. Erica did not share that with me. And I should say that the question that I posed to the police department, and I think it's important for everybody to know this as well, is Erica was fine. Contrary to all this backup information, how bad she was a year ago, Erica was ready to play, came out of the Mexico event really pumped up. I saw her again on that Thursday, went out to Vegas with her, went Southern Highlands with her. You could just tell, she couldn't wait to get there. We know that she packed -- that was Thursday -- we know she packed a bag on Friday, late Friday, apparently she played golf on Friday. And there was -- it's a little bit of an event, because she had a brand-new bag and switched things over -- so she was ready to go. What happened to Erica after she did all this, for her not to go to Alabama, which is where the event is? That's a question that has to be answered. There's only thing I can think of and that's something off the (golf) course."

When "Early Show" co-anchor Maggie Rodriguez asked Mel about some of the rumors about his daughter's life, specifically that she was clinically depressed about her career, was in financial straits and may have committed suicide, Mel flatly denied them.

"The three things you said are all wrong," he said. "So, 'A,' she was not depressed. In a medical sense. She was never treated for it. Never went to a doctor for it. Financially, contrary to what everybody is saying, Erica's off-course income was substantial. Perhaps not as much as the PGA Tour guys. To say that Erica was upset about how she played the year before, that is a correct statement. But that was the year before. Erica was fine as she went in to this year. Although she had a tough route to follow, because she had to do some qualifying. So again part of your original question is, 'Why am I here? Why am I doing this?' It's to clarify things that are just wrong."

Mel said there is a lot of misinformation out there about his daughter. In fact, he thanked "The Early Show" for giving him an opportunity to share "some things (he'd) been suppressing for quite some time."

Mel said he's worried his daughter is turning into a sensational figure.

"I don't want anyone to lose sight of the fact there's a real human being here, there's people behind her. It's important that, as a father, I don't know if defend is the right word, but certainly I want people to know anything that I know short of creating a problem in the investigation about what's going on."