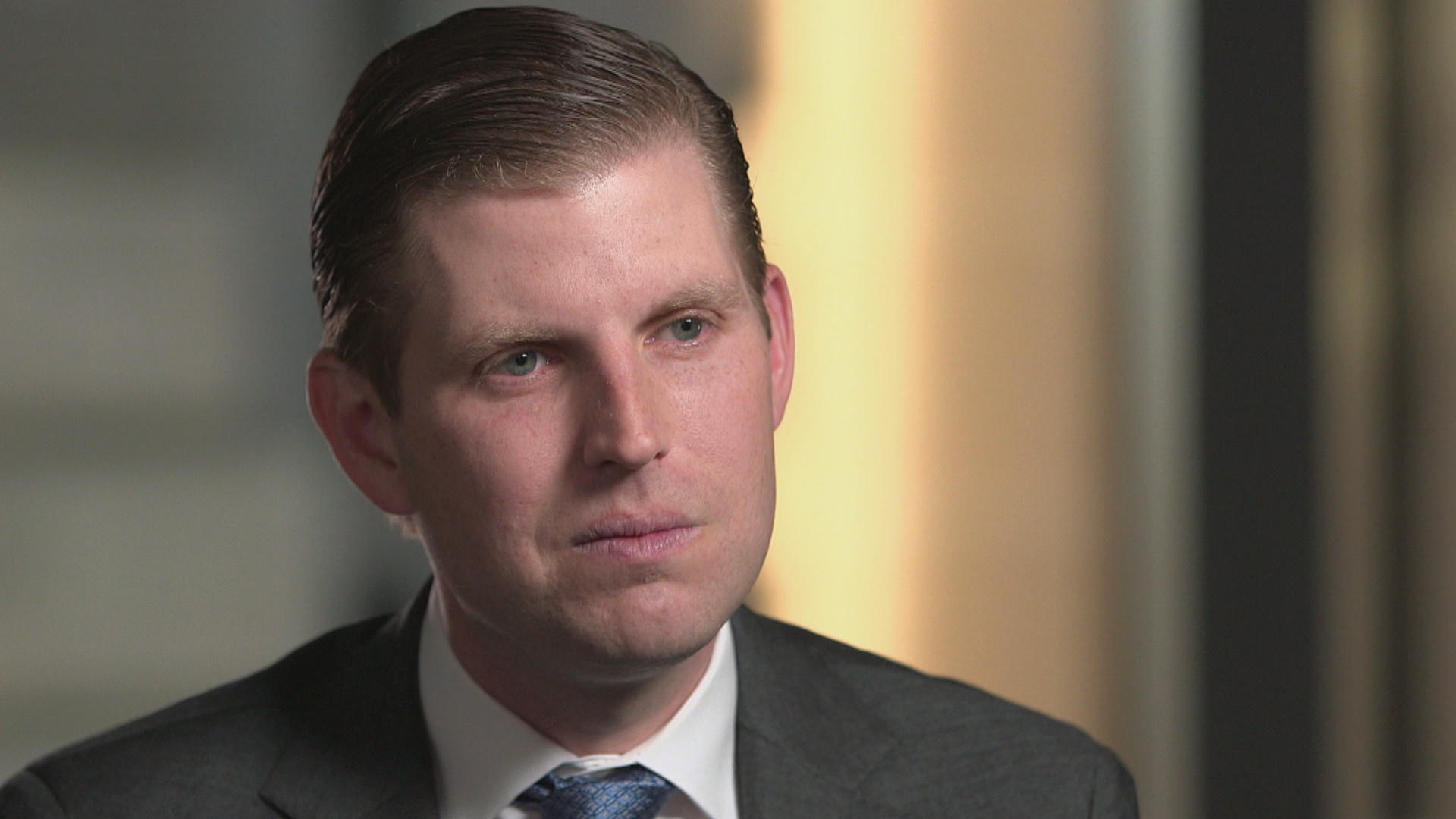 In an interview for the CBS News special, “Change and Challenge: The Inauguration of Donald Trump,” airing Friday at 8/7c, “CBS This Morning” co-host Gayle King asked the third-oldest Trump child about his biggest fear as his father takes the oath of office.

“I think having a lot of new people around him,” Eric Trump told King Thursday at New York’s Trump Tower. “And, you know, as a family, we’ve always been a little bit insular -- you know, it was my father, it was Don, Ivanka, you know, myself... the company. And we were very, very close. And I think that’s going to be an adjustment. But he has amazing people.”

“He’s taken some flack about his Cabinet choices. Not everybody thinks that they’re amazing. You understand that as well,” King said.

“Yeah… I do. And you’re -- listen, you’re always going to have that. But he’s picked incredibly, incredibly talented people. And my father -- his entire life, I’ve seen this --  he can pick talented people,” Trump said. “It’s what’s attributed to so much of his success. And I think he’s very much done that here.”

Eric Trump also expressed confidence in his bigger role -- taking over his father’s business empire with his brother Donald Jr.

“Are you feeling pressure about your new role too, Eric, because now you are going to be under a microscope that you have never seen before. Are you ready for that? Worried about that?” King asked.

“No I am ready for it. And we’re ready for it,” Trump said. “I take our role in the company incredibly seriously and we are going to do the right things.”

In his first post-election press conference on January 11, President-elect Trump introduced Sherri Dillon, the lawyer who has been working on the plan for his business empire. She said that Mr. Trump would  know about the Trump Organization’s new business dealings  only “if he reads it in the paper or sees it on TV.”

“But the Trump organization is his baby though, Eric,” King said. “How does he just turn that off? And for you, not to be able to pick up the phone and call him about advice?”

“Sure. Well, listen, he turns it off in that he has to have trust in us and we’re going to do a great job,” Trump said.

King also asked Eric Trump about his father’s Twitter activity, which he plans to continue as president.

“I know that you feel comfortable saying anything to him. Have you just said anything about the tweets?” King asked. “Surely there has been times, Eric, where you go, ‘Geez, dad, did you have to do that? Or why don’t you just ignore that?’”

“Yeah… I think so. I don’t think every family member always agrees with absolutely everything,” Trump said. “What I can tell you is my father’s Twitter is an incredible vehicle for him. I’ve seen firsthand throughout this whole process how dishonest the media has been. I am the biggest proponent of him communicating directly with the people, as opposed to the third parties who want to do anything to undermine him.”

“No, that’s certainly working for him. But I’m thinking about tweets where he trashes “Saturday Night Live” or ‘Alec Baldwin is this, or ‘Meryl Streep is overrated’ or John Lewis -- you know, those kinds of things that some people say seem petty. You say?” King asked.

“He’s a fighter. This country needs a fighter. You want somebody with that mentality in this country, in this world. You want somebody who will push back and fight for themselves but also fight for the interests of this nation,” Trump said. ”You know, my father is the first person in the office in the morning, he’s the last person to leave. He works seven days a week, 365 days a year. He’s going to put Washington back to work and our government’s going to start working for the people again.”

“So they did say he’s going to take the weekend off and then start on Monday?” King asked.