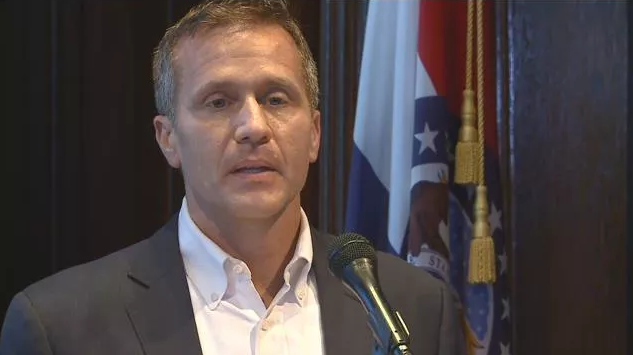 Gov. Greitens announced his resignation at a press conference Tuesday afternoon. Greitens, who faced possible impeachment over an extramarital affair and allegations of misuse of a charity donor list for political purpose, said he will resign effective this Friday at 5 p.m. local time.

The 44-year-old's brief press conference addressed the investigations and the toll it has taken on him, his family and friends.

"I came to office to fight for the people of Missouri ... I am thankful to all those who have worked beside me, who sweated beside me, those who gave their time, their energy and their precious resources, so that we could pursue our mission of taking Missouri in a new and better direction," he said. "The last few months have been incredibly difficult for me, for my family, for my team, for my friends and for many, many people ... This ordeal has been designed to cause an incredible amount of strain on my family ... endless personal attacks designed to cause maximum damage to family and friends."

"We must -- as we have always done -- work to improve the lives around us ... I will always be a fighter for the people of Missouri. The time has come to tend to those who have been wounded, and to care for those who need us most," Greitens said emotionally.

Even while resigning, he remained defiant.

"I am not perfect. But I have not broken any laws or committed any offense worthy of this treatment," Greitens said. "I will let the fairness of this process be judged by history."

Greitens didn't take any questions from reporters after his brief statement. He took the oath as Missouri's chief executive nearly 17 months ago with a pledge to root out "corrupt career politicians."

He was involved in an affair with his former hairdresser. He had been considered a rising star in the Republican Party and spent nearly six months fighting to stay in officer after that affair became public in January during a TV news report that aired immediately following his State of the State address. The probes into his conduct by prosecutors and lawmakers began with allegations stemming from the affair and expanded to include questions about whether he violated campaign-finance laws.

Republican leaders in the Missouri House say GOP Gov. Eric Greitens has "put the best interest" of the state's residents first in deciding to resign.

They said as public servants, their duty is to put the best interests of the people first and, "The Governor's decision today honors that duty and allows Missouri to move forward."

The three leaders also pledged to help ensure a smooth transition to power for Lt. Gov. Mike Parson as he takes over for Greitens.

They also thanked members of a special House investigatory committee and said for their "serious and professional" manner.

Hawley, like Greitens a Republican, said in a brief statement that he wished Parson well as he prepares to make the transition to governor. Hawley says he stands ready to assist in the transition. Hawley is running to unseat Democratic Sen. Claire McCaskill.

A former Missouri governor says the state's next chief executive "will be worthy of this new responsibility."

Blunt said Parson will be dedicated to working with the Republican-controlled Legislature to move the state forward. Greitens has had a sometimes rocky relationship with lawmakers. Blunt also noted that Parson is a former county sheriff and called Parson a "law and order leader." Blunt served one term as Missouri's governor, from 2005 to 2009.

U.S. Sen. Roy Blunt says Missouri Gov. Eric Greitens' resignation was "the best decision for his family and the state."

The Republican senator also said Tuesday that he looks forward to working with Parson and "will do everything I can to be helpful." Blunt previously resisted calling for Greitens' resignation, saying legal and legislative processes should run their course.

Parson, who will serve the remainder of Greitens' term through January 2020, pledged to carry out his new duties "with honor and integrity." He said Greitens' resignation "will allow our state to heal and move forward from what has been a difficult time."

A St. Louis grand jury indicted Greitens on Feb. 22 on one felony count of invasion of privacy for allegedly taking a photo of a woman without her consent at his home in 2015, before he was elected governor. The charge was dismissed during jury selection, but a special prosecutor was considering whether to refile charges.

In April, the local St. Louis prosecutor's office charged Greitens with another felony, alleging that he improperly used the donor list for a charity that he'd founded to raise money for his 2016 campaign.

Less than two weeks ago, the Missouri Legislature began meeting in special session to consider whether to pursue impeachment proceedings to try to oust Greitens from office.

A special House investigatory committee had subpoenaed Greitens to testify next Monday.

The governor's brashness had alienated some GOP legislators even before his affair became public. Senate Leadership Fund President Steven Law said the resignation could help unify Missouri Republicans and free up money.

In January, the woman's ex-husband released a secretly recorded conversation from 2015 in which she described the affair, which happened shortly after Greitens created an exploratory committee to run for office. The woman later told the House committee that Greitens restrained, slapped, shoved and threatened her during a series of sexual encounters that at times left her crying and afraid.

Greitens said the allegations amounted to a "political witch hunt," and vowed to stay in office. But the report's release created a firestorm, with both Republicans and Democrats calling for his resignation.

Greitens' administration was thrown into chaos the night of Jan. 10, when a St. Louis TV station aired a report about Greitens allegedly taking the compromising photo and threatening to blackmail the woman if she ever spoke of their encounter. The report aired shortly after Greitens delivered his State of the State address to lawmakers.

Greitens admitted to having an affair but denied any criminal wrongdoing. He said the criminal case was politically motivated and called St. Louis Circuit Attorney Kim Gardner, a Democrat, a "reckless liberal prosecutor."

Lawmakers from both parties immediately began questioning whether Greitens could continue to lead the state in the wake of the scandal. The House authorized the legislative investigation a week after the indictment.

The Associated Press first reported in October 2016 that Greitens' campaign had obtained a list of individuals, corporations and other nonprofits that had given at least $1,000 to The Mission Continues. The AP reported that Greitens raised about $2 million from those who had previously given significant amounts to the charity.

Hawley, a Republican running for U.S. Senate, turned evidence over to Gardner, saying April 17 that he believed Greitens had broken the law. Her office charged him with tampering with computer data for allegedly disclosing the donor list without the charity's permission.

A May 2 report from a special House investigatory committee indicated that Greitens himself received the donor list and later directed aides to work off it to raise money for his gubernatorial campaign. A former campaign aide testified that he was duped into taking the fall when the campaign tried to explain how it had gotten the list.

The invasion-of-privacy indictment stated that on March 21, 2015, Greitens photographed the woman and transmitted the photo "in a manner that allowed access to that image via a computer."

During her testimony to the House investigative committee, the woman said Greitens invited her to his home and offered to show her "how to do a proper pull-up." The woman said she initially thought "this is going to be some sort of sexy workout." But once in his basement, Greitens taped her hands to pull-up rings, blindfolded her, and started kissing and disrobing her without her consent, according to her testimony.

Then she saw a flash and heard a click, like a cellphone picture, she said. The woman testified that Greitens told her: "Don't even mention my name to anybody at all, because if you do, I'm going to take these pictures, and I'm going to put them everywhere I can. They are going to be everywhere, and then everyone will know what a little whore you are."

Greitens, a married father of two young boys, repeatedly denied blackmailing the woman. He declined to say whether he took a photo.

Greitens, who had also served as a White House fellow and written a best-selling book, entered the 2016 gubernatorial race as a brash outsider. He won an expensive Republican primary, then defeated Democratic Attorney General Chris Koster in the general election to give Republicans control of the governor's mansion for the first time in eight years. Some considered him a potential future presidential contender.

Republicans also controlled the Missouri House and Senate, but there were frequent clashes between lawmakers and Greitens, who compared them to third-graders and labeled them "career politicians."

He confronted criticism from some educators and lawmakers for working to pack the State Board of Education with members who would fire the education commissioner. Greitens' use of a secretive app that deletes messages after they're read also sparked a review by Hawley.