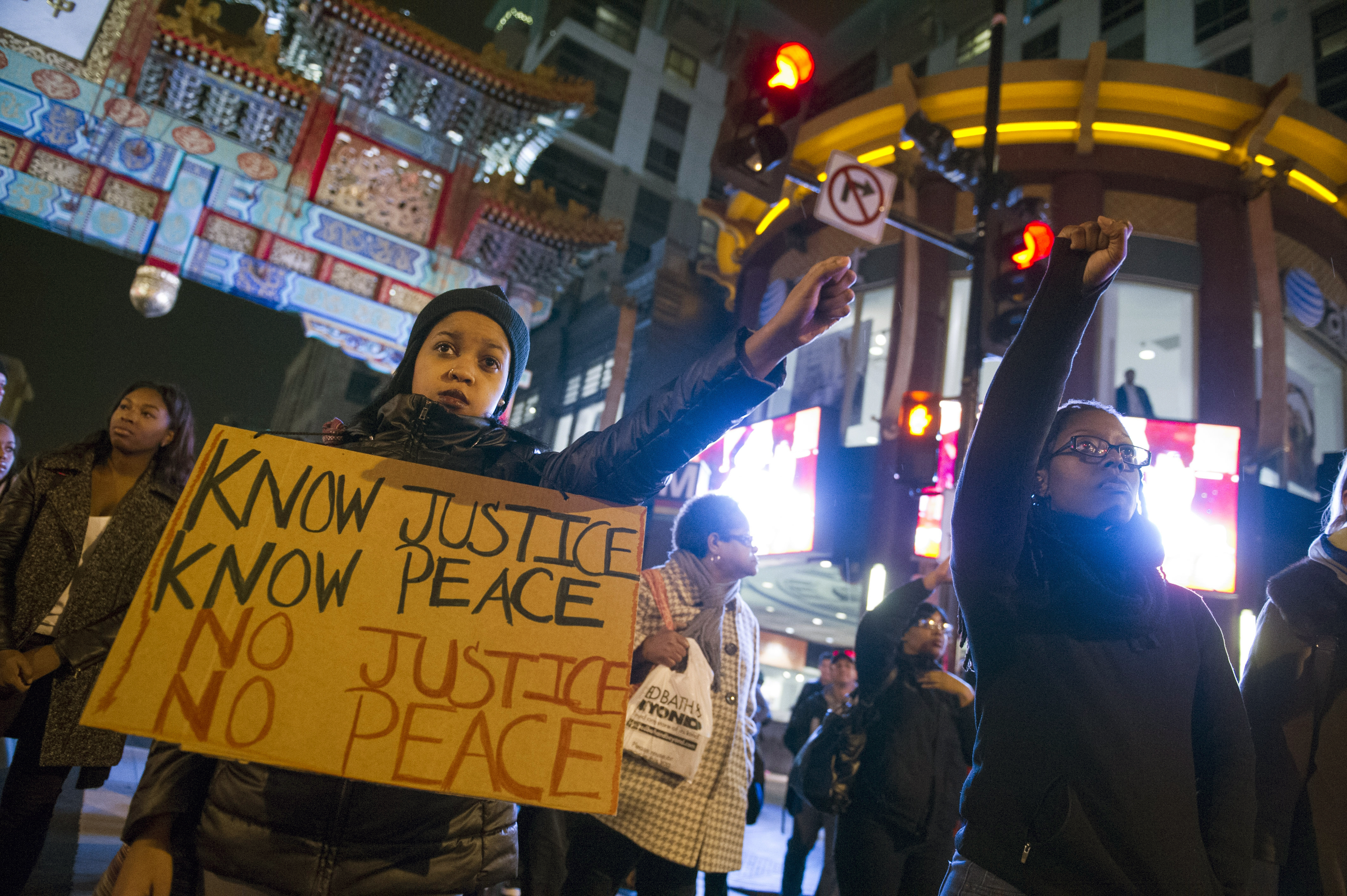 NEW YORK -- Demonstrators are marching, chanting and lying down in New York City and elsewhere for a third night to protest a grand jury's decision not to indict a white police officer in the chokehold death of an unarmed black man.

One group of over 100 protesters lapped Manhattan's Columbus Circle, then walked to an Apple store on Fifth Avenue. They laid on the store's floor for a few minutes as a symbolic die-in.

They proceeded down sidewalks through Fifth Avenue's renowned shopping district, striding with signs and chants of "black lives matter" and "I can't breathe." Some protesters had a brief standoff with police near the Rockefeller Center Christmas tree but moved on after being threatened with arrest, CBS New York reported.

"We are a peaceful movement. We abide by all laws. So we're going to keep it moving," a man said in a call-and-response chant. And they kept it moving, despite the cold, rainy conditions.

"The weather doesn't matter. This injustice has to stop," protester Rob Strype told WCBS. "I'm alive, so I have nothing to complain about, about a little rain."

Tourists and observers had mixed feelings, but the protesters definitely got their attention.

"I'm not too happy about the Ferguson protesters -- I think they're wrong," added Luke Matanin. "But the Garner (case), I think that's a reasonable cause to protest"

"I think there's something wrong, you know?" said Oscar Rosales. When asked if he was glad to see the protesters, he said: "I actually am. I am glad. If I had the time I would actually protest with them."

"We have a voice. As small as it may be, it matters. It will change something," one teenager told WCBS Radio reporter Marla Diamond.

Friday morning, a group of parents and children gathered in the West Town neighborhood in Chicago, carrying signs and shouting slogans to voice their outrage about grand jury decisions in the deaths of Michael Brown and Eric Garner, CBS station WBBM reported.

"I don't think it's fair that this is happening, and I think it needs to change fast and drastically," said 12-year-old Aidan Ryan.

"Whites don't have a privilege just to do what they want, and not get in trouble," 4th grader Spencer Ryan said.

Aidan said she's seen the video of Garner's death, "and it's just disturbing."

"I don't think it should have happened, and the guy should have been charged. It's not okay," she said.

Her younger sister, Sitota, said she hasn't seen the video, but "my mom just told me all about it, and I felt really sad."

Meredith West organized the protest with other moms. She told WBBM whether you're white or black, everyone has a responsibility for their actions.

"In my home, we try to talk about race every day, because the conversation is that people of color are having these conversations on a daily basis. It's not a choice. It's what they're forced to talk about," she said.

West said she wanted to hold the protest to help make sure "white people don't stay willfully ignorant to what's going on."

Police in Washington, D.C., were temporarily closing roads as demonstrators marched through the capitol city and held a "die in" near the Chinatown arch, according to CBS affiliate WUSA.

In suburban New York City, about 65 demonstrators lay down on a street corner in protest. Among them were Jason Walker of Atlanta, in New York for a wedding, and his 3-year-old daughter, Jaidyn. She told her father she wanted to lie down when the demonstrators did, and she lay on the sidewalk for the full 7 minutes, occasionally covering her eyes.

In New Haven, Connecticut, home of Yale University, hundreds of demonstrators marched Friday afternoon from the law school to the courthouse. In New Jersey, dozens of students from Rutgers University walked through New Brunswick, slowing downtown rush-hour traffic to a crawl and forcing the city to postpone a tree lighting ceremony scheduled at Monument Square.

In Colorado, students walked out of class for a third day Friday to protest the decisions not to prosecute police in New York and Ferguson, according to CBS Denver.

In Aurora, a suburb of Denver, eighth-grader Bennie Mahonda walked about 5 miles to the municipal center, shouting "Hands up, don't shoot!" to honks from passing cars. She had her parents' permission but promised her mother she would return to class after the demonstration, which she called "social studies outside of class."

"It makes us kids feel unsafe, that we're outsiders, enemies of society," Bennie, who is black, said of the decisions by the grand juries in the Michael Brown and Eric Garner cases.

In Florida, activists marched through the streets of midtown Miami and blocked a major causeway connecting Miami to Miami Beach. In Providence, Rhode Island, several hundred people blocked downtown streets, while city police had to stop some protesters from walking onto Interstate 95 on Friday night. No arrests were reported.

The protests have been mostly peaceful.