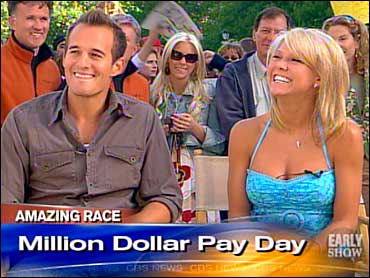 "The Amazing Race All-Stars" season finale took the final three teams from Guam to Hawaii to San Francisco. All the teams held the lead in the final leg, but dating couple Eric Sanchez and Danielle Turner cracked the code to make it to the finish line first.

Eric and Danielle, who met while racing against each other during Season 9, beat out two other tough teams, former beauty queens Dustin Seltzer and Kandice Pelletier and cousins Charla Baklayan Faddoul and Mirna Hindoyan, to claim the $1 million dollar prize.

But their final leg was a nail-biter. All three teams were neck-and-neck and Dustin and Kandice nearly made history by becoming the first all female team to win, but Eric and Danielle beat them by less than 10 minutes.

The key, Danielle said, was communication. Eric said Danielle spent a lot of time talking and gossiping. But it came in handy, because the two, who are no longer dating, were on the same page when it came time for them to crack the code. They had to answer questions about the other teams.

Even still, Eric, who lives in Florida, was tough on his ex-girlfriend, but he said she knew what she was getting in to.

"I told Danielle when we started the race, 'I'm going to be tough on you, it's a competition'," he told Early Show co-anchor Julie Chen. "I think she appreciates it. I mean, otherwise, you know, I think we would have been out a lot earlier if I had been yelling at her. I may have been a little rough at times."

"You were definitely a little rough at times," Danielle, of Staten Island, NY, said. "I got upset because I wanted him to enjoy more. Even during our idle time he was so stressed out. It was a lot on me but at the end it paid off."

The former couple, who will split the $1 million, said the race helped them realize that they just were not romantically compatible, though they remain friends.

"We get along now but we realized on the race our relationship really isn't going to really work out too well — two different people," Eric said. "But everything is good. I'm happy for her. She's happy for me. It's not the best place to test your relationship on 'The Amazing Race.'"

Runners up Dustin and Kandice also had their difficult times. They exchanged some heated words in Hawaii but said they remain best friends and even got a little bit of money for coming in second.

"The blonde bickering we had was nothing," Dustin said. "We hate fighting. We didn't want to fight. And so we were trying to hold it in but I think we were so exhausted and hungry."

Cousins Charla and Mirna said they were disappointed by their third place finish, but were excited to have the opportunity to compete again.

"We met so many of our fans along the way - everywhere, Malaysia, South Africa, Hong Kong - and it was an exhilarating experience for both of us," Mirna said. "We're so proud of Eric and Danielle because they worked their butts off, too."