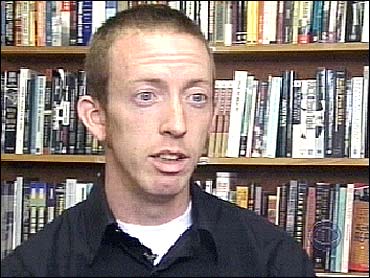 The extremist Earth Liberation Front, or ELF, has claimed responsibility for a rash of fires in California, including a $50-million development in San Diego.

But, he says, property destruction is a necessary tactic. The goal is economic sabotage, to try and inflict maximum damage to the entities that are destroying the natural environment.

And it's not just environmental extremists.

Equally stealthy animal radicals also are turning up the heat with an escalating rampage of destruction. In all, these extremists claim more than $100 million of destruction across the country.

Now, environmental extremists are taking aim at a new target: SUVs.
Hummers were torched near L.A., peppered with BBs in Houston and tagged in Santa Fe.

"Driving a hummer, a $50,000 GM tool for the rich, getting 10 miles to the gallon -- that is violence. Going in and torching those and getting rid of those is an act of liberation and should be applauded," Rosebraugh says.

Rosebraugh says years of peaceful protests failed to save the earth. He now considers the property attacks a better advertisement than a recruitment video he produced telling people to "take initiative, form your own cell and do what needs to be done to protect all life on this planet."

San Francisco chef Laurent Manrique felt his family threatened when animal rights radicals defaced his shop and sent video of his wife and infant with the words, "we're watching" -- all because he serves goose liver.

The FBI says what's going on is pure and simple terrorism.

"Those who've committed those crimes will find in the end they will be spending the rest of their productive lives in prison," warned Assistant FBI Director Ron Iden.

The FBI, using surveillance video from the L.A. Hummer fire, says it's confident of an arrest. Rosebraugh says the underground cells are so diffuse, a few arrests won't stop them.

"There's definitely going to be more actions, because that frustration level continues to grow."

Clearly frustration is growing on both sides.