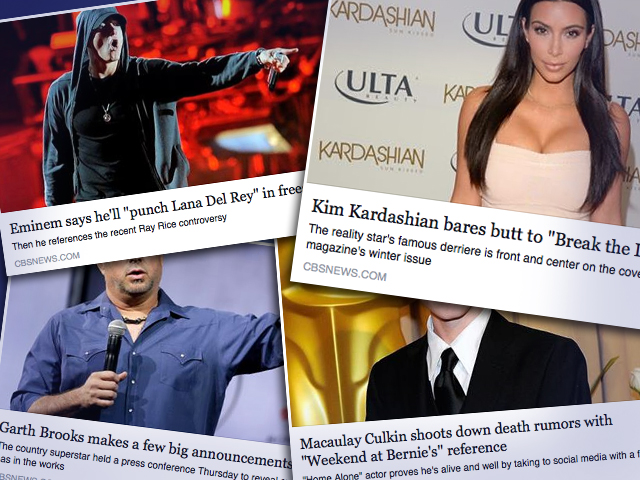 It was a busy week in the world of entertainment. We saw a revealing side of Kim Kardashian, false Macaulay Culkin death rumors and a racier-than-usual freestyle from Eminem.

Facebook has tallied the top 10 most discussed stories in entertainment this week. What had you talking? And what popped up most on news feeds across the U.S.?

Carol Ann Susi, the memorable voice of Mrs. Wolowitz on "The Big Bang Theory," lost her battle with cancer this week. She was 62.

2. Sister Cristina Scuccia releases a cover of Madonna's "Like a Virgin"

Now here's a cover song your iPod needs. Sister Cristina Scuccia, winner of "The Voice of Italy" 2014 and an Ursuline nun, belts out Madonna's classic in a new music video.

Looks like "Evil Dead" will rise again. Sam Raimi's cult film series will return in 2015 as a TV show on Starz. And yes, it will star Bruce Campbell. Groovy.

One of country's biggest names is back in a major way. Garth Brooks released a new studio album this week. "Man Against Machine" is available now.

Kim Kardashian may not have broken the Internet like she intended when she posed bare-bottom for Paper magazine, but she certainly created some waves.

7. Macaulay Culkin posts photos on Instagram to poke fun at Internet rumors about his death

False alarm! Macaulay Culkin is not dead. In fact, after death rumors started circulating, the actor posted pictures on his Instagram parodying the false news. At least he's in on the joke!

8. Freestyle rapping by Eminem and YelaWolf in Shady CXVPHER video gets buzz

Simmer down there, Eminem. The "8-Mile" rapper said he'd "punch Lana Del Rey in the face like Ray Rice" during a freestyle. OK, but how does he really feel?

9. The Simpsons co-creator Sam Simon to donate his $100 million fortune to charity

Sam Simon opened up for the first time publicly about why he's giving away his $100 million fortune to charity. All of his money will be going towards the Sam Simon Foundation, aimed at protecting the well-being of canines.

Critics and audiences are buzzing about Christopher Nolan's space film "Interstellar," which rose to the no. 2 box office spot this week. Damn you, "Big Hero 6"!

*Buzz rankings reflect the top entertainment topics being discussed on Facebook, Nov. 9 - Nov. 12, in the United States. Rankings are based on both frequency and momentum: the Facebook conversations that not only got a lot of buzz during the week, but also saw a notable increase compared with the previous week.