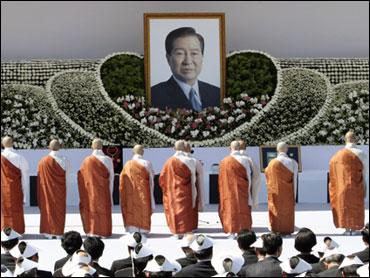 Timothy Belden, the former head of trading in Enron's Portland, Ore., office, admitted to one count of conspiracy to commit wire fraud and promised to cooperate with state and federal prosecutors as well as any non-criminal effort to investigate the energy industry.

"I did it because I was trying to maximize profit for Enron," Belden told U.S. District Judge Martin Jenkins.

"These charges answer the question that has long troubled California consumers: whether the energy crisis was spurred in part by criminal activity. The answer is a resounding yes," Ryan said.

Belden's attorney, Cristina Arguedas, said he was following Enron's instructions as he handled his trades and will "make amends for that by cooperating with the government."

Belden, 35, who now lives in Houston, was released on $500,000 bail. He faces a maximum five-year prison sentence.

"Tim Belden is not a high-level executive who was lining his pockets out of greed," Arguedas said. "He did his job. Tim was always honest with others at Enron about his actions, and was never disciplined by Enron.

"He now realizes that what he was taught to do was wrong," she continued. "He's going to make amends as well as he can by cooperating fully with the government and telling the complete truth about Enron's actions in the California energy trading market."

Investigators for a state Senate committee looking into the energy market have long considered Belden a key player in Enron's activities in California.

Belden was "the mastermind behind the strategies described" in memos that spelled out how Enron manipulated the California market, said Chris Schreiber, an attorney working with California's Senate Select Committee to Investigate Price Manipulation of the Wholesale Energy Market.

"He's been on our radar for a long time," Schreiber added.

Belden, the first person to be charged in the manipulation of Western energy markets, is the third Enron figure to be prosecuted.

Andrew Fastow, Enron's former chief financial officer, is accused of devising the company's complex web of off-the-books partnerships used to hide some $1 billion in debt from shareholders and federal regulators and is charged with money laundering, fraud and conspiracy.

Belden engaged in a lengthy dance with federal officials over his plea and eventual cooperation. In July, newspaper reports said Belden might be trying to cut a deal with prosecutors.

For months, federal investigators have worked with a California Senate panel investigating the state's energy crisis about evidence uncovered in its long-running investigation of market manipulation. A federal grand jury in San Francisco has been weighing criminal charges related to the energy crisis.

Internal company memos, first released in May, describe how Enron took power out of California at a time of rolling blackouts and shortages and sold it out of state to elude price caps, according to documents obtained by investigators.

Enron bought California power at cheap, capped prices, routed it outside the state, and then sold it back into California at vastly inflated prices, authorities said. The so-called "ricochet" deals were designed to circumvent the California-only price caps on wholesale energy.

"The conspiracy charged in this information allowed Enron to exploit and intensify the California energy crisis and prey on energy consumers at their most vulnerable moment," said Deputy Attorney General Larry Thompson, head of the Justice Department's Corporate Fraud Task Force.

Sen. Joe Dunn, D-Santa Ana, who chairs the select committee on price manipulation, called Belden's plea "the first of many dominoes that will fall, not only at Enron, but within other energy companies within the wholesale energy market. Tim Belden not only knows how Enron played, but how others played as well."