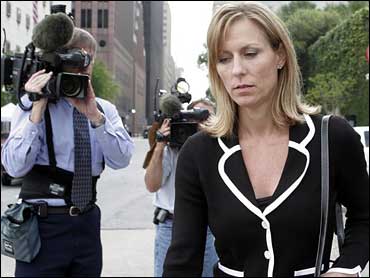 Lawyers for former Enron Corp. chiefs Kenneth Lay and Jeffrey Skilling launched their case Monday with the two men's former assistant, who said she believed a key prosecution witness lied about his involvement in company-related crimes.

As they did during the first 2½ months of the fraud and conspiracy trial of the two former chief executives, defense lawyers sought to erode prosecution testimony with their first witnesses.

Koenig pleaded guilty in August 2004 to aiding and abetting securities fraud and testified for the prosecution that he lied to investors about Enron's finances. During more than seven days in the witness chair in February, he denied claims that he had told Williamson he pleaded guilty to a crime he didn't commit.

The defense teams maintain that most ex-Enron executives who admitted to crimes did so out of fear of prosecution and in hopes of receiving lenient punishments rather than because they broke the law.

Williamson said Koenig, whom she described as a close family friend as well as a former boss, called her the day he pleaded guilty.

"I said, 'You're not guilty,' and he said, 'I know that, but in order for this to work, everyone needs to believe that I am."'

She added she did not believe he was guilty, even though Koenig told jurors in February, "I pled guilty because I am guilty."

Williamson said yes when prosecutor Kathryn Ruemmler asked if she thought Koenig lied during his testimony, which implicated Lay and Skilling in a string of falsehoods.

"Did he tell you he was pressured?" Ruemmler asked.

"No, he did not," Williamson replied.

Skilling lawyer Daniel Petrocelli said Monday that Skilling could testify as early as Wednesday afternoon, depending on how long the first few defense witnesses take on the stand. Lay's testimony will come later.

Lay's lead lawyer, Michael Ramsey, was absent from the trial Monday, undergoing outpatient tests on a stent he had inserted in his chest on March 24. Lay spokeswoman Kelly Kimberly said the attorney will have "an invasive procedure" Tuesday during which doctors can evaluate the stent.

"We are hopeful that he will be back at the trial soon," Kimberly said. The trial will continue despite Ramsey's medical condition.