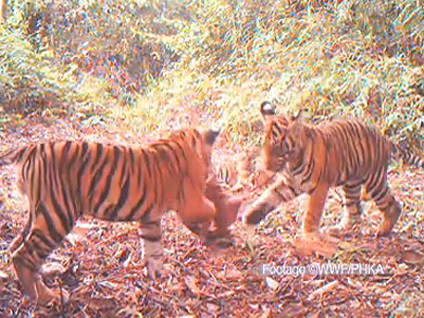 One of the videos shows three young cubs playfully chasing a leaf. Another, triggered by an infrared sensor, recorded giant cats strolling across a clearing at night.

Sumatran tigers are on the brink of extinction because of the destruction of forests, poaching and clashes with humans.

Their numbers have dwindled to about 400 from 1,000 in the 1970s, according to the World Wildlife Fund, which set up the cameras in Riau and Jambi provinces just three months ago.

Karmila Parakkasi, who heads the group's tiger research team on Sumatra island, said capturing a dozen cats in such a short period is astonishing.

"What's unclear is whether we found so many tigers because we're getting better at locating our cameras or because the tigers' habitat is shrinking so rapidly here that they are being forced into sharing smaller and smaller bits of forests," he said.

The cameras were set up in a corridor — not officially protected by the government — between the Bukit Tigapuluh National Park and Bukit Rimbang Baling Wildlife Sanctuary.

The WWF said timber permits are pending in the corridor.

Forestry Ministry spokesman Masyhud, who uses one name, could not yet determine which company already is licensed for the area, but said permits would not be issued for a known location or crossing area of an endangered species.