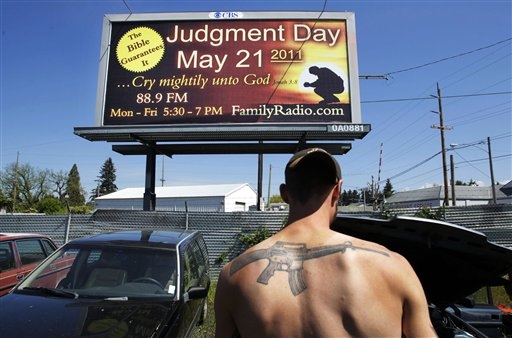 Mark it on your calendar: The world is coming to an end Saturday, if you believe Harold Camping.

But, reports CBS News Correspondent John Blackstone, if you don't -- skeptics are scoffing at the prediction.

Camping, an 89-year-old radio titan, does have plenty of followers, though, who are bracing for doomsday, Blackstone says.

He also has 2,000 billboards up proclaiming the Apocalypse is coming May 21.

Pictures: End of the world movies

"You and I," says Camping, "are living at the time of the end of the world."

He says says mathematical clues in the Bible point to Saturday as - it.

Caravans of followers have spread his forecast from Times Square to small towns.

"It will be hell on Earth," one follower says.

Camping even has a cartoon explaining it to children, which says it will be "a time of horrible death and destruction."

Camping's big-money campaign is financed by his Family Radio network, which has 66 stations in the U.S. alone.

"He has an international network of stations," Pastor Dave Nederhood, of the Alameda (Calif.) Christian Reformed Church points out. "He's not spending his own money, mind you. He's spending money that's been sent to Family Radio by people who have believed this lie."

"The Bible is not a textbook or ... a math book," says Minister Eric Vaughn of the Cross Church in Springdale, Ark. "It is a book of life."

An atheist group has responded with its own billboard -- suggesting a party when the end doesn't come.

"Every time religion displays its - warts -- we jump on it," says Larry Hicock, California State Director of American Athiests.

But Camping is certain he won't be available to talk about it Saturday. "There is no way I can schedule an interview, because I won't be here," he told CBS News.

This isn't the first time camping has predicted the end of the world. He said it would happen back in 1994. It didn't.