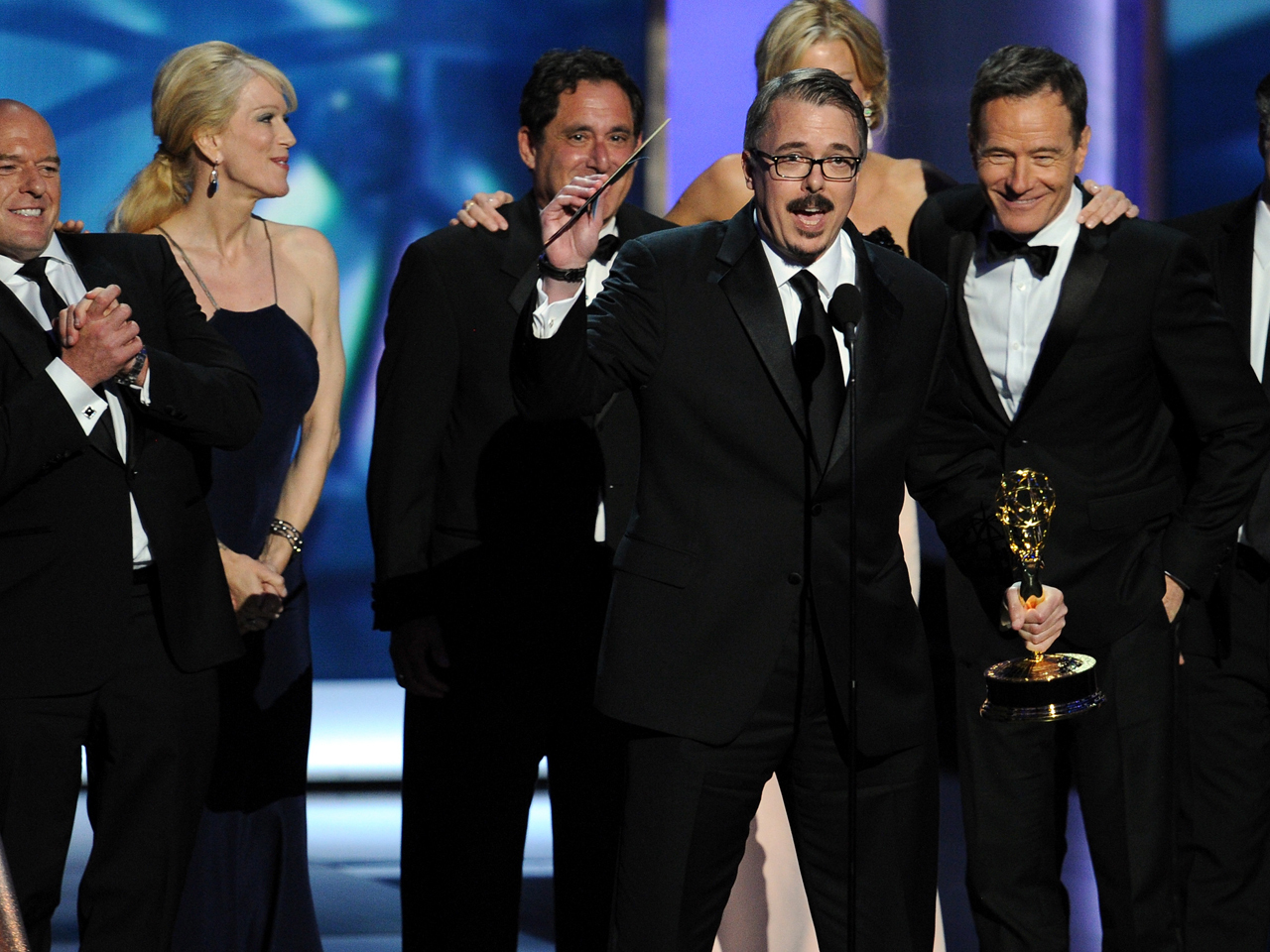 It was good to be "Breaking Bad" at Sunday's Primetime Emmy Awards, where it won the award for outstanding drama series.

The honor was the first time "Breaking Bad" had won the award despite three previous nominations. The win came one week before AMC is due to air the series finale.

"I did not see this coming," said series creator Vince Gilligan, tipping his hat to competitor "House of Cards," the first online contender for top Emmy honors.

Jeff Daniels won the Emmy for best drama series actor for "The Newsroom," with Claire Danes capturing top actress honors for her role in "Homeland."

Daniels noted that he'd also received an age 50-plus acting honor from AARP, which represents the interests of older Americans.

"With all due respect to the AARP, this is even better," Daniels said.

Danes, who captured her second trophy for the terrorism drama, paid tribute to one of the series' writers, Henry Bromell, who died last March and who received a writing Emmy posthumously Sunday.

Danes' win ended the hope that "Scandal" star Kerry Washington would become the first African-American actress to win in the category.

The ceremony often struck a melancholy note with extended tributes to stars and other industry members who died in the past year.

"Well, this may be the saddest Emmys of all time but we could not be happier," said "Modern Family" executive producer Steve Levitan, in accepting his award.

"This just in. Nobody in America is winning their Emmy office pool. Surprises galore," quipped host Neil Patrick Harris.

"This is so much good fortune it's almost too much to bear," said Louis-Dreyfus. "I'm very grateful to have the opportunity to make people laugh. It's a joyful way to make a living."

Parsons got emotional while accepting his third Emmy, saying, "My heart, oh my heart. I want you to know I'm very aware of how exceedingly fortunate I am."

Michael Douglas was honored as best actor for his portrayal of Liberace in the HBO biopic "Behind the Candelabra," besting his co-star Matt Damon. The film also captured a top trophy as best movie or miniseries.

"This is a two-hander and Matt, you're only as good as your other hand," Douglas said, then got really racy: "You want the bottom or the top?"

Bobby Cannavale, from "Boardwalk Empire," won as best supporting actor in a drama, and Anna Gunn from "Breaking Bad" won the best actress award in the same category.

Derek Hough of "Dancing with the Stars" won the trophy for best choreography, which offered an opportunity to include an upbeat dance number late in the show.

In the variety show category, "The Colbert Report" broke a 10-year winning streak held by "The Daily Show with Jon Stewart." It also won for best writing for a variety show.

Merritt Wever of "Nurse Jackie" won the night's first award, for best supporting actress in a comedy series, kicking off the ceremony on a surprising note and with a remarkably brief acceptance speech.

Backstage, she offered an explanation: "I'm sorry I didn't thank anyone. I was going to cry."

Tony Hale of "Veep" claimed the trophy for best supporting actor in a comedy, a category that has been the property in recent years of the men of "Modern Family."

The ceremony's first hour was relatively somber, with memorial tributes and a doleful song by Elton John in honor of the late musical star Liberace, the subject of the nominated biopic "Behind the Candelabra."

Robin Williams offered the first of five memorial tributes that were added to the traditional "In memoriam" group tribute. He paid tribute to actor-comedian Jonathan Winters, while actor-director Rob Reiner honoring the late actress Jean Stapleton, his co-star in the landmark 1970s series "All in the Family," and Michael J. Fox spoke in memory of "Family Ties" creator Gary David Goldberg.

"Glee" star Jane Lynch spoke in memory of her co-star Cory Monteith, who died of a drug overdose in July. "Cory was a beautiful soul. He was not perfect, which many of us here tonight can relate to," Lynch said. "His death is a tragic reminder of the rapacious, senseless destruction that is brought on by addiction. Tonight, we remember Cory for all he was, and mourn the loss for all he could have been."

Edie Falco also memorialized her late "The Sopranos" co-star, James Gandolfini, saluting him for his "fierce loyalty" to his friends and family and his work with military veterans.

"You all knew James Gandolfini the actor. I was lucky enough to know Jim, the man," she said in a tearful tribute.

The telecast also paid tribute to milestone television moments of the 1960s, including the coverage of President John F. Kennedy's assassination and the Beatles' performance on "The Ed Sullivan Show," in a segment narrated by Don Cheadle and with a performance by Carrie Underwood.

The ceremony, airing live on CBS from the Nokia Theatre in Los Angeles, began with an opener showing Harris in a room full of TVs, binge-watching all the night's nominated shows. (There was also a cameo from CBS Corp. chairman Les Moonves, as a security guard greeting the host as he arrived for the Emmys.)

On stage, Harris got some help -- and harassment -- from past emcees including Jimmy Kimmel, Jane Lynch, Jimmy Fallon and Conan O'Brien. Tina Fey and Amy Poehler shouted that the host should take off his pants and twerk, while Kevin Spacey channeled his scheming "House of Cards" character with a nefarious aside from the audience.

Heading into the Emmys, all eyes were on Netflix's "House of Cards." The political thriller, the first online program to compete for the top trophy, is part of a video universe explosion that's added streaming services including Netflix and websites like YouTube to broadcast, cable and satellite TV delivery.

There have been Internet nominees before, such as last year's "Web Therapy" and "30 Rock: The Webisodes" in a short-format category, but not in the premier fields of acting and best series.

At last weekend's creative arts Emmys for technical and other achievements, "Behind the Candelabra" received a leading eight awards. Overall network leaders included HBO with 20 awards, followed by CBS with 15 and NBC with eight.