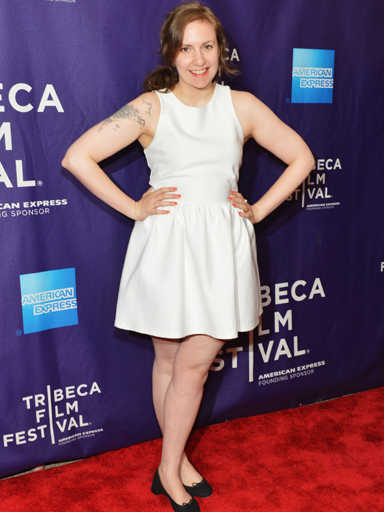 Here's what some of them had to say about their nominations:

"I have had the shriekiest morning of my life. I literally feel like I got asked to the prom and engaged and told I was going to the moon all in one day. Not to be too dramatic." - Leah Dunham ("Girls") [Associated Press].

"It's insane. I can't believe it. And we're the show that's been there, too. That's weird, too. I can't believe we are on the air." - "Mad Men" creator Matthew Weiner on the show's 17 nominations [Associated Press].

"Right now I just have mimosas sort of swimming around in front of my eyes but I haven't actually managed to get a hold of one, so I think I need to go and put that right, and maybe a little champagne brunch. I have my family with me and my two small children, so as long as I can drink alcohol and keep them alive for the remainder of the day, that will be a job well done." - Damian Lewis ("Homeland") [Associated Press].

"It's kinda like, alright I've received enough love - I'm not entitled to this much love! But it's wonderful, really. I'm not one to throw a big bash for myself, so I'm going to go for a run - I'm going to sweat. That will be my celebration." - Bryan Cranston ("Breaking Bad") [The Hollywood Reporter].

"I think (the Emmy nomination) is just such an acknowledgement of Martha Gellhorn and that's where it fits because I wanted her to be discovered. I'm thrilled to be working in all different mediums, and to be honored in this one is just great." - Nicole Kidman ("Hemmingway & Gellhorn") [Deadline]

"There are so many amazing performances this year by actors I really admire, that it means a lot to me to being included among them." - Steve Buscemi ("Boardwalk Empire") [Deadline].

"I want to thank the Academy for honoring American Horror Story for all the incredible nominations. It's been wonderful to work on a show with such talented actors and the fabulous creative team of Ryan Murphy, Brad Falchuk and all the brilliant writers who make Constance such an interesting character to play" - Jessica Lange ("American Horror Story") [Deadline].

"I'm so excited to have been nominated for an Emmy, especially for '30 Rock,' which is an incredible show and also for playing a deranged and deceased world dictator who has divided the small country of my origin in two. That's the best part. I think that's what I'd call iron curtain irony," - Margaret Cho, "30 Rock" [CBSNews.com].

"I'm thrilled to be included amongst one of Modern Family's 14 Emmy nominations! I am celebrating with 10 gorgeous, tall, leggy showgirls. Not because that's how I roll but because I'm in rehearsal for The Producers at The Hollywood Bowl. Also, because I like to make Eric Stonestreet jealous" - Jesse Tyler Ferguson ("Modern Family") [TVLine].

"As the show enters its last season, I'm gratified to be nominated again by the Academy" - Alec Baldwin ("30 Rock") [Deadline].

"I was in the middle of a dream and my publicist rudely awoke me with a phone call -- I'm still kind of pissed about that. I don't like to be awaken. [Laughs] ... I just learned that [I'm now tied with Lucille Ball's record of 13 nominations] this morning; I had no idea beforehand and I'm stunned by it. I'm really actually made speechless by it and don't even know what to say." - Julia Louis-Dreyfus ("Veep") [TVLine].

"I love this part, it's one that I would love to play for a long time. When I read the pilot, I thought it was the funniest script and it spoke to me. I never considered doing a network pilot, but this was too good. I've had an incredible experience and I'm a total convert to TV... Series creator Liz Meriwhether is a true genius and I'm lucky to collaborate with her and create this character." - Zooey Deschanel ("New Girl") [Deadline].

"Zooey [Deschanel] and I are already discussing what we're going to wear. We're coordinating. We want to make sure we don't wear the same outfit because that would be humiliating" - Max Greenfield ("New Girl") [TVLine].

"This is an incredible feeling. It is wonderful! To be nominated in this category and be in the company of these amazing women is a real honor and I am truly grateful to the Emmy voters for putting me in there," - Michelle Dockery ("Downton Abbey") [TVLine].

"To be part of a show like Downton Abbey is thrilling enough, that it has been embraced by American audiences to the extent it has and for the show to have received 16 nominations from the Emmy voters this year is astonishing. I can hardly believe that I've been nominated alongside five legends of contemporary television drama - Steve, Bryan, Michael, Damian and Jon. I'm truly honored" - Hugh Bonneville ("Downton Abbey") [TVLine].

"I love 'Nurse Jackie' and I'm very honored to be recognized by my peers. This year is particularly exciting with several of my castmates also being nominated. It is great year for Nurse Jackie!" - Edie Falco ("Nurse Jackie") [TVLine].