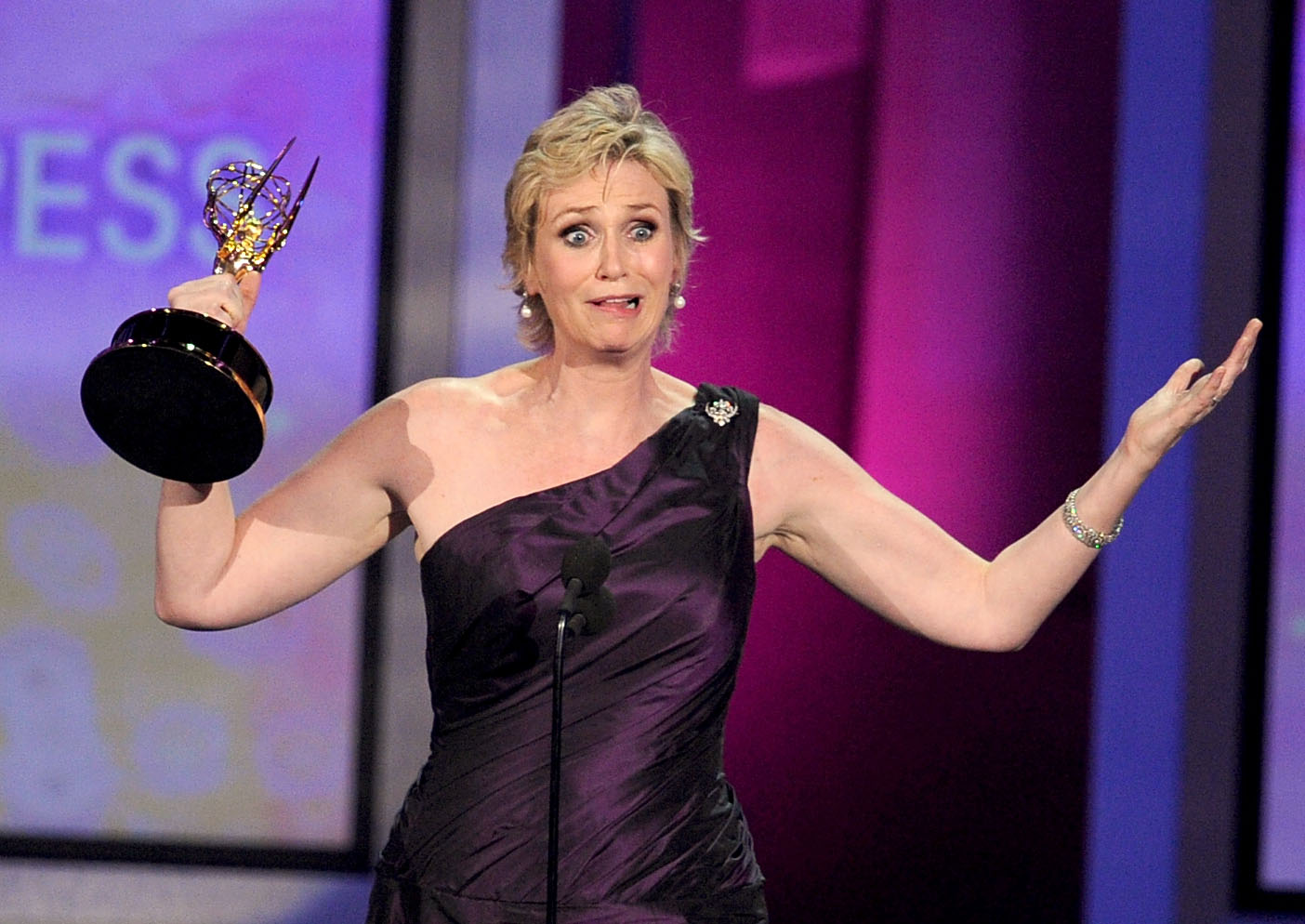 LOS ANGELES (CBS/AP) All the colors of the rainbow - purple, red, green, yellow and blue - were displayed in their Emmy glory Sunday night on the red carpet at the Nokia Theater in Los Angeles.

January Jones and Christina Hendricks, both from the heavily stylized "Mad Men," lived up to their on-screen fashionista counterparts in colorful look-at-me gowns. Jones wore a bright, electric-blue corset gown with an uneven hem and stiff A-line skirt by Versace, and Hendricks wore a pale lilac Zac Posen with feathers on the sleeves and hemline and the very low neckline that TV audiences have grown accustomed to seeing her - and her hourglass figure - in.

But Zarian said that while he appreciated the risks both actresses took, they ended up with dresses that would get more attention than they did.

He said Jones' dress was so that it wore her. Zarian also Hendricks' gown "had too much going on for such a voluptuous figure."

Lea Michele, a fairly new player to the red-carpet frenzy, nailed it in a very grown-up navy Oscar de la Renta gown with a strapless neckline and ruffled mermaid bottom.

"I wanted to do blue - I've done black and green," Michele said. "I was ready for blue to be the color, and I love Oscar de la Renta so when I saw this, it was like he read my mind."

This could have been a too-mature look for Michele, but her youthful energy was her best accessory, said Zarian.

Michele is petite, noted Karla Martinez, fashion market director for W magazine, but the silhouette of her gown accentuated her shape just right.

Sofia Vergara went with the statuette look in a gold, ombre beaded Carolina Herrera that Martinez loved, but she thought the matchy-matchy, oversized gold earrings were too much.

She did like the diamond Stephen Russell pins that new mom Amy Poehler used to jazz up her tank-strap slate-blue Max Azria gown and the floral Lorraine Schwartz earrings on Jane Krakowski.

Krakowski also touched on the blue, one-shoulder and updo trends in her custom Escada gown and soft, wavy locks.

Elisabeth Moss wore a chic, dove-gray Donna Karan one-shoulder, and Julie Benz had one a white one by Pamella Roland.

Julia Louis-Dreyfus found a way to stand out in black: She tapped longtime friend Narciso Rodriguez to make her black, square-neck gown with a sheer panel on the bodice that should send everyone to the gym. Her Irene Neuwirth turquoise earrings and bracelets captured the right seasonal, boho vibe.

Tina Fey, in an Art Deco-style Oscar de la Renta, and Eva Longoria, in a tight-bodice, ruffled-bottom Robert Rodriguez, also were in the black-dress club that's always in force at awards shows.

Kelly Osborne, who's joining E!'s "Fashion Police," showed off her post-"Dancing With the Stars" shape in a sophisticated black gown with a V-neck and jeweled gathers at the shoulders by Tony Ward.

Heidi Klum did black, but she went short in a micro-mini by Marchesa. "Well, you kind of look at what the choices are and then you kind of go with what you love the most," she said. "It's not like there's a whole game plan, it has to be short, or anything like that."

Jamie Cadwell, director of the Diamond Information Center, noted that Kardashian did the stacks of diamond bracelets that is "the modern way to do diamonds." (Kardashian's platinum cuff bracelet with 80 carats of champagne and white diamonds were by Lorraine Schwartz.)

W's Martinez was pleased to see so many men in classic bow ties, though, Jimmy Fallon and Jon Hamm, among them.

"Glee" creator Brian Murphy bought into the blue trend big time, wearing a blue jacket, tie and mirrored sunglass lenses. He gave the rare shout-out to the designer Tom Ford in his acceptance speech after winning the award for directing a comedy series.