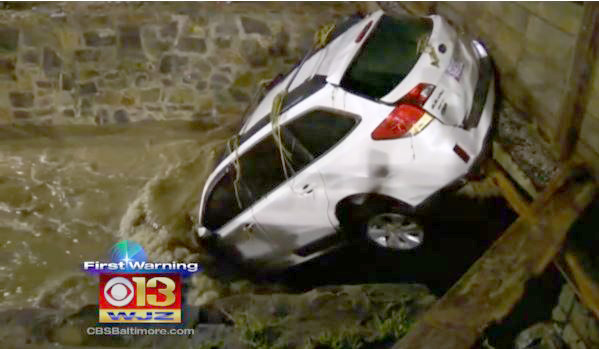 BALTIMORE -- At least two people have been found dead after severe flooding left a path of devastation across the state on Saturday night, according to Howard County spokesperson Andy Barth.

Barth told CBS Baltimore on Sunday the body of a woman was found dead in Howard County, but could not confirm her identity at this time. Barth said later a man had also been found dead amid the flooding.

Governor Larry Hogan signed an Executive Order declaring a state of emergency in Howard County on Sunday morning, according to a press release from his office.

One of the areas hardest hit was Historic Ellicott City, where floodwaters left a trail of devastation, damaging buildings, vehicles and roads. First responders there made "numerous water rescues," according to fire officials.

County officials urged many residents to relocate to higher ground in case an upstream dam should fail.

There was "tremendous damage" to buildings and vehicles in Ellicott, but there were no injuries reported there, Howard County Executive Allan Kittleman told CBS Baltimore in a phone interview.

In the aftermath, parts of Main Street in Historic Ellicott City had collapsed. Displaced residents from homes under evacuation orders were offered shelter at the county recreation center.

Courtney Weglein, who captured dramatic video of the flooding, said the water got so high at one point that a man had to be carried to safety. "It was insane," she recalled. "It was a flash flood. I literally came here, I thought we're going to have dinner. Within five minutes, it was panic and my friend was pulling someone out of there, and I've never seen anything like it."

Another man told CBS Baltimore the water came all the way up to his waist. The floodwaters swept some cars into others. Others weren't as fortunate; one plunged nose first into a channel and another was completely totaled.

"You know, all I can say is, I'm just happy to be alive," said Weglein.

Ellicott City, just west of Baltimore, is consistently ranked among the best places to live in America by Money magazine.

The picture wasn't any prettier in Baltimore, where city police reported about 9:40 p.m. that Interstate 83 between Falls Road and Coldspring Lane was closed due to flooding, and advised drivers to take alternate routes. The roadway has since reopened.

City firefighters saved a driver who was stuck on top of their car near the corner of Clipper Mill and Union Road about 9 p.m. as rushing waters carried other vehicles away.

The flooding near Jones Falls Expressway was so bad, as many as 20 vehicles were stranded in the rising waters. Several nearby agencies, including Harford County Fire Rescue, were called in to help rescue those trapped inside their vehicles.

At its peak, the severe weather knocked out power to more than 10,000 customers spread across Baltimore, Howard and Montgomery counties and Baltimore City, according to BGE's outage map, including nearly 8,000 in Howard alone.

The total number of outages has since dropped as crews work to restore power and water service to affected residents.

Police and first responders have urged residents to be safe by staying indoors and avoid getting on the roads.