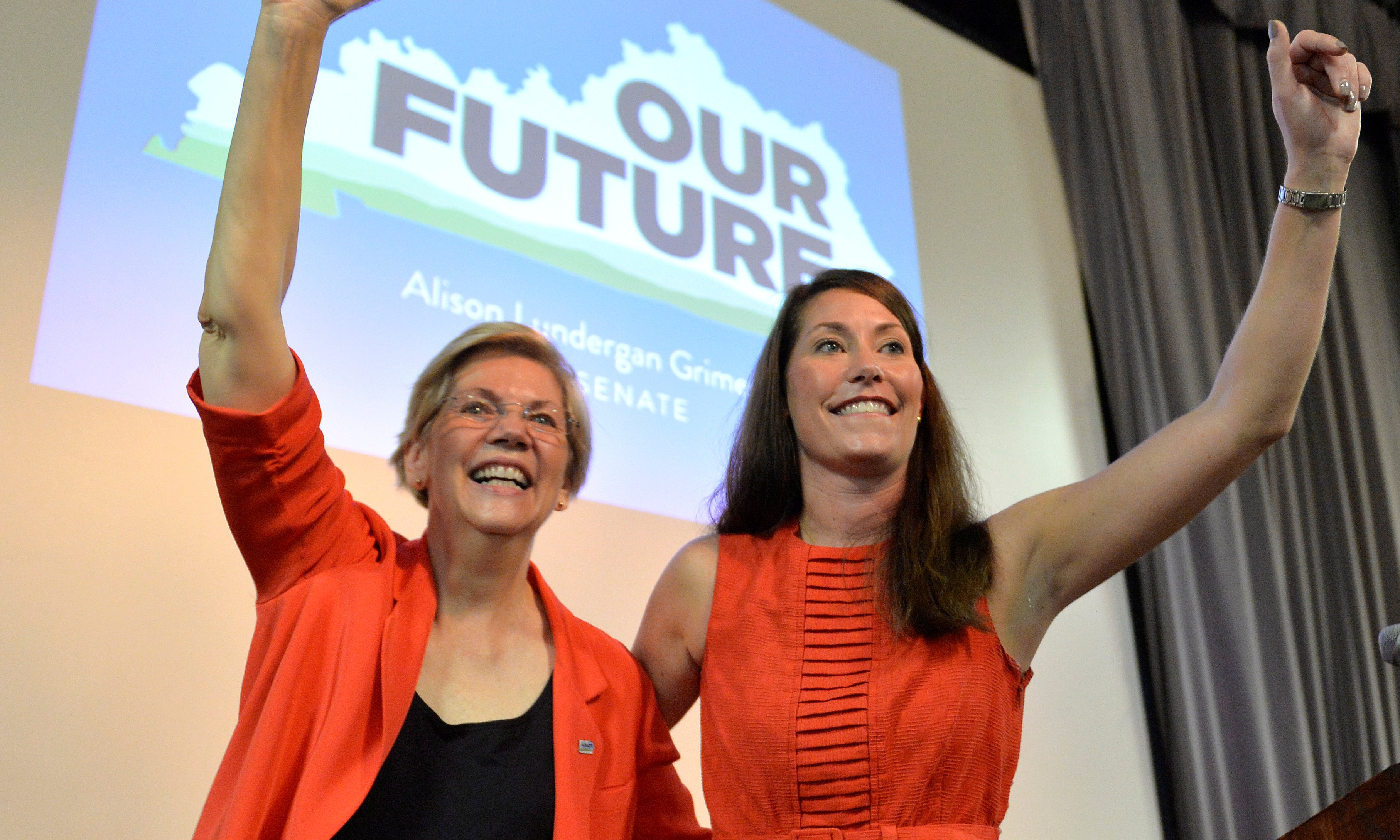 As midterm election campaigns continue to unfold, Elizabeth Warren is a model of ubiquity. There's nowhere she won't go to boost Democrats -- from the liberal coasts to the upper Midwest to the conservative Appalachian precincts of coal country.

Candidates from West Virginia and Kentucky, states where a visit by President Obama could doom Democrats' prospects, are calling after Warren. Sure, she is an unabashed supporter of Obama and Democratic leaders in Congress. (Progressives now identify themselves as part of the "Elizabeth Warren wing" of the party.) Her backing of the administration's new regulations on carbon emissions, for example, puts the Massachusetts senator at odds with many voters in those states.

But it's Warren's brand of economic populism that candidates are after. Her Wall Street vs. Main Street message resonates particularly well with working-class voters in these states, and anywhere per capita income is lower than the national average, Democrats say.

It's what brought her to Louisville over the weekend to campaign and fundraise for Alison Lundergan Grimes, who is running against Senate Minority Leader Mitch McConnell in November. Warren's appearance in this coal state elicited near glee from Republicans hoping Obama is a weight on Grimes and other candidates.

Warren had been a hero of the left as a strong consumer advocate since before her Senate victory over Scott Brown. But that 2012 race highlighted her national political abilities. Even as a candidate herself, she was helping to rake in cash for other Democrats. This capacity, along with her recently released book and a busy campaign tour schedule have raised questions about her interest in running for president, particularly if Hillary Clinton chooses not to.

The freshman senator has dismissed the possibility for 2016. But in 2014, at least, she is a vaunted surrogate for congressional candidates in this high-stakes midterm year.

This cycle, Warren has raised $2.3 million for 28 Democratic candidates, either through fundraising emails, personal appearances, or checks cut by her PAC, her political operation told RCP. Some candidates on the list include vulnerable Senate colleagues like Mark Pryor in Arkansas, Kay Hagan in North Carolina, and Mary Landrieu in Louisiana.

Her appearances can generate as much as $250,000 for campaigns and causes, as she did for Sen. Jeff Merkley in Oregon last month.

Obama is unpopular in the Mountain State, having lost there by 27 points in 2012, and would not be welcomed by the Tennant campaign. But the candidate invited Warren to help her roll out her education policy agenda on July 14 in the state's eastern panhandle and to help her paint Capito as a supporter of Wall Street.

"Like Tennant, Warren grew up in a working-class family and worked to help make ends meet," the West Virginian's campaign said. "Warren took babysitting jobs and worked at her aunt's restaurant after her dad had a heart attack and lost his job. Tennant worked her way through college at WVU on a minimum wage job at a Morgantown florist shop -- her dad helped make up the rest of her tuition by selling cows."

Warren's student loan bill, which would close tax loopholes for high-income earners to help pay down interest rates, failed to overcome a filibuster earlier this month but endeared at-risk congressional candidates to the Massachusetts senator. She is using the legislation on the campaign trail to club Republican opponents; Democrats are also using it as a women's issue.

"One way I'm going to start fighting back is I'm going to go down to Kentucky and I'm going to campaign for Alison Lundergan Grimes," Warren told MSNBC after the Senate vote, blaming Minority Leader Mitch McConnell for the filibuster. Warren will attend education events with Grimes to talk about college affordability. She also blasted out a fundraising email on behalf of the challenger, asking supporters to donate to the campaign to unseat McConnell.

But with Warren's visits, candidates like Tennant and Grimes also have to make clear that they disagree with her on other issues important to voters, such as coal and guns. "Natalie Tennant supports coal -- period. Natalie will stand up to President Obama, the EPA, Harry Reid and anyone else who tries to undermine West Virginia coal jobs," Tennant Communications Director Jennifer Donohue said.

The campaign also forwarded a statement from Warren: "Natalie and I don't agree on every issue. For example, she has made clear to me that she will fight against EPA regulations that I support if she believes it means protecting coal jobs for West Virginia."

Republicans aiming to tie Grimes and Tennant to Obama seemed excited about Warren's visits, and highlighted her positions on gun control and on the Environmental Protection Agency rules. "Grimes' support from liberals like Barack Obama, Harry Reid and Elizabeth Warren illustrate that she can't be counted on to defend Kentucky from the very liberals declaring a war on coal," said NRSC spokeswoman Brook Hougesen.

Warren has also endorsed and sent fundraising letters on behalf of Michelle Nunn, who is running in Georgia's open U.S. Senate contest. Soon after Iowa Senate candidate Bruce Braley made an embarrassing gaffe that insulted farmers in the state, Warren came out in support of him and sent similar fundraising missives. She has also backed Senate hopeful Rick Weiland in South Dakota. And she recently traveled to Minnesota to raise money for Al Franken.

Warren became known for her fundraising prowess when running against Scott Brown in the $68 million campaign for the Senate seat she now holds. While seeking office herself, she also raised money for other Democrats that year.

And she is still targeting Brown. On Monday, she will travel to New Hampshire to stump for his opponent there, Sen. Jeanne Shaheen.

Caitlin Huey-Burns is a congressional reporter for RealClearPolitics. She can be reached at chueyburns@realclearpolitics.com. Follow her on Twitter @CHueyBurnsRCP.