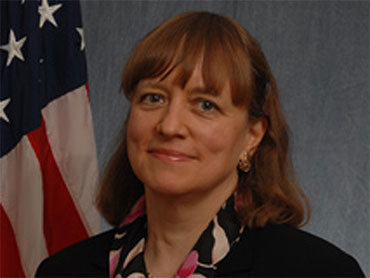 The head of the troubled U.S. agency that oversees offshore drilling - which President Obama said was "plagued by corruption" at the beginning of his presidency - resigned under pressure Thursday, Democratic sources said, as the president moved more aggressively to take charge of the Gulf oil spill.

"She did it on her own terms and her own volition," Salazar told members of Congress. "All I can really tell this committee is she is a good public servant."

CBS Radio News Correspondent Bob Fuss reports that Birnbaum was supposed to testify at the hearing with Salazar.

Birnbaum was brought in less than a year ago to try to revamp the Minerals Management Service, or MMS, but lost her job after a new report of how truly bad things are in the agency, Fuss reports.

"She helped us in moving forward in addressing what was a very broken system that we found when we came into the Department of Interior," Salazar said during Thursday's hearing.

"I found out about her resignation today," the president said, adding that Salazar had been testifying on Capitol Hill and had not been in contact with him. "I don't know the circumstances in which this occurred."

Plans were already in place to split the MMS up before Birnbaum's resignation became public, Fuss reports. Those plans would separate those who collect the royalties from those who are supposed to inspect for safety.

Reid also asked whether it was fair to blame the Bush administration for the failures at MMS given that its problems were documented in a report well before Mr. Obama took office.

"Salazar came in and started cleaning house, but the culture had not fully changed in MMS and absolutely I take responsibility for that," Mr. Obama said. "There wasn't sufficient urgency in terms of the pace of how those changes needed to take place."

However, the president said there was a clear distinction between the agency's management before he took office and now.

"There's no evidence that some of the corrupt practices that took place earlier took place under the current administration's watch, but a culture in which oil companies were able to get what they wanted without sufficient oversight or regulation, that was a real problem," Mr. Obama said.

"The departure of Elizabeth Birnbaum from MMS does not address the root problem. She has only been the public face of MMS for 11 months and the most serious allegations occurred prior to her tenure," said Rep. Nick Rahall, D-W.Va., chairman of the House Natural Resources Committee.

"This might on the surface be a good start but must not be the end game," Rahall said.

In his opening remarks, the president described the MMS as "plagued by corruption for years" when Salazar took office and that Salazar "took immediate steps to clean that up."

"This spill has made clear that more reforms are needed," Mr. Obama said Thursday. "For years there's been a scandalous relationship (between oil companies and regulators). That's why we decided to separate the people who permit the drilling from those who do the safety of the drilling."

News of Birnbaum's departure came just hours before Mr. Obama's news conference on the oil spill, where he extended a moratorium on new deepwater oil drilling. It was a day of fast-moving developments in Washington and in the Gulf, where engineers worked with some apparent success to stanch the gushing leak five weeks into the catastrophe.

In light of the disaster in the Gulf, Birnbaum defended her agency until the end in testimony she gave Wednesday before the House Natural Resources Committee.

"Many MMS staff have worked their entire careers to prevent this kind of thing from happening, and we will not rest until we determine the causes so that we can do everything possible to reduce the risk of its happening again," Birnbaum said.

Birnbaum was out after she and her agency came under withering criticism from lawmakers of both parties over lax oversight of drilling and cozy ties with industry.

And after receiving the results of a 30-day safety review from Salazar, Mr. Obama also planned to delay controversial lease sales off the coast of Alaska and cancel entirely plans for drilling lease sales in the Western Gulf and off the coast of Virginia, according to a White House aide.

The officials spoke on condition of anonymity ahead of Mr. Obama's midday news conference.

Mr. Obama has complained about the agency's "cozy relationship" and an Interior Department investigation, released earlier this week, revealed just how cozy that relationship was.

CBS News investigative correspondent Sharyl Attkisson reported this week that government inspectors at the dysfunctional agency were often little more than consorts of the industry they regulated, according to the Inspector General.

Inspectors even went so far as to let oil companies literally fill out their own inspection reports using pencils. MMS inspectors would write on top of the pencil in ink and turn in the completed form.

MMS is also supposed to investigate accidents and "make recommendations to prevent their recurrence." But CBS News dug through reports involving BP or Transocean dating back to 2006. In every case but one, MMS made no recommendations at all.

"Too cozy of a relationship," said Rep. Darrell Issa, R-Calif. "In many cases, criminal activity by getting too close and taking favors from the industry."

The cozy ties included workers who moved between industry and government jobs "with ease" -- friends who've "often known each other since childhood."