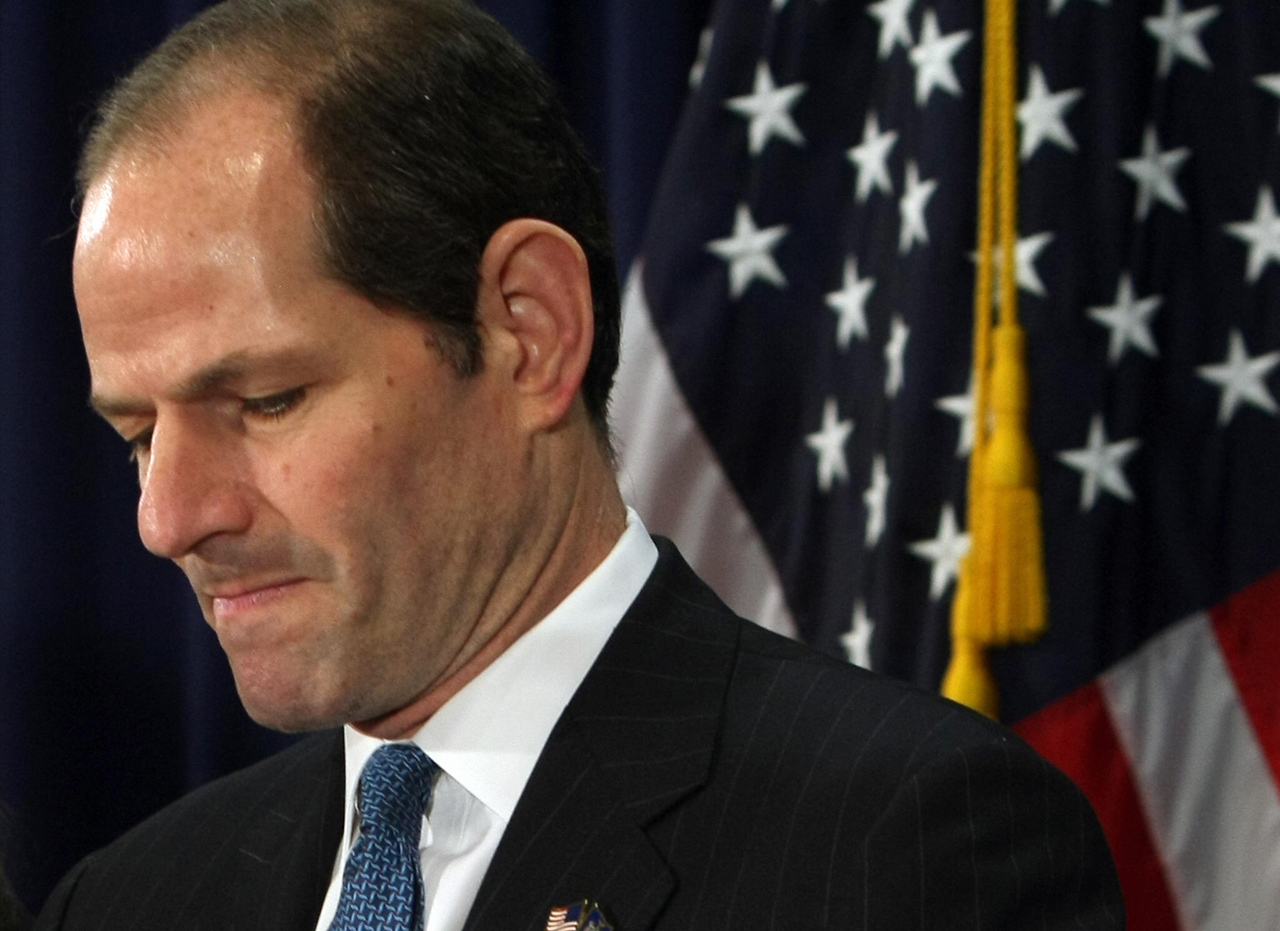 
Eliot Spitzer's return to politics has been as abrupt as his departure from it. Five years ago, the combative governor with plummeting approval ratings resigned from office after it turned out he was a regular customer of a high-end call girl service. On Sunday, he suddenly announced his candidacy for New York City comptroller. He told the New York Daily News that he was hoping voters would give him a "fair shot." In an interview with the New York Times, he said, "I'm hopeful there will be forgiveness. I am asking for it."

It is easier for Spitzer to ask for it than to give it. Initial commentary has compared Spitzer (a former Slate columnist) to Anthony Weiner and Mark Sanford, candidates who have also run on the forgiveness and redemption ticket. But these comparisons don't capture the audacity of Spitzer's gambit. His appeal based on forgiveness asks voters to demonstrate a quality he has never shown in public life and which he implicitly promises not to show in the future.

Before Spitzer became known as Client No. 9, he was known for his brash, hardball tactics. As New York's attorney general, he built a reputation as a fierce opponent of Wall Street, which created a successful platform for his gubernatorial bid. Once in higher office, things did not go well. After his first year, his disapproval rating was 48 percent to 37 percent. His rough style was such a problem, Quinnipiac pollsters asked voters whether Spitzer had the capacity to become "a kinder, gentler governor." Just before he was dragged down in the prostitution scandal, Spitzer was on the cusp of another one. The Albany district attorney declared, just days after Spitzer resigned, that the former governor had orchestrated a smear campaign against his political foe, Senate GOP leader Joe Bruno. Spitzer had authorized his staff to leak information about Bruno's use of state police aircraft, with the sign off: "F--- him. He's a piece of s---, shove it up his a-- with a red-hot poker."

After 2008, during his time outside politics, Spitzer was just as combative. He was not particularly forgiving in his assessment of New York Gov. Andrew Cuomo. In late 2010, Spitzer said, "Behind the scenes he is the dirtiest, nastiest political player out there, and that is his reputation from years in Washington." But none of this may matter. Or, if it does, it may help him. Spitzer may be asking for forgiveness of his sexual indiscretions, but he's running on his reputation as attorney general, which was built on ruthlessness.

On the first day of his campaign, Spitzer didn't refer back to his days as an unpopular governor. He says he hopes to reimagine the comptroller's office as he did the office of attorney general, where he earned the nickname, "The Sheriff of Wall Street." It was in this capacity that Spitzer, who has referred to himself as a "steamroller," had a famous blow-up with John Whitehead, the former head of Goldman Sachs. In 2005, Whitehead, a longtime Wall Street veteran (full disclosure: he was married to my mom until her death in 1997), wrote a letter to the Wall Street Journal saying Spitzer had gone overboard in accusing AIG Chairman Hank Greenberg of illegal activities without ever indicting him. It was a version of what Alan Reynolds of the Cato Institute called "Trial by Press Release."

According to Whitehead, Spitzer called him to respond to the letter: "Mr. Whitehead, it's now a war between us and you've fired the first shot. I will be coming after you. You will pay the price. This is only the beginning and you will pay dearly for what you have done. You will wish you had never written that letter." (So much for forgiving!) I may find Spitzer's overreaction symptomatic of an unsafe lack of stability and Lululemon-thin skin, but this is not likely to hurt Spitzer politically. As Ben Smith points out, "Who now thinks that prosecutors and regulators were too hard on bankers in 2005?"

To do well, Spitzer actually doesn't need voters to forgive him. He needs enough voters to not care. There are any number of ways they may come about. They can write off the prostitution rap as simply a personal thing, missing the hypocrisy -- Spitzer was paying for sex while as attorney general he was prosecuting prostitution rings. Or, they can value his lack of forgiveness as attorney general as a worthwhile quality in a job that requires him to monitor pension funds, bond issuances, and city spending, and which he hopes to expand into a watchdog of other areas, too. (Arguments on the merits are made by Reihan Salam and Josh Barro.) Or, they can just recognize his name and vote for the guy they know on the list.

One final way voters may back Spitzer is that they may decide that he has been punished enough by his time in public purgatory. It's the kind of consideration some asked Spitzer to show to those he targeted, both officially and unofficially. He has to hope that voters are more generous with the red hot poker than he was.