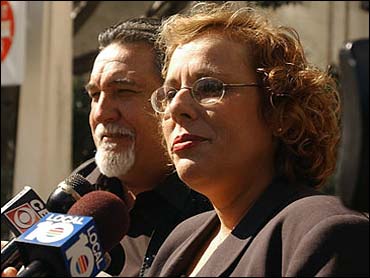 A trial opened Monday in a $3 million-plus lawsuit by 13 people who say they were injured or traumatized when federal agents seized a screaming Elian Gonzalez from his Miami relatives' home.

The opening witness was neighbor Maria Riera, who testified that she clutched her chest and thought she was dying when an agent doused her with tear gas during the Easter weekend raid in 2000 to reunite the 6-year-old boy with his father in Cuba.

The 13 neighbors and protesters are seeking up to $250,000 each, claiming that agents used excessive force during the armed raid.

"I was stopped by a gentleman on my left approaching me with a shotgun," said Riera, who lived across the street from the home where the boy had lived since shortly after he was rescued from a shipwreck on Thanksgiving Day 1999.

She said a black-garbed agent wearing a mask ordered her to "stand back" or he would shoot, adding a word of profanity. She said she complied, but a second agent approached with a gas gun as she stood in her driveway and left her in a gray cloud of tear gas.

Riera blames the gassing for aggravating an existing liver disease and continuing anxiety, and her ex-husband blames eye dryness and recent cataract surgery on the gas.

A total of 108 people sued over the raid, but U.S. District Judge K. Michael Moore limited the case to people who were not on the Gonzalez family property and were beyond police barricades.

Attorney Larry Klayman of the conservative group Judicial Watch, representing one woman suing the government, claimed in opening statements that federal immigration agents vented their prejudice against Cubans during the raid.

"This was a chance for payback to the Cuban community," he told the judge at the opening of a trial expected to take up to two weeks. "Agents intended all along to use excessive force."

Steven Handler, a Justice Department attorney, denied agents used undue force. He also said the plaintiffs either assaulted or obstructed agents or were not credible.

Elian, now 11, was one of three survivors of the shipwreck, which killed his mother.

The raid took place after the family refused to return the boy so he could be taken back to Cuba.