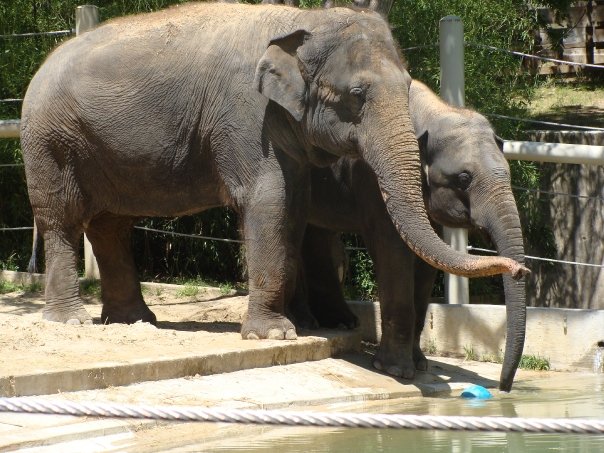 (AP) WASHINGTON - An elephant named Shanthi at the Smithsonian's National Zoo plays a harmonica with her trunk and appears to love doing it.

Video released Wednesday by the zoo in Washington shows the 36-year-old Asian elephant has a harmonica attached to her stall and plays tunes even when no humans are within view.

Elephant keeper Debbie Flinkman said Shanthi is "musically inclined," playing her own songs that always have a big crescendo at the end. Shanthi also likes to tap things, flap her ears against objects to make noise and rub her leg up and down shrubs to repeat noises.

"It is very good enrichment, especially for this specific elephant" because she is so interested, Flinkman said. Other elephants may notice the harmonica but are less interested.

Shanthi will play for several minutes at a time, exhaling to play a pattern, then inhaling for a different sound and moving to another end of the harmonica for a different note. Each time, she ends with a big exhale for a loud sound. After New Year's Day, she also played a plastic party horn that Flinkman brought to her for hours, blowing it as loud as she could. "It sounded like she was strangling a goose," Flinkman said.

Handheld harmonicas have been used with the elephants for years, but the zoo only recently added an activity wall where they could permanently mount two harmonicas for Shanthi to use on her own. Flinkman said she doesn't reward Shanthi when she plays on her own. It's something she enjoys.

Sometimes Shanthi will lower her ear to be closer to the sound.

"I try really hard to stay out of her line of sight because I don't want her to cue off of me," Flinkman said of Shanthi's music. "It just really amuses us. And I absolutely love it that it amuses her."

Shanthi was a gift from Sri Lanka in 1976 and is the mother of the zoo's 10-year-old calf Kandula.