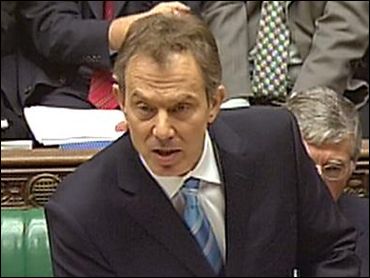 In the first test of voter opinion since Blair's landslide victory in the 2001 national election, Labor failed to benefit from a hoped-for "Baghdad bounce" following the successful military campaign in Iraq.

However, Thursday's midterm poll was unlikely to have any significant impact on the prime minister's political future. Blair, who has until 2006 to call a national election, dominates Parliament with a huge majority and, according to the latest poll, has boosted his popularity rating since the war.

The MORI poll for The Financial Times showed that 47 percent of people questioned were satisfied with Blair, compared to 45 percent who were not. The poll also found that 47 percent were dissatisfied with embattled Conservative leader Iain Duncan Smith, while only 22 percent thought he was doing a good job. MORI interviewed 2,008 adults for the poll and the margin of error was around 2 percentage points.

Duncan Smith shored up his vulnerable position as Tory leader by helping the party win more than 500 new seats on English local councils. Conscious that the Conservatives have made no significant dent in Labor's poll standing in six years, he had set a modest target of adding just 30 seats.

"This is a spectacular victory," Duncan Smith said in a statement. "The Conservatives are now the largest party of local government in Great Britain."

Local elections in Britain traditionally allow voters to vent their grievances about the party in power, and Labor officials played down the significance of the poor results.

"This is quite clearly a midterm result for us," Labor party chairman Ian McCartney told British Broadcasting Corp.

"The Conservatives have really flatlined," McCartney added. "They've got a false dawn."

Whether Thursday's results herald a Conservative revival is debatable. In local elections three years ago, the Tories gained 593 seats and Labor lost 568. The next year, Blair won a second landslide victory in national elections.

If Blair faces any real threat, it will be from the lack of support within his party. On two key votes in the run-up to war, record numbers of Labor parliamentarians voted against him. It remains unlikely, however, that they would fail to back Blair in any tight contest.

However, any erosion of Blair's electoral pull could threaten his push for Britain to adopt the Euro, which must be approved by referendum.

For Duncan Smith, intra-party rivalries are more threatening. He replaced the man Blair defeated in the 2001 vote, William Hague, more than 18 months ago, vowing to turn the party around. He has found few issues to galvanize the public.

The threat to his tenure as party leader was made clear Thursday when, despite the election successes, Conservative official Crispin Blunt resigned, saying Duncan Smith was a "handicap."

Voters were electing some 10,000 members on 308 English local councils as well as lawmakers in the Scottish and Welsh regional assemblies. No parliamentary seats were at stake, and Blair doesn't have to call a national election until 2006.

Returns from 287 councils showed the Conservatives gaining 539 seats while another opposition party, the Liberal Democrats, added 175. Labor had lost 768.

The anti-immigrant British National Party won 13 seats, a gain of 11 and its strongest showing to date. It won seven new seats in Burnley, a northern town torn by race riots two years ago, and became the second-largest party on the local council.

In elections to the Scottish parliament, Labor suffered several high-profile defeats but looked set to remain the biggest single party.

In Wales, Labor took half the 60 seats in the regional assembly, largely at the expense of the Plaid Cymru nationalist party.