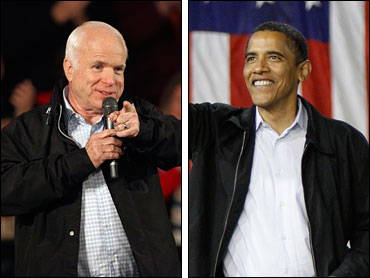 Barack Obama radiated confidence and John McCain displayed the grit of an underdog Monday as the presidential rivals reached for the finish line of a two-year marathon with a burst of campaigning across battlegrounds from the Atlantic Coast to Arizona.

"We are one day away from change in America," said Obama, a Democrat seeking to become the first black president - a dream not nearly as distant on election eve as it once was.

McCain, too, promised to turn the page of the era of George W. Bush, and he warned about his opponent's intentions. "Sen. Obama is in the far left lane" of politics, he said. "He's more liberal than a guy who calls himself a Socialist and that's not easy."

Republican running mate Sarah Palin was even more pointed as she campaigned in Ohio. "Now is not the time to experiment with socialism," she said. "Our opponent's plan is just for bigger government."

Late-season attacks aside, Obama led in virtually all the pre-election polls in a race where economic concerns dominated and the war in Iraq was pushed - however temporarily - into the background.

In the latest CBS News poll released on Monday, Obama held a nine point advantage, 51 percent to 42 percent. (Read more from the poll.)

At a rally in Florida on Monday morning, Obama sounded confident but said he expects Tuesday's outcome will be close. Obama said he's "one day away from changing the United States of America."

On the eve of the election, CBS Evening News Anchor Katie Couric asked Obama what his biggest Election Day fear was. .

"You know, I have to say that I feel pretty good about the fact that our campaign has done - has made a good of case for change as I think we could have," the candidate told Couric. "I mean, I have been a highly imperfect candidate. But our campaign as a whole, I think, has delivered on its promise to reach out to people who hadn't been involved in politics; to go into places that hadn't traditionally looked at a Democratic candidate.

"But ultimately it comes down to a bunch of people making their own individual decisions in that ballot box," Obama continued. "And so I'm sure what I'll feel is great interest in terms of how it turns out."

Early voting, more than 29 million ballots cast in 30 states, suggested an advantage for Obama as well. Official statistics showed Democrats who have already voted outnumbered Republicans in North Carolina, Colorado, Florida and Iowa, all of which went for President Bush in 2004.

Democrats also anticipated gains in the House and in the Senate, although Republicans battled to hold their losses to a minimum and a significant number of races were rated as tossups in the campaign's final hours.

By their near-non-stop attention to states that voted Republican in 2004, both Obama and McCain acknowledged the Democrats' advantage in the presidential race.

The two rivals both began their days in Florida, a traditionally Republican state with 27 electoral votes where polls make it close.

Obama drew 9,000 or so at a rally in Jacksonville, while across the state, a crowd estimated at roughly 1,000 turned out for McCain.

One day before the election, no battleground state was left unattended.

But Virginia, where no Democrat has won in 40 years, and Ohio, where no Republican president has ever lost, seemed most coveted. Together, they account for 33 electoral votes that McCain can scarcely do without.

Democratic volunteers in Maryland, a state safe for Obama, called voters in next-door Virginia, where McCain trailed in the polls. The Democratic presidential candidate's visit to Virginia during the day was his 11th since he clinched the nomination.

Unwilling to concede anything, McCain's campaign filed a lawsuit in Richmond seeking to force election officials to count late-arriving ballots from members of the armed forces overseas. No hearing was immediately scheduled.

Several hundred miles away in Ohio - the state that sealed Bush's second term in 2004 - voters waited as long as three hours in line to cast ballots in Columbus, part of heavily contested Franklin County. Poll workers handed out bottles of water to sustain them.

Lori Huffman, 38, a supervisor at UPS Inc., took the day off to vote early for her man, McCain. "It's exciting isn't it?" she asked, gesturing toward the long line of waiting voters.

"This is happening all over the state, from Cleveland to Dayton," said Gov. Ted Strickland, a Democrat trying to deliver his state to Obama.

Obama hoped so, after more than a year building an elaborate get-out-the-vote operation, first for the primary campaign, now for the general election.

The Democrat flew from Florida to North Carolina to Virginia, all states that went Republican in 2004, before heading home to Chicago on Election Eve.

Twenty-one months after he launched his campaign, he allowed, "You know. I feel pretty peaceful ... I gotta say."

If wanting it were all that mattered, the race would be a toss-up.

McCain, behind in the polls, set out on a grueling run through several traditionally Republican states that he has failed to secure. Florida, Virginia, Indiana, New Mexico and Nevada were on his itinerary, as was Pennsylvania, the only state that voted Democratic in 2004 where he still nursed hopes. His last appearance of the long day, past midnight, was a home state rally in Prescott, Ariz. Obama has been running television commercials in Arizona in the campaign's final days.

The surrogate campaigners included Sen. Hillary Rodham Clinton for the Democrats and former Massachusetts Gov. Mitt Romney for the Republicans. Both lost races for their party's presidential nomination earlier in the year, and both could be expected to try again if their ticket loses the White House.

Not so, President Bush.

Deeply unpopular, the man who won the White House twice was out of public view, an effort to help McCain.

Palin was racing through five Bush states Monday - Ohio, Missouri, Iowa, Colorado and Nevada - in an effort to boost conservative turnout for McCain. The Alaska governor has been a popular draw for many GOP base voters, and already, there was speculation about a future national campaign should Republicans lose in 2008.

Joe Biden, Obama's running mate, campaigned in Missouri, Ohio and Pennsylvania. "We are on the cusp of a new brand of leadership," he assured supporters.

Biden didn't say so, but he was as close to guaranteed a victory as any politician in America. Whatever the fate of the Democratic presidential ticket, he was heavily favored to win a new Senate term from Delaware on Tuesday.

Also on Monday, Obama announced that his grandmother, Madelyn Dunham, whose personality and bearing shaped much of the life of the Democratic presidential contender, has passed away following a battle with cancer.

He praised her as the cornerstone of his family, "a woman of extraordinary accomplishment, strength, and humility."