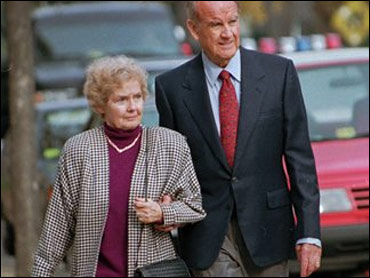 Eleanor McGovern, whose husband, George McGovern served as a U.S. senator from South Dakota and ran for president, died Thursday morning at the family's home in Mitchell, according to a Mitchell funeral home. She was 85.

Eleanor McGovern has suffered heart problems for five years and underwent bypass surgery last year. She had been under hospice care at the couple's Montana home, the former senator has said.

Eleanor Stegeberg was born Nov. 25, 1921, in Woonsocket and grew up on a farm during the Great Depression. When her mother died, the 12-year-old Eleanor and her twin sister, Ila, helped their father raise their younger sister.

George McGovern was introduced to Eleanor Stegeberg when she and Ila handed his debate team one of its few defeats while he was a student at Mitchell High School.

She graduated second in her high school class in 1940 and enrolled at Dakota Wesleyan University in Mitchell. She left school after a year to work as a legal secretary in Mitchell.

George McGovern had first asked Ila for a date only to learn she had a boyfriend. Eleanor was unattached, and after McGovern was drafted for World War II, they were married by his father, a minister, on Oct. 31, 1943.

The McGoverns had five children. One of their four girls, Teresa, died in 1994 at age 45 after a long battle with alcoholism. Intoxicated, she died of hypothermia after passing out in a snowdrift in Madison, Wisconsin.

Eleanor McGovern campaigned on her own for her husband across the country and appeared frequently on network television and radio programs on national and international issues.

After that, she addressed civic, academic and women's groups as an advocate for children, family life and the roles of women. She wrote articles and given interviews on a variety of topics, including alcoholism.

He and his wife had lived in Stevensville, Mont..

Eleanor McGovern was a member of the Women's Democratic Club and had served on the boards of Dakota Wesleyan, the Psychiatric Institute Foundation, Child Study Association, Erickson Institute of Chicago and Odyssey House of New York. She was involved with the Child Development Associates Consortium.

She and her family also established the McGovern Family Foundation in Washington, D.C., to raise money for alcoholism research.

In a 1996 lecture in Sioux Falls, Eleanor McGovern said she was still trying to come to grips with Teresa's death.

"I really don't have any answers to families except one thing I am sure of is to hate the disease but love the victim," she said.

The funeral will be held Friday afternoon at the First United Methodist Church in Mitchell.