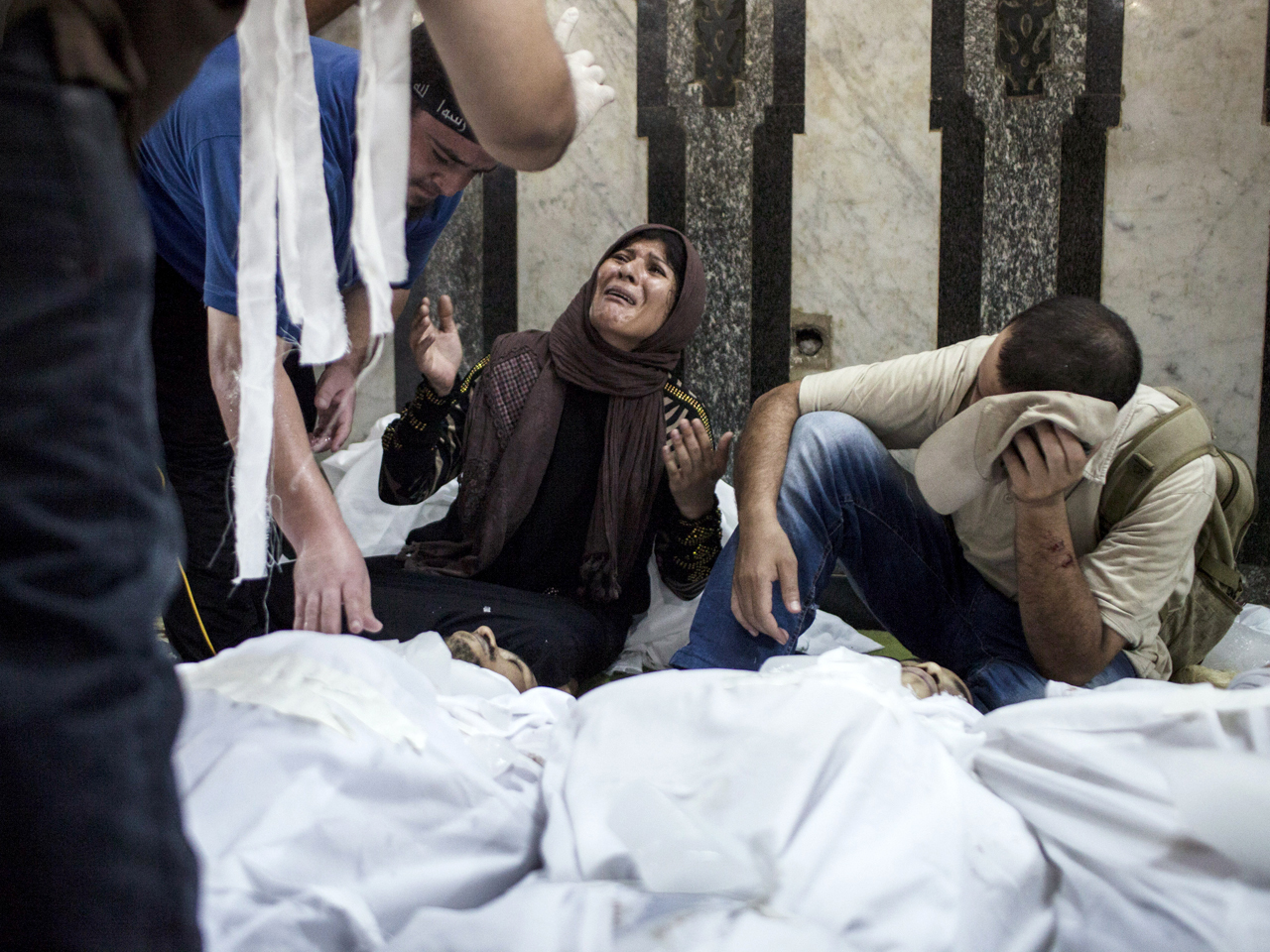 CAIRO Witnesses say that Egyptian security forces have stormed a Cairo mosque after firing tear gas at hundreds of Islamist supporters of the country's ousted president barricaded inside.

The sound of gunfire could be heard in the background.

Abigail Hauslohner, Cairo bureau chief for The Washington Post, told Al Jazeera English that it was uncertain how the fight at the mosque broke out.

"I have no idea the extent to which people in the mosque are firing back or whether this is mostly an onslaught from security forces," said Hauslohner. "It's difficult to tell. Obviously the security forces are very, very well-armed."

CBS News correspondent Charlie D'Agata reported from Cairo on "CBS This Morning: Saturday" that security forces had begun to allow people to leave that mosque where they had been trapped overnight; however, many of the roughly 1,000 supporters of Islamist President Mohammed Morsi's Muslim Brotherhood continued to remain inside the mosque.

They sought shelter at the mosque from Friday's fighting and found themselves there after a state-imposed curfew, D'Agata reports.

The mosque served as a field hospital and morgue following clashes Friday in the area. The protesters barricaded themselves inside overnight out of fears of being beaten by vigilante mobs or being arrested by authorities.

D'Agata reports that the Brotherhood called out for supporters to converge on the mosque and help "free their brothers."

Earlier, protesters vowed to defy a state of emergency with new protests on Saturday. Friday's marches in Cairo devolved into the fiercest street battles the capital has seen in more than two years.

An Egyptian government spokesman said Saturday that 173 people were killed Friday in what the Muslim Brotherhood called a "Day of Rage" — ignited by anger at security forces for clearing two sit-in camps earlier in the week, leaving hundreds dead.

Across the city Friday, police and armed vigilantes at neighborhood checkpoints battled Muslim Brotherhood-led protesters, with the sight of residents firing at one another marking a dark turn in the conflict.

Military helicopters hovered over downtown as residents furious with the Brotherhood protests pelted marchers with rocks and glass bottles. The two sides also fired on one another, sparking running street battles throughout the capital's residential neighborhoods.

The violence capped off a week that saw more than 700 people killed across the country. That toll surpasses the combined death toll from two and a half years of violent protests since the ouster of longtime leader Hosni Mubarak to the July 3 coup that toppled Morsi, who hails from the Brotherhood.

Unlike in past clashes between protesters and police, Friday's violence introduced a combustible new mix, with residents and police in civilian clothing battling the marchers.

Few police in uniform were seen as neighborhood watch groups and pro-Morsi protesters fired at one another for hours on a bridge that crosses over Cairo's Zamalek district, an upscale island neighborhood where many foreigners and diplomats live.

Friday's violence erupted shortly after midday prayers when tens of thousands of Brotherhood supporters answered the group's call to protest across Egypt in defiance of a military-imposed state of emergency following the bloodshed earlier this week.

Armed civilians manned impromptu checkpoints throughout the capital, banning Brotherhood marches from approaching and frisking anyone wanting to pass through. At one, residents barred ambulances and cars carrying wounded from Ramses Square from reaching a hospital.

Several of the protesters said they were ready to die, writing their names and relatives' phone numbers on one another's chests and undershirts in case they were killed.

Tawfik Dessouki, a Brotherhood supporter, said he was fighting for "democracy" and against the military's ouster of Morsi.

"I am here for the blood of the people who died. We didn't have a revolution to go back to a police and military state again and to be killed by the state," he said during a march headed toward Ramses Square.

At least 12 people were killed near the square as some in the crowd tried to attack a police station, security officials said.

The Facebook page of the army spokesman, Col. Mohammed Ali, accused gunmen of firing from the mosque at nearby buildings. The upper floors of a commercial building towering over Ramses Square caught fire during the mayhem, with flames engulfing it for hours.

Similar battles played out in cities across the country, where people brandishing weapons attacked police and residents fired at one another.

Gunmen targeted police checkpoints and at least 10 police stations came under attack. Egypt's security forces were rocked by the country's 2011 uprising that toppled Mubarak and have not fully recovered since.

In the province of Minya south of Cairo, protesters attacked two Christian churches, security officials said. At churches across the country, residents formed human chains to try to protect them from further assaults, and a civilian was killed while trying to protect a church in Sohag, south of Cairo, authorities said.

Many of Morsi's supporters have criticized Egypt's Christian minority for largely supporting the military's decision to remove him from office, and dozens of churches have been attacked this week. The coup that ousted Morsi followed days of protests by millions of Egyptians demanding the Islamist leader step down.

Mourad Ali, a spokesman for the Brotherhood, denounced the attacks on churches, saying they ran counter to Islamic principles and were an attempt to ignite sectarian divisions.

"Our stance is clear. ... We strongly condemn any attack — even verbal — on churches and on Coptic property. This holds true whether or not Coptic leaders joined in or supported the July 3 coup. ... This does not justify any attack on them," he said in an online statement.

More than 800 people were arrested in Friday's clashes, including local Brotherhood leaders in the provinces. The group's top figures are facing charges of inciting violence and some have been imprisoned for weeks. Morsi has been held at an undisclosed location and is facing a criminal investigation.

Morsi was accused by his critics of failing to govern inclusively and Cairo witnessed street clashes between his supporters and opponents on at least three occasions during his year in office. That fighting, however, was confined to key areas of the capital and not nearly as fierce or deadly as Friday's violence.

The revolutionary and liberal groups that helped topple Morsi have largely stayed away from the street rallies in recent weeks. The Popular Current, a leftist anti-Morsi group, said they were "astounded" by how some in the international community have denounced Wednesday's move against the Islamist protest camps as "state violence against civilians."

The statement reflected widespread sentiment that the Cairo sit-ins had to be dispersed after the government issued warnings to protesters over the past several weeks.

The government, bolstered by wealthy Arab Gulf states opposed to the Brotherhood, has branded the crackdown on Islamists as part of a wider fight against "terrorists".

Saudi Arabia's King Abdullah, whose country has pledged $5 billion in aid to interim leaders in Egypt, said the kingdom stood by the country in its fight against "terrorism and strife" — a thinly veiled reference to the Brotherhood.

Egypt's military-backed government released a statement Friday accusing "terrorist groups" and "outlaws" of confronting security forces, which it said must "stand together against a terrorist plot." The interim Cabinet authorized police to use of deadly force against anyone targeting police and state institutions a day earlier.

The Brotherhood's political wing, the Freedom and Justice Party, said in a statement Friday that the group is not backing down.

"We are not only dealing with the disbandment of a sit-in, but with the extermination of the Egyptian people to subject them to military rule with steel and fire," the group said in a statement, warning that differences will deepen.

The international community has urged both sides to show restraint and end the turmoil engulfing the nation. The European Union's foreign policy chief Catherine Ashton said Friday that the death toll over the last few days is "shocking" and that responsibility weighs heavily on the interim government and the wider political leadership in Egypt.