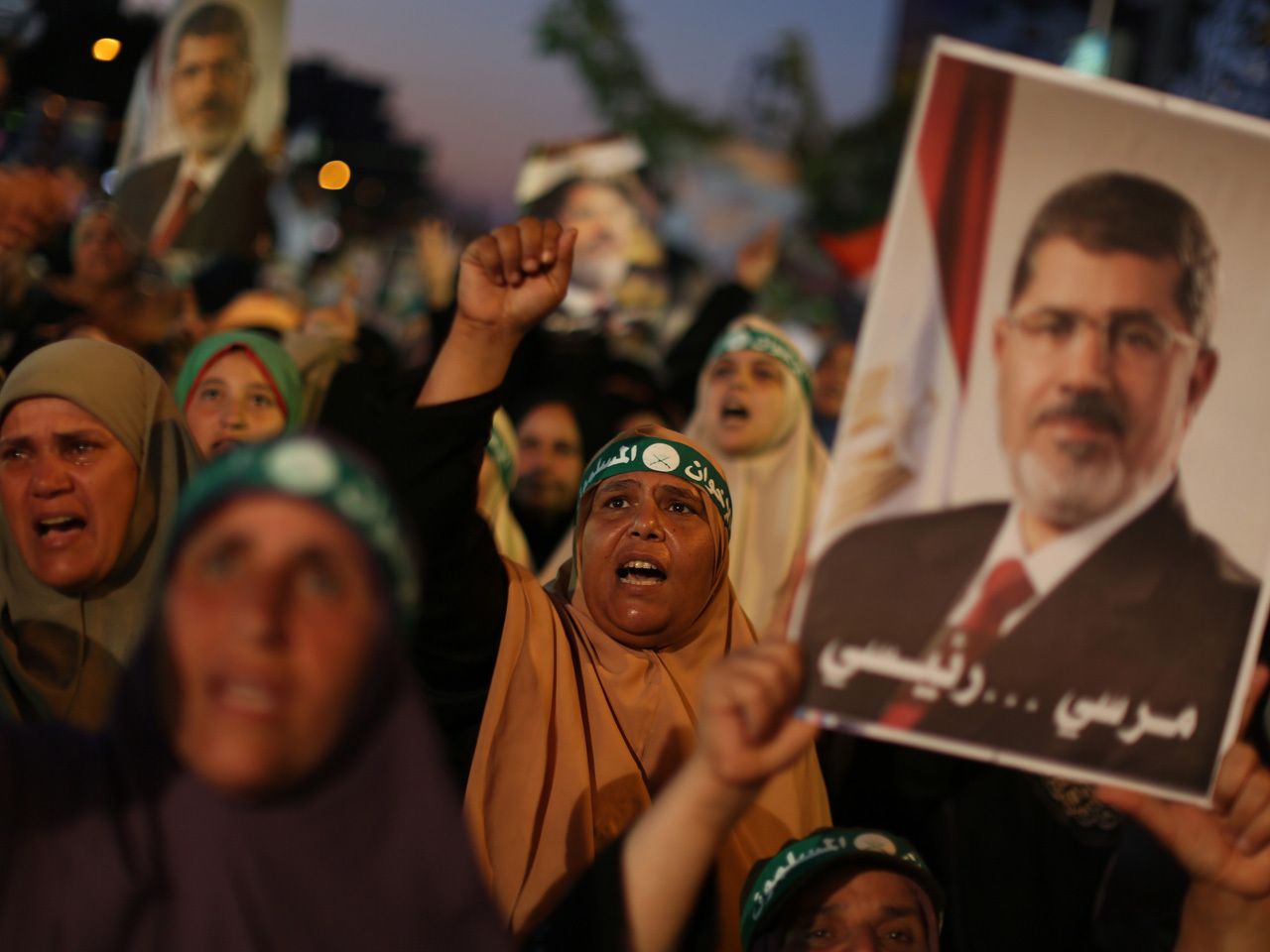 CAIRO Egypt's Muslim Brotherhood vowed Thursday not to back down in its push to restore ousted Islamist leader Mohammed Morsi to power but insisted its resistance is peaceful in an effort to distance itself from more than a week of clashes with security forces.

The group has refused to work with the interim leaders, who are trying to restore calm and pave the way for new elections early next year after the toppling of Morsi and the subsequent crackdown on other leaders of the fundamentalist Islamic group.

Morsi's ouster by the military, which followed mass protests by millions of Egyptians demanding the president's removal, has opened deep fissures in the country and prevented it from achieving stability more than two years after the revolution against autocratic ruler Hosni Mubarak.

The Brotherhood statement came a day after arrest warrants were issued for the group's spiritual leader, Mohammed Badie, and nine other Islamists accused of inciting violence after deadly clashes — the latest moves by the new military-backed government as it tries to choke off the group's campaign to reinstate Morsi.

"We will continue our peaceful resistance to the bloody military coup against constitutional legitimacy," the Brotherhood said. "We trust that the peaceful and popular will of the people shall triumph over force and oppression."

A senior Brotherhood leader, Essam el-Erian, echoed the sentiment in comments published on the website of the Brotherhood's political arm, the Freedom and Justice party.

"The people will restore their freedom and dignity through peaceful sit-ins in square, demonstrations and protests," he was quoted as saying. "All Egyptians must stop dragging the country to violence and avoid falling into the vicious circle of violent and counter-violence."

It was not clear if the comments constitute a genuine shift of tactics by the Brotherhood to abandon violence by its members amid military allegations it has been behind the street violence that has claimed dozens of lives in the past week and the dramatic surge in attacks against security forces, especially in the Sinai Peninsula, since Morsi's ouster.

The Brotherhood also denounced Wednesday's assassination attempt against a senior army commander in the Sinai, which has seen a wave of increased violence by Islamic militants angry over Morsi's ouster.

Gen. Ahmed Wasfi escaped unharmed but a 5-year-old girl was killed after gunmen in a pickup truck opened fire on his convoy in the Sinai town of Rafah, near the border with the Gaza Strip, prompting a gunbattle with the accompanying troops, security officials said, speaking on condition of anonymity because they were not authorized to speak to the media.

The Brotherhood statement insisted Thursday that the group adheres to peaceful measures in line with the teachings of Islam.

Also on Thursday, the Arabic Organization for Human Rights (AOHR) called upon the Nobel Committee to revoke the 2005 Peace Prize it awarded to Mohamed ElBaradei, a pro-democracy leader who was appointed vice president by Egypt's interim president Adly Mansour.

The arrest warrants against Badie and the others for inciting violence that left dozens dead in Cairo on Monday drew an angry response from the Brotherhood, which said "dictatorship is back" and insisted it will never work with the interim rulers.

Badie's whereabouts are not known, but many of the others are believed to be taking refuge somewhere near a continuing sit-in by the group's supporters outside the Rabaah al-Adawiya Mosque in an eastern Cairo district that is traditionally a Brotherhood stronghold.

Security agencies have already jailed five leaders of the Brotherhood, including Badie's powerful deputy, Khairat el-Shaiter, and shut down its media outlets.

The prosecutor general's office said Badie, another deputy, Mahmoud Ezzat, el-Beltagy and popular preacher Safwat Hegazy are suspected of instigating Monday's clashes with security forces outside a Republican Guard building that killed 54 people — most Morsi supporters — in the worst bloodshed since he was ousted.

The Islamists have accused the troops of gunning down the protesters, while the military blamed armed backers of Morsi for attempting to storm a military building.

The arrest warrants highlight the armed forces' zero-tolerance policy toward the Brotherhood, which was banned under authoritarian leader Hosni Mubarak.

"This just signals that dictatorship is back," said Brotherhood spokesman Ahmed Aref. "We are returning to what is worse than Mubarak's regime, which wouldn't dare to issue an arrest warrant of the general leader of the Muslim Brotherhood."

In comments to the Al-Baath newspaper on Thursday, Syria's embattled President Bashar Al-Assad said that, with the fall from power of Egypt's Muslim Brotherhood -- which he contends had used religion for its own political gain -- Arab identity is "back on the right track."

Assad has blamed an international conspiracy carried out by, among others, Islamic extremists and fundamentalist groups, such as the Syrian Muslim Brotherhood (a branch of the Egyptian group to which Morsi belongs) as being responsible for the unrest in his country.

Last month Morsi enraged Syrian officials by announcing he was severing ties with Damascus and closing its embassy in the Syrian capital.