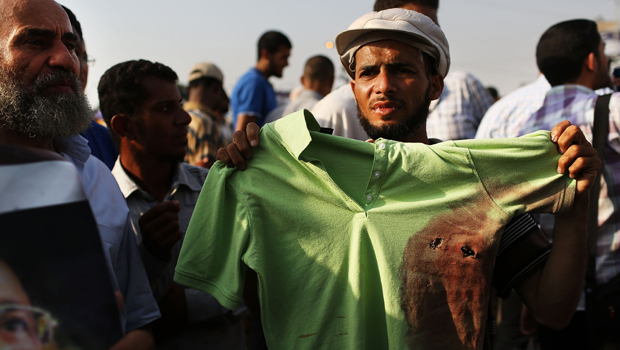 Essam el-Erian said on his official Facebook page that the transition plan to elect a new president and parliament by early 2014 would take the country back to "square one" and vowed that the Brotherhood would not drop its push to reinstate deposed President Mohammed Morsi, who was a longtime member of the group.

In response, Egypt's army chief, Defense Minister Abdel-Fattah el-Sissi, said on state TV that the military will not accept political "maneuvering," and "the future of the nation is too important and sacred for maneuvers or hindrance, whatever the justifications."

CBS News correspondent Holly Williams reported that Morsi's Brotherhood backers were expected to gather again in Cairo on Tuesday, a day after security forces killed more than 50 supporters during a protest by about 1,000 Islamists outside the Republican Guard headquarters where Morsi, Egypt's first freely elected leader, was detained last week. It was the nation's deadliest day since Morsi's ouster July 3 and led the country's top Muslim cleric to raise the specter of civil war.

The Brotherhood remains adamant that Morsi should be reinstated as the nation's president and that the military's removal of him from office amounted to an illegal coup. The ongoing tensions raise the prospect of more violence and have sparked fears Egypt could descend into chaos.

"The cowards are not sleeping, but Egypt will not surrender. The people created their constitution with their votes," el-Erian wrote on his Facebook page, referring to the constitution that Islamists pushed to finalization and then was passed in a national referendum during Morsi's year in office.

He said the military and its allies were targeting "not just the president but the nation's identity, the rights and freedoms of the people and the democratic system enshrined in the constitution."

Under the transition plan put forward by interim president President Adly Mansour late Monday, two panels would be appointed to make amendments to the Islamist-backed constitution passed under Morsi's government. Those changes would be put to a referendum within about 4 and a half months. Parliamentary elections would be held within two months after that, and once the new parliament convenes it would have a week to set a date for a presidential election.

The swift issuing of the transition plan reflected a drive on the part of Egypt's military-backed interim leadership to push ahead with a post-Morsi political plan despite Islamist rejection.

Monday's killings further entrenched the battle lines between supporters and opponents of Morsi, and the ousted leader's Brotherhood backers called for an uprising, accusing troops of gunning down protesters. The military blamed armed Islamists for provoking its forces.

Demonstrators and members of the Brotherhood said troops descended on them and opened fire unprovoked as they finished dawn prayers.

"I was in the last row praying. They were firing from the left and right," said Nashat Mohammed, who had come from southern Egypt to join the sit-in and was wounded in the knee. "We said, `Stop, we're your brothers.' They shot at us from every direction."

After a battle lasting about three hours, at least 54 protesters were killed and 435 injured, most from live ammunition and birdshot, according to prosecutors investigating the killings. Funerals for the victims were expected to be held later on Tuesday, after their bodies were released to their families, prosecutors said.

At a nationally televised news conference Monday, Army Col. Ahmed Mohammed Ali said police and troops came under "heavy gunfire" at around 4 a.m. and attackers on rooftops opened fire with guns and Molotov cocktails. A soldier and two policemen were killed, and 42 in the security forces were wounded, eight critically, he said.

While he said troops had a right to defend the facility, Ali did not directly explain how the protester deaths occurred. He expressed condolences but offered no apologies for the deaths.

A collection of videos of the clashes provided by the military to Egyptian TV showed protesters on rooftops lobbing projectiles at troops below, including firebombs and toilet seats. It also showed some armed protesters firing at close range at the troops, but it did not show what the military did. It was also not clear at what time in the fighting the videos were shot. It included aerial views of the clashes.

Several witnesses from outside the protest said the gunfire started when troops appeared to move on the camp.

University student Mirna el-Helbawi told The Associated Press that she watched from her 14th floor apartment overlooking the scene, after she heard protesters banging on metal barricades, a common battle cry. El-Helbawi, 21, said she saw troops and police approaching the protesters, who were lined up on the street behind a make-shift wall. The troops fired tear gas, the protesters responded with rocks, she said.

Soon after, she heard the first gunshots and saw the troops initially retreat backward -- which she said led her to believe the shots came from the protester side. She saw Morsi supporters firing from rooftops, while the troops were also shooting.

The Freedom and Justice party, the Muslim Brotherhood's political arm, called on Egyptians to rise up against the army, which it accused of turning Egypt into "a new Syria."

The sole Islamist faction that backed Morsi's removal, the ultraconservative Al-Nour Party, suspended its participation in talks on forming a new leadership for the country. The group is now torn by pressure from many in its base, furious over what they saw as a "massacre" against Islamists.

Reeling from scenes of bloodied protesters in hospitals and clinics, many with gaping wounds, some of Egypt's politicians tried to push new plans for some sort of reconciliation in the deeply polarized nation.

Sheik Ahmed el-Tayeb, the grand imam of Al-Azhar, the most prominent Sunni Muslim institution, demanded that a reconciliation panel with full powers immediately start work and that those detained in recent days be released. Five prominent Brotherhood figures have been jailed since Morsi's fall.

Struggling whether to fully bolt from the new leadership, the ultraconservative Al-Nour Party denounced what it called incitement against fellow Islamists. Speaking to Al-Jazeera TV, the party's chief Younes Makhyoun raised the possibility of calling a referendum on Morsi as a compromise measure.

There were multiple calls for an independent investigation into the bloodshed as a way to establish the truth and move forward.

Egypt's escalating crisis could further complicate its relations with Washington and other Western allies, which had supported Morsi as the country's first freely elected leader and now are reassessing policies toward the military-backed group that forced him out.

Still, the White House said Monday that cutting off the more than $1 billion in annual aid to Egypt was not in the U.S.'s best interests, though it was reviewing whether the military's moves constitute a coup -- which would force such a measure under U.S. law.