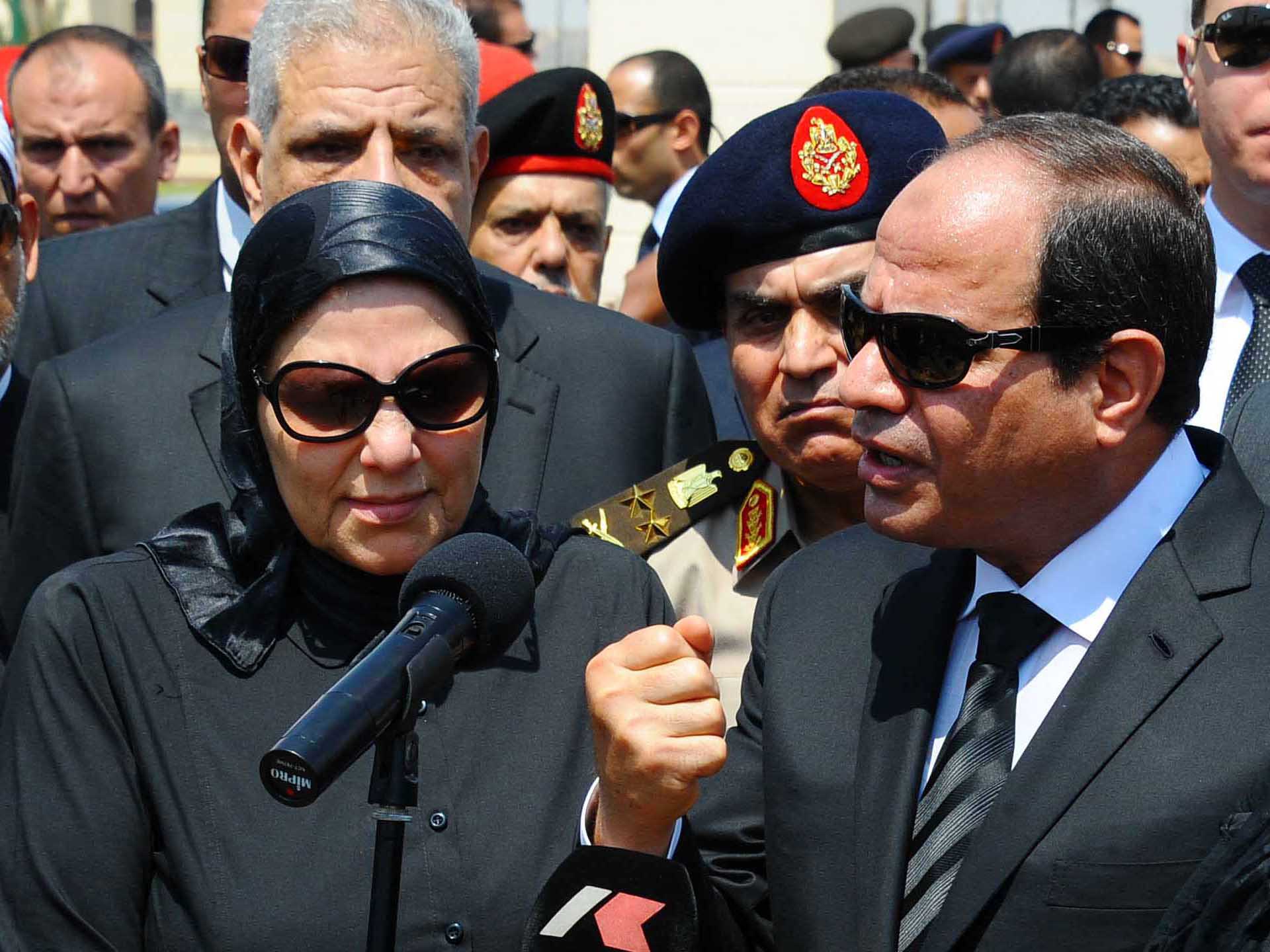 CAIRO -- Pounding his fist, Egyptian President Abdel-Fattah el-Sissi on Tuesday vowed to accelerate the crackdown and trials against extremists and bring "swift justice" after a car bombing killed the country's chief prosecutor, the first assassination of a senior official in a quarter century.

El-Sissi's comments raise the prospect of an even tougher campaign against the Muslim Brotherhood and other opponents after a 2-year-old crackdown that has already seen courts issuing mass death sentences against Islamists - including ousted President Mohammed Morsi - and police arresting thousands in sweeps against the group. Human rights groups already say judges are ignoring due process and accuse police of greater abuses.

Speaking at the funeral of Hisham Barakat, who oversaw the prosecution of thousands of Islamists, including Morsi, el-Sissi said Egypt was ready to brush international criticisms aside and free the judiciary's hand in a "battle" he said the country is ready for.

In a thinly veiled reference to jailed leaders of the Brotherhood, el-Sissi blamed the violence on those "issuing orders from behind bars," and warned, "If there is a death sentence, it will be carried out."

The high-profile assassination, in an upscale Cairo neighborhood, was an embarrassment to el-Sissi, who has vowed to bring stability to the country ever since, as then-military chief, he led the army's ouster of Morsi from office and the removal of the Brotherhood from the power it had won in elections. The July 3 ouster came after mass protests against Morsi that began two years ago Tuesday. El-Sissi was elected president a year ago.

The Brotherhood has been declared a terrorist group, accused of fueling an insurgency by Islamic militants who have stepped up a campaign of violence. The Brotherhood denies the claim, accusing the government of trying to justify its crackdown on the group. Morsi and several other top Brotherhood leaders have been sentenced to death. But they still can appeal the sentences and face multiple other trials - prompting some el-Sissi supporters to complain the process is too slow. El-Sissi's comments suggested he may aim to cut short that process.

At Barakat's funeral, El-Sissi led a procession of hundreds of state officials and military men who walked in unison as wreaths were laid. Pro-government media hailed Barakat as a "hero" and "martyr." Barakat was killed Monday in the massive car bomb that detonated as his motorcade passed in the Heliopolis neighborhood, shattering dozens of windows and left charred cars and twisted metal spread over a city block.

Television programs suspended all other broadcasts until 7 p.m. to show footage of the funeral, images of Monday's bombing and its aftermath, and religious blessings for Barakat. Security was boosted across the capital, with armored personnel carriers positioned across town from early in the day and additional checkpoints set up.

Authorities had declared June 30 - the second anniversary of the mass street protests that preceded Morsi's overthrow - a national holiday, but also cancelled all official celebrations in a sign of mourning for Barakat. Anti-government demonstrators had planned protests against June 30 celebrations, and some extremist groups have called for attacks, with police vowing to crush both.

The funeral was held at the Tantawi Mosque, newly built and named after the now-retired field marshal who headed the military council that ran Egypt in the time between the ouster of longtime autocrat Hosni Mubarak in 2011 and Morsi's 2012 election.

Authorities and pro-government TV networks quickly blamed the Brotherhood for Monday's bombing, broadly accusing it of orchestrating violence. An Egyptian militant group calling itself "Popular Resistance in Giza" claimed responsibility for the attack in an online statement, with photographs from the site of the bombing, but the claim could not be independently verified and was soon taken down. The Brotherhood denied responsibility, but blamed authorities for the violence.

Since Morsi's overthrow, authorities have launched a sweeping crackdown on the Brotherhood and other Islamists, killing hundreds, detaining tens of thousands, and handing out mass death sentences.

A long running insurgency by Islamic militants in the Sinai Peninsula then surged dramatically, with regular attacks on police and military forces killing hundreds. Attacks also targeted army and police forces elsewhere across the country, and one main extremist group has pledged allegiance to the Islamic State group and says it wants to expand elsewhere in Egypt.

Violence continued even as Egypt buried Barakat. In the northern Sinai city of Sheikh Zuweyid, a mortar shell allegedly fired by extremists at an army position fell on a private residence, killing two children and wounding three others, family members said. And in the city of Beni Suef along the Nile River south of Cairo, security officials said gunmen opened fire on a police car, killing a sergeant and wounding four others.

The family members spoke on condition of anonymity for fear of repercussions, while the security officials did the same because they were not authorized to brief journalists.