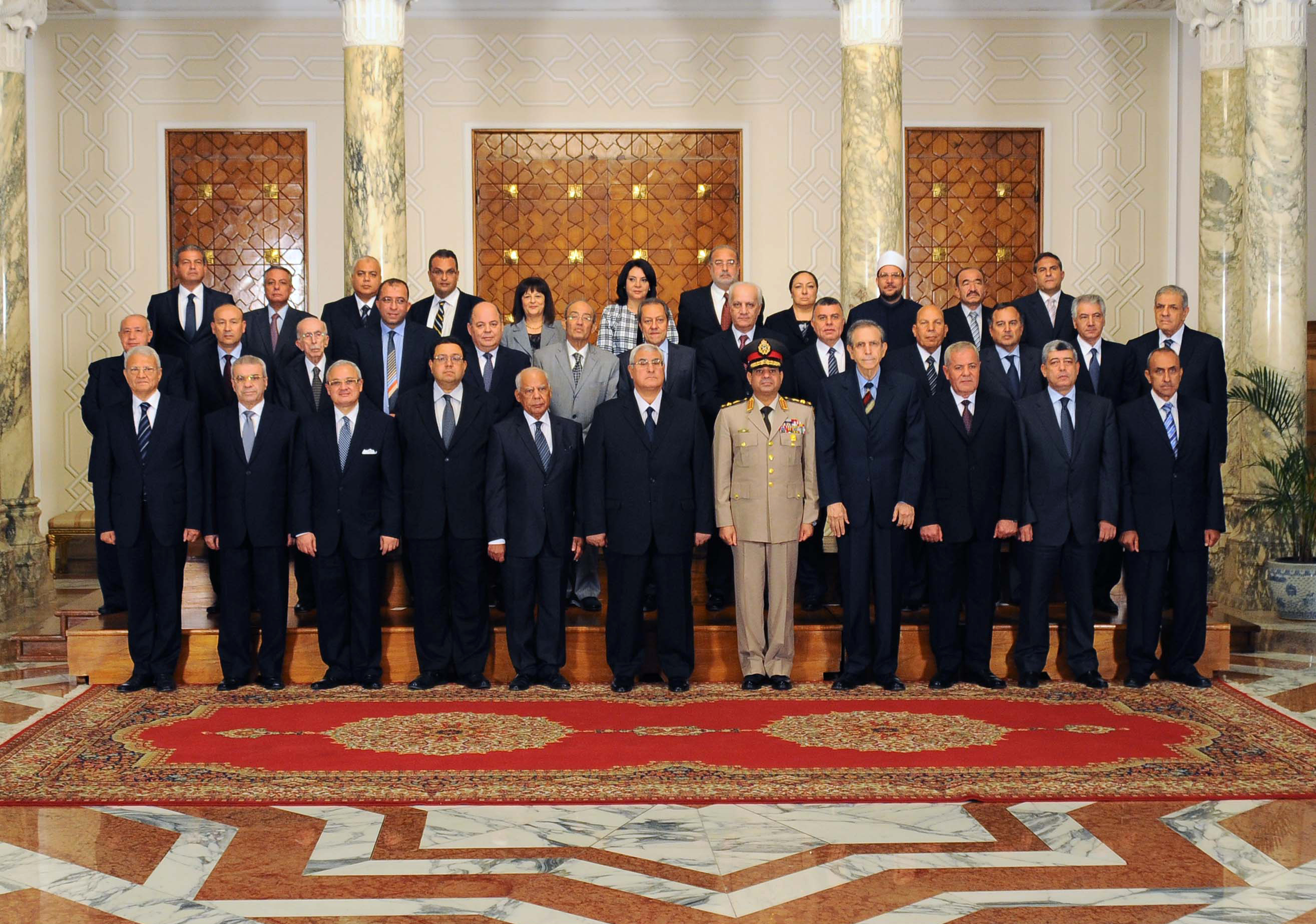 CAIRO Egypt's interim leader on Tuesday swore in the first Cabinet since the military ousted the Islamist president, giving members of the country's liberal movements key positions and naming three Christians and three women, their highest numbers in an Egyptian government.

The new government is led by Prime Minister Hazem el-Beblawi, an economist. Army chief Gen. Abdel-Fattah el-Sissi, who ousted Mohammed Morsi on July 3, retains his post as defense minister and also took the position of first deputy prime minister, an additional title given to defense ministers in the past.

The Cabinet of more than 30 ministers does not include any members of Islamist parties — a sign of the deep polarization over the removal of Morsi, the country's first freely elected president. The interim president's spokesman had earlier said posts would be offered to Morsi's Muslim Brotherhood, but the group promptly refused.

The Brotherhood has said it will not participate in the military-backed political process and vows to continue protests until Morsi is reinstated. The swearing in of the Cabinet took place hours after overnight clashes between police and Islamist supporters of Morsi left seven protesters dead in the worst outbreak of violence in a week.

The new government, sworn in by interim President Adly Mansour, reflects the largely liberal, secular bent of the factions who backed el-Sissi's removal of Morsi.

Women have a somewhat higher profile, with three ministries — including the powerful information and health ministries. Most past governments for decades have had at most two women in them.

The Morsi-appointed interior minister, Mohammed Ibrahim, remains in his post, in charge of the police. Nabil Fahmy, who was Egypt's ambassador to the U.S. from 1999-2008, becomes foreign minister.

In a nod to the revolutionary youth groups that engineered the 2011 uprising that toppled autocrat Hosni Mubarak and the massive protests that preceded Morsi's ouster, Mansour renamed the justice portfolio the transitional justice and national reconciliation ministry and gave it to Mohammed el-Mahdi, a career judge.

The groups have been campaigning for individuals responsible for the killing of hundreds of protesters since Mubarak's fall to be brought to justice. Reconciliation is a longstanding demand by most political forces to end the nation's polarization, which often spills over into street violence.

At least three senior figures from the National Salvation Front, the main opposition grouping during Morsi's year in office, were included in the government. In addition, the new deputy prime minister in charge of international cooperation, Ziad Bahaa-Eldin, is a member of the Social Democratic Party, which is part of the Salvation Front.

Mohamed ElBaradei, one of the Front's top leaders, has already been installed as Mansour's vice president.

In a first, Mansour also swore in an icon of Egyptian soccer as sports minister. Midfielder Taher Abu Zeid starred in Cairo's el-Ahly club and the national side in the 1980s. He was a member of a star-studded national squad that won the 1986 African Nations' Cup in Cairo.

The Cabinet has a total of 33 members, not including el-Beblawi.

Soon after the swearing in, carried live on state TV, the one Islamist party that supported the military's ouster of Morsi, criticized the new Cabinet for its lack of inclusion.

"This is a repeat of the same mistake the last government was blamed for, and leads to a totally biased government," the Al-Nour Party said in a statement. It said it doesn't accept "that one movement replaces another to control the government, which should be unbiased and non-partisan."

The Cabinet is to run the country as it goes through a transition plan announced last week by Mansour, which includes the formation of panels to amend the Islamist-drafted constitution that was passed under Morsi and then the holding of elections for a new parliament and president early next year.

The new leadership is driving ahead with the process despite the staunch rejection by Morsi's Islamist supporters, who are holding sit-ins in cities around the country. Morsi's supporters accuse the military of carrying out a coup that has destroyed Egypt's democracy.

Riots broke out overnight with police firing volleys of tear gas at protesters, who burned tires, threw rocks and blocked traffic flow on a main roadway running through the heart of the capital. The Brotherhood said police used birdshot and live ammunition.

At least seven people were killed and 261 injured in the clashes in four different locations in Cairo, according to Khaled el-Khateeb, the head of the Health Ministry's emergency and intensive care department. Four of the seven were killed in clashes between residents and Morsi supporters staging a sit-in near the main campus of Cairo university, according to security officials who spoke on condition of anonymity because they were not authorized to speak to the media.

Egypt's state news agency said 17 policemen were injured and 401 people have been arrested in relation to the clashes.

The violence broke also soon after the most senior U.S. official to visit Egypt since Morsi was toppled concluded a round of talks with the country's interim leaders in which he called for the Brotherhood to be included in the political process.

Deputy Secretary of State William Burns held talks with Mansour and el-Beblawi on Monday, as well as el-Sissi. He also spoke by telephone with a representative of the Muslim Brotherhood, State Department spokesman Patrick Ventrell told reporters. Ventrell would not identify the Brotherhood representative or give details on the call.