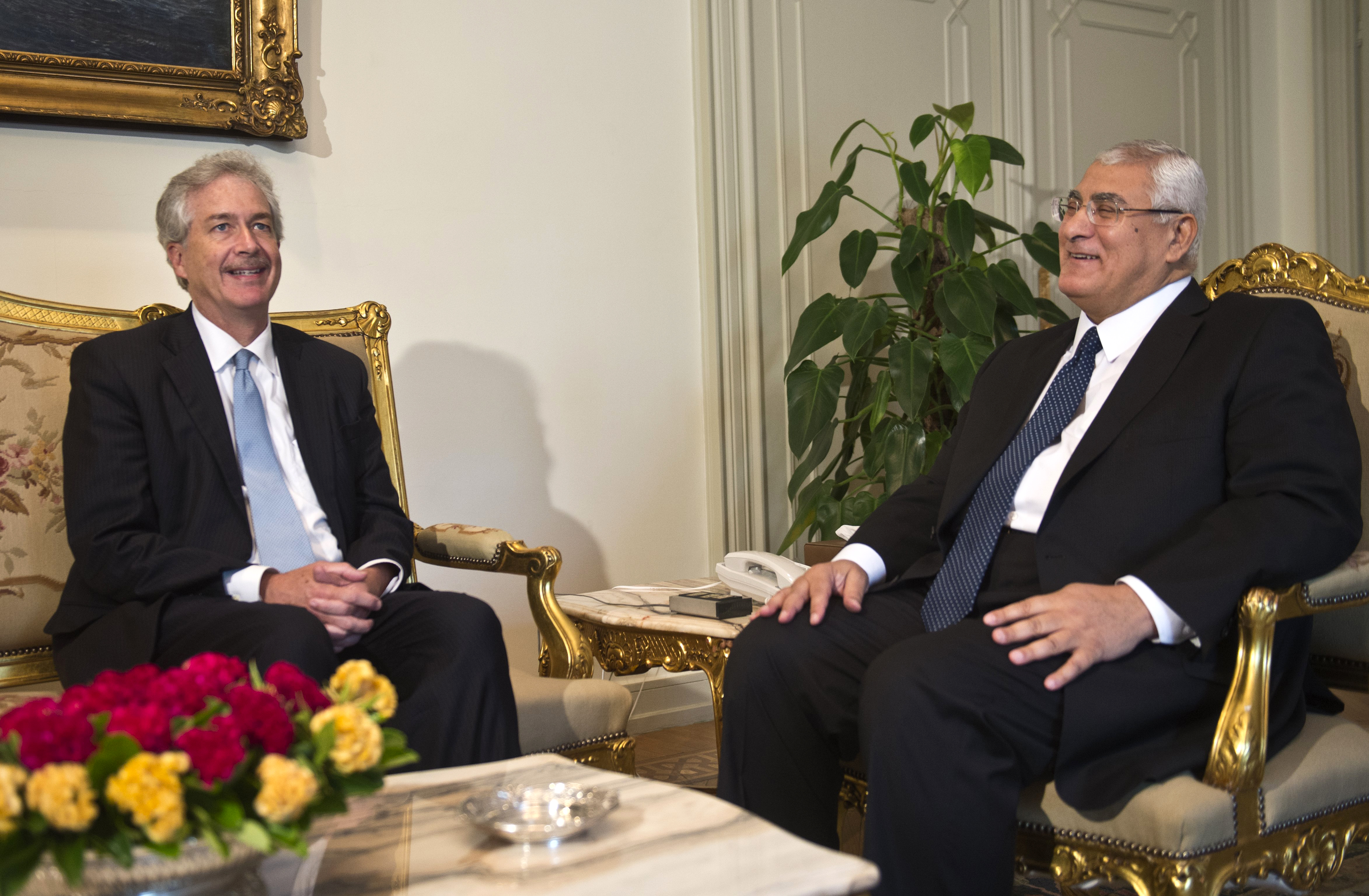 Thousands of former Egyptian President Mohammed Morsi's supporters demonstrated in the streets of Cairo as U.S. envoy Bill Burns met with the military regime that ousted Morsi from power just 12 days ago.

Burns, the deputy secretary of state, met with a range of leaders including the head of Egypt's Armed Forces, General Al Sisi, and interim President Adly Mansour. He urged them to end the spate of violence that has killed more than 90 people.

"We've called on the military to avoid any politically motivated arrests and we have also called upon those who differ with the government to adhere to their absolute obligation to participate peacefully," Burns told reporters following his meetings in Cairo. He also called for an end to the "very disturbing surge" of attacks against women.

Burns is the highest ranking U.S. official to visit Cairo since the July 3 military coup. His visit comes at a time when many Egyptians are deeply suspicious of Washington's motives due to its previous support of Morsi and its long-standing financial sponsorship the military. Burns attempted to address the tension by saying that the U.S. does not take the "side of particular personalities or particular parties."

"I'm not naive, I know many Egyptians have doubts about America's place, only they can determine their future," Burns said.

The Obama administration has avoided labeling the military-led ouster of Morsi as a coup, a move that would require a suspension of U.S. financial aid. A senior State Department official said that the main goal of Burns' trip was to pressure Egypt's leaders to hold democratic elections soon.

Burns notably avoided any mention of Morsi during a press availability held at the U.S. Embassy in Cairo. The ousted Egyptian president is believed to be under house arrest.

According to State Department spokesperson Jen Psaki, Burns did not meet with any representatives of Morsi's political party - the Muslim Brotherhood - during his two day visit to Cairo. She declined to comment on whether Burns personally asked the Egyptian armed forces chief to release Morsi or whether they discussed his future role.

"It's for the Egyptian people to decide what his role will be moving forward," said Psaki.

Yet the U.S. has tremendous influence in Egypt through its long-standing financial sponsorship of the Egyptian military. The U.S. provides $1.5 billion to Egypt through the State Department each year, the bulk of which comes in the form of military financing for Egypt's armed forces. The financial support is largely aimed at maintaining regional stability to secure the trade route via the Suez Canal as well as joint counterterrorism efforts. It also helps to entice the maintenance of Egypt's peace treaty with Israel.

The Obama administration is under congressional pressure to remind Cairo that U.S. aid to Egypt could depend on the military regime's actions. Republican Senators John McCain and Lindsay Graham jointly called for the Administration to "suspend assistance" to Egypt.

An aide explained that Sen. John McCain, R-Ariz., wants the U.S. to restrict all money provided under the authority of the State Department while still paying for counterterrorism projects and programs classified as "vital security cooperation." The full package of aid would be restored after Egypt completed its transition from military rule to an elected government.

The aide acknowledged, "It's not perfect, but could serve as a viable stopgap."

That threat is principled but limited. It would also potentially damage the U.S. defense suppliers who provide equipment, training and defense services to the Egyptian armed forces. A State Department official familiar with the existing assistance package given to Egypt said that almost all of the foreign military financing given to Egypt remains "in the U.S. economy, with few, very limited exceptions." The support includes purchases of F-16 Block 50/52 aircraft, M1A1 tanks, Apache helicopters, and Harpoon missile systems, as well as sustainment costs for other U.S.-origin equipment.

While the U.S. is not severing its relationship with Egypt's military, the visit by Burns was a clear signal that it has moved on from its relationship to Morsi and the Muslim Brotherhood. The U.S. is now trying to reach out diplomatically to cultivate relationships with Egypt's interim and future leaders. Burns met face to face with prominent members of the business community, activists and religious leaders.

In public, Burns chose his words carefully and emphasized that while the US is not taking sides it is encouraging Egypt to complete the transition to democracy that he suggested began with the 2011 overthrow of the U.S.-backed, longtime ruler Hosni Mubarak.

"Rarely do you get second chances," Burns said."We want an Egypt that we all deserve, that is the Egypt that can be a pillar of moderation and peace at a time of extremism."

The Obama administration is also hoping for a second chance to win over the increasingly skeptical Egyptian public.