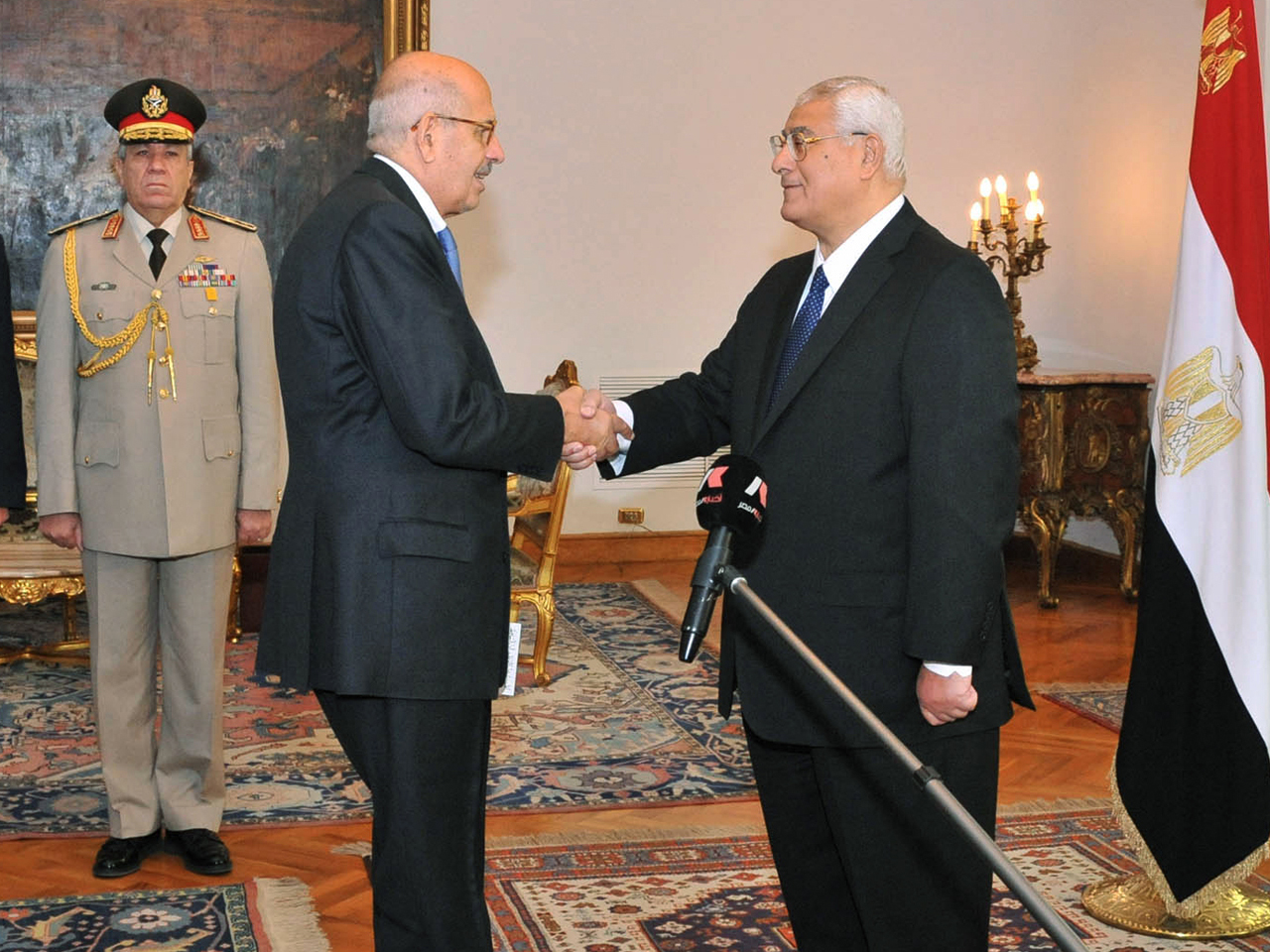 CAIRO A leading reform advocate took office as Egypt's interim vice president Sunday, reinforcing the role in the new leadership of liberals who are strongly opposed to the deposed president's Muslim Brotherhood.

Mohamed ElBaradei emerged as the top opposition leader in the campaign to oust President Mohammed Morsi, who was toppled by the military on July 3 after four days of huge demonstrations.

The military-backed government has dissolved the Islamist-dominated upper house of parliament, further angering the Brotherhood, which has won every election since the February 2011 downfall of Morsi's predecessor, Hosni Mubarak, in a similar mass uprising.

ElBaradei, 71, won a Nobel Peace Prize for his role as the head of the U.N.'s International Atomic energy Agency. He returned home to assume a role in the anti-Mubarak uprising and emerged as one of the most visible leaders in the badly fractured Egyptian liberal and secular opposition to the Brotherhood and its government.

He headed of the National Salvation Front, a coalition of largely secular groups. Tamarod, the newly founded youth movement that initiated the anti-Morsi protests on June 30 that ultimately led to his ouster, also chose ElBaradei as its representative.

ElBaradei will be tasked with handling Egypt's foreign relations, filling a position that did not exist under Morsi or previous governments. The details of his mandate remain unclear.

After the veteran diplomat was sworn in Sunday, NSF spokesman Khaled Dawoud said ElBaradei no longer heads the NSF coalition.

"He is now a vice president for all Egyptians," Dawoud said.

Egypt's interim President Adly Mansour oversaw the swearing in of ElBaradei, as the military and its government push ahead with a transition plan.

The Brotherhood is not giving in. Thousands of Morsi's supporters are demonstrating to demand his reinstatement. They are also demanding that Morsi be released from detention. He has been held by the army in an undisclosed location since his removal from office.

His Muslim Brotherhood is calling for mass protests Monday across Egypt to denounce the military's moves and the arrest of some of the group's top leaders. Morsi's supporters have characterized his removal from power as a "military coup" led by former Mubarak-era regime officials. Morsi was Egypt's first freely elected president.

The military has brushed aside the Brotherhood's demands. The new army-backed administration has suspended the constitution, drafted under Morsi, and has set forth plans to hold parliamentary and presidential elections by early next year.

Talks are underway in Cairo to select a new Cabinet that may be sworn in sometime this week, according to local media reports.

On Sunday, el-Sissi was quoted by the state-run Middle East News Agency defending the military's actions, saying that it acted "under the will of the people and in their service."

"The Egyptian Armed Forces, with all of its members and leaders, chose to serve the people and the empowerment of free will," he told a meeting of army officers, according to MENA.