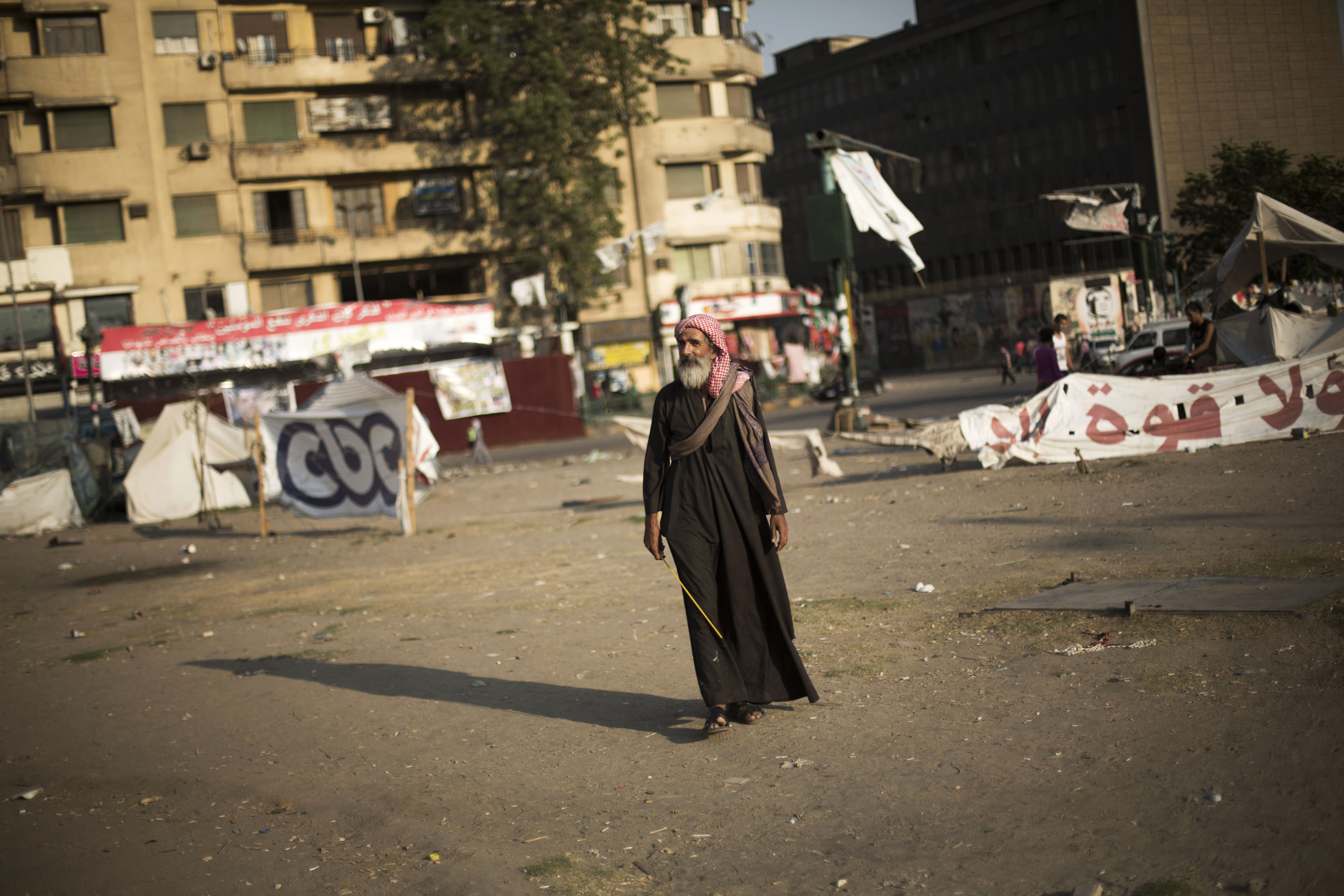 CAIRO Egypt's government on Saturday shortened a widely-imposed evening curfew, signaling that authorities sense turmoil is waning after unrest following the president's ouster threatened to destabilize the country this month.

The Cabinet's decision to cut the curfew by two hours came as Egypt's interim prime minister vowed that his government's priority is restoring security.

Egypt experienced one of the deadliest bouts of violence in recent days since its Arab Spring began in 2011. Nationwide clashes and attacks killed more than 1,000 people after the security forces cleared two Cairo sit-ins belonging to supporters of toppled President Mohammed Morsi, overthrown in a popularly supported July 3 military coup.

Since the unrest spiked, much of Egypt has been under a military-imposed nighttime curfew. Responding to citizens' demands, the government said in a statement Saturday that the 11 hour-long curfew would be in place daily for just nine hours. However, the full curfew would remain in place for Fridays, the first day of the weekend in Egypt and when last week's protests were incredibly fierce.

The easing of the curfew was announced a day after calls for protests by Morsi's Muslim Brotherhood group largely fizzled out.

The announcement Saturday came as many were rushing to try to make it home before the curfew hours began. The curfew especially has choked Cairo's bustling night life and the revenue of many businesses, hotels and restaurants.

In recent days, Cairo, a metropolis of some 18 million people, began to regain a sense of normalcy. The capital, however, remains under a state of emergency that gives security forces broad powers to arrest.

Security forces have used those powers to go after the Brotherhood's top and midlevel figures, including the group's supreme leader Mohammed Badie. Most are being accused of inciting violence.

Late Saturday, security forces said they arrested Mohie Hamed in a Cairo apartment. It was not immediately clear what charges he faces. He was a presidential adviser to Morsi and a former member of the Brotherhood's political guidance bureau.

Authorities have alleged that Morsi supporters are committing acts of terrorism and point to a string of attacks against churches and government buildings.

Morsi supporters deny their protests are violent, accusing authorities of smearing their movement and trying to cripple the once-powerful party.

"We are sorry for the number of injured... and we are all extremely sad for each drop of blood," el-Beblawi said. "But if the price is that people don't feel secure... we won't accept that."

Despite the heavy toll the violence has taken on key pillars of revenue such as tourism in Egypt, the prime minister said his country could rely on "unprecedented support from Arab countries" that are "ready to help with a lot more" than what they are already offering. Several oil-rich Arab Gulf countries, longtime critics of Morsi's Brotherhood, pledged $ 12 billion in aid to help the interim government after the Islamist president's ouster.

El-Beblawi said that security measures will not be enough on their own. He said Egypt "must go down the political path" to work out a democratic transition through reconciliation. However, he ruled out talks with those who have committed acts of violence.

The decision to use force against the sit-ins has been criticized in Washington with President Barack Obama saying that the United States would review its relations with the longtime regional ally. On Saturday, the Pentagon said Defense Secretary Chuck Hagel spoke to his Egyptian counterpart, Gen. Abdel-Fattah el-Sissi, and stressed the importance of a transparent political process that includes all Egyptians and resolves differences without violence. The two have reportedly spoken many times since the coup.

Pushing ahead with a military-backed transition plan, a 10-member-panel of legal experts appointed by the interim government finished proposing changes to the 2012 constitution. It will then be approved by a 50-member panel of public figures before going to a vote. The military had suspended the charter, which was drawn up by an Islamist-dominated assembly and passed in a nationwide referendum.

Portions of the proposed changes were leaked to reporters on Saturday, outraging some. The liberal National Salvation Front criticized the proposed electoral system for parliamentary elections, which would favor single candidates over party lists. Some fear this could bring the former ruling class of autocrat Hosni Mubarak back into power.

On Thursday, Mubarak was releasedfrom detention after nearly two years, though he still faces corruption trials and charges of complicity in the killings of protesters during the 2011 uprising that ousted him. His release raised tensions in a country already roiled by instability.

During his comments Saturday, el-Beblawi said Mubarak's release followed the law and was not a sign that the Egypt's old political reorder had returned.